New law on citizenship is legally quite sound

Illegal immigration into Assam has been a continuing tragedy for a long time. 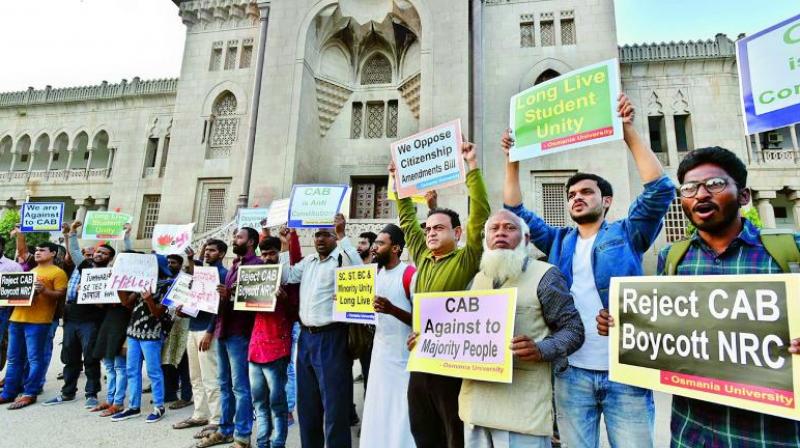 Students of Nizamia Tibbi (Unani) College boycott classes in protest against putting effect the controversial amendments in the Citizenship Act in the city on Wednesday.

The Citizenship (Amendment) Bill, or CAB in short, has now become the Citizenship (Amendment) Act, or CAA. Whenever the executive decides that the needed machinery to implement it are in place, the law can be brought in to force. It does not require the approval of any of the states in India, and therefore the vociferous opposition to the new law expressed by several chief ministers is of very little relevance.

What is the law meant to do? And is there any substance to the complaint or objection that it is anti-Muslim, meaning Indian Muslims?

The residents of every country in the world — or “State”, as referred to in international law — can be roughly divided in to two classes – that is, citizens and non-citizens. The State concerned can have its own policy and laws regulating the acquisition and determination of its citizenship. Trinidad’s policy and its laws permit Mehul Choksi, on the run from the law in India, to acquire the citizenship of that country, and we cannot question it — and can only request that State to hand him over to us. There are several countries in the world who permit dual citizenship — one can legally acquire a new passport while retaining the original one. Nirav Modi, the notorious diamond merchant, is reputed to have many such passports.

On becoming a citizen of a State, the subject becomes entitled to all the protections and privileges available under the laws of that State. Securing a voter ID or an Aadhaar card is no substitute.

Non-citizens of a country comprise mainly immigrants — citizens of other counties who enter into another with the intention of settling there, perhaps for a limited period or permanently, as distinct from visitors or tourists. Immigration generally is with the permission of the host state. However, a considerably large number enter into another country without valid travel documents, and without the permission of the host country. They are called illegal immigrants. In simple terms, they are trespassers.

Ever since India became independent there has been an uncontrolled inflow of illegal immigrants for a variety of reasons from Afghanistan, Bangladesh and Pakistan — many in search of greener pastures while many others are fleeing from religious persecution. Illegal immigration into India is a punishable offence —as it is in every other country. However, when the number of such illegal immigrants is as huge as it is, prosecuting the offenders may not always practicable.

There are at present in different parts of India an unascertained number of such immigrants living as refugees — many are subject to exploitation as cheap labour in several establishments. These illegal immigrants consist of, among others, Hindus, Sikhs, Buddhists, Jains, Parsis and Christians — all minorities in the specified Islamic countries; and also a large number of Muslims who could be safely presumed to have migrated for reasons other than religious persecution.

The Constitution of India specifies who are citizens of this country. It also recognises Parliament’s power to make laws relating to citizenship. Accordingly, the Citizenship Act of 1955 was enacted. That law has been amended several times to meet the needs of the time.

The Citizenship (Amendment) Bill sought to further amend the 1955 law to facilitate the named minorities to apply for Indian citizenship — as a one-time measure — while leaving out the Muslim immigrants.

What is objected to by lawyers and others opposing the new law is the act of ignoring Muslims from the ambit of a favour. Illegal immigrants as a class have no right to demand Indian citizenship, nor is the Indian government obliged to take any of them into its citizenship fold. The Constitution of India does not command the country to extend charity to trespassers. India, like all other sovereign republics, can and is duty-bound to take policy decisions after taking into consideration all the facts and circumstances relevant for advancing its own paramount national interests. That responsibility is of the government of the day and the exercise of the needed power for achieving that end cannot be the subject of judicial scrutiny. This principle is too well established to require the need to cite authorities.

If the legal position is different, anyone can challenge the Government of India’s decision to ban the participation of Pakistani players in the IPL tournaments — on the ground that while Bangladesh and Afghanistan are permitted to play, Pakistan is discriminated against — as a violation of Article 14. And secularism inevitably hovers around whenever Pakistan is involved.

Yes, all the illegal immigrants now in India are “stateless” persons. It is possible they are part of the 19 lakh-plus people left out of the National Register of Citizens in Assam. If and when the NRC is implemented across the whole of India, this number will be staggering.

The problem of statelessness has been for long a serious one that has eluded a solution. The United Nations had attempted a convention in 1954, which India has not ratified. The so-called developed countries are generous in tendering advice and showering abuses. International jurists are alarmed by the growing number of stateless persons -- particularly in Assam -- and they blame India for not absorbing them. My reply to them is that please take them all — and we will bear all the transport expenses.

Illegal immigration into Assam has been a continuing tragedy for a long time. However, the current violent protests since the passing of the citizenship law can only be attributed to those left out of its benefits — be it in the Northeast or in West Bengal — and others who are victims of the false rumours that new entrants will take their place.