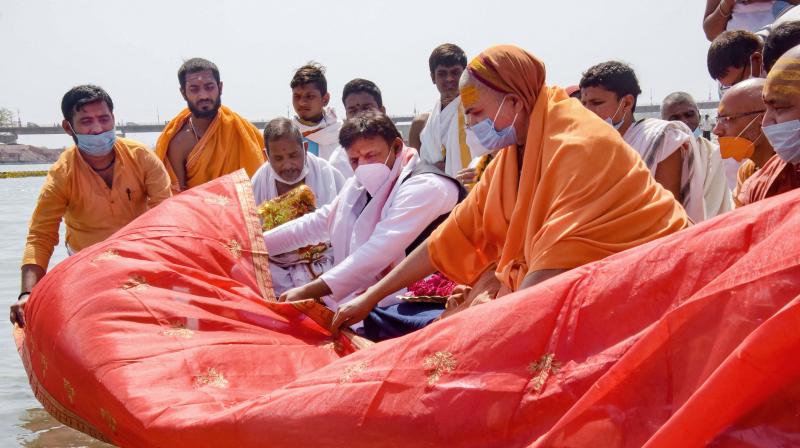 What is common to West Bengal chief minister Mamata Banerjee and former Uttar Pradesh chief minister Akhilesh Yadav? Besides the latter being a joint recipient of her letter, written last month to 15 Opposition stalwarts asking them to join forces to fight assaults on India’s constitutional federalism, both have also recently publicly displayed their Hindu identities.

Mr Yadav’s efforts at projecting his Hindu identity was unfortunately followed by his testing Covid positive, possibly because he had bathed at Haridwar during the Kumbh Mela and met with a Hindu seer, who was perhaps infected with the coronavirus. Ms Banerjee demonstrated that she was not a lesser Hindu than her adversary-in-chief, Prime Minister Narendra Modi, when she recited the Chandi Path to launch her campaign in Nandigram several weeks ago.

Ms Banerjee, as well as Mr Yadav, in ways more than one, embody the majority of India’s Opposition leaders who have since 2014, taken recourse to startling innovations to wear their hitherto invisible Hindu birthmarks on their sleeves. Rahul Gandhi’s efforts to publicly display being a Dattatreya Brahmin in the run-up to the Gujarat Assembly polls are widely known and were commented upon adequately.

Alongside widely embracing their religious identity, the (Hindu) Opposition leaders now mask past commitment and efforts at increasing the political representation of religious minorities, especially Muslims. They also no longer promise minority-specific development programmes with the same gusto as they once did. Some years ago, Sonia Gandhi had bemoaned that her party suffered electorally due to its “pro-minority” image.

The contagion of overanxious display of one’s Hindu identity is in complete contrast to the unanimity in the political class, at dawn of the republic in 1950, that India’s majority community was obligated to make the religious minorities, especially the Muslims, feel secure, respected and instil in them the belief that the majority was sensitive to their faith and tradition.

The chief minister of Bihar, Nitish Kumar, drew strength from this unspoken agreement when he mocked Prime Minister Modi for his refusal to wear a skull cap offered by a Muslim cleric in 2011. It is useful to recall Nitish Kumar’s didactic advice: “In a country as diverse as ours, symbols must be respected. In order to maintain harmony with everyone, sometimes one has to wear a cap and sometimes one needs to sport a tilak.”

Barely eight years after this taunt, the fortunes have reversed. Mr Kumar is now a much-diminished executor of Mr Modi’s policies, albeit with a baulk at times on matters related to hard Hindutva. The Prime Minister has also successfully politically coerced his opponents to become mindful of the ways of the “New India”, where being merely sensitive towards the concerns of religious minorities is deemed a political handicap, or perilous.

The Opposition parties are driven by their assessment that in the people’s perception, whatever may be shortcomings of Prime Minister Modi and his government’s deliveries, he has one most important “accomplishment” beneath his belt -- that he has “fixed” Muslims. The Opposition parties are driven by their perception of majoritarian elation and are now unwilling to risk loss of support among Hindus. In more states than one, the Opposition to the BJP is its veritable B-team. Take the Arvind Kejriwal-led Aam Aadmi Party for instance in Delhi.

This explains Akhilesh Yadav’s conscious decision to refrain from critiquing Hindu nationalistic politics in recent years, especially after 2017, the way his father Mulayam Singh Yadav, the Samajwadi patriarch, did three decades ago when he pledged in October 1990 not to allow even a single “bird to flutter” over Ayodhya’s skies on the day of the Vishwa Hindu Parishad’s promised commencement of the “kar seva” at the disputed site. The impression that there has a complete reversal is the outlook of large sections of Hindus towards Muslims is reflected in several of Mamata Banerjee’s decisions too, most visibly in the significantly lesser number of Muslims she has nominated as candidates in these elections.

Ms Banerjee and Mr Yadav have another commonality. Prashant Kishor and his brand of ideological agnosticism is part of their campaign to return to power, the former’s currently and Mr Yadav’s in 2017. Since his advent in India’s political space as an electoral strategist, first for Mr Modi and later for others, Mr Kishor has preached that political commitment to ideas and policies is redundant. Winning polls, he asserts, is all about reading the data right, an effective communication strategy and making the right moves at opportune moments. His philosophy enables him to move to one “client” party from another. Mr Kishor's belief in post-ideology politics is reflected in the weakened commitment to political beliefs of Ms Banerjee, Mr Yadav and several others.

His influence was visible in Ms Banerjee's letter to the Opposition leaders. It was an unambiguous effort at opening a door for a post-poll pact with the Congress while staking claim to a national role in the event of the Trinamul Congress returning to power in West Bengal. But Ms Banerjee chose not to criticise the BJP’s corrosive ideology. Instead, she used the passage of the law that clipped the powers of the Delhi government and held it as evidence of the ruling side’s objective of establishing “one party authoritarian rule in India”.

Ms Banerjee’s letter was silent on the abrogation of Article 370 and taking away Jammu and Kashmir’s statehood, a precursor to the law clipping the Delhi government’s powers. The letter listed the reasons why the Opposition parties must forge a common cause. But none of these were ideological. Ms Banerjee limited herself to listing instances showing that the BJP consistently undermines India’s federal character; hang-handed governors, using investigative agencies to target political opponents, limiting fiscal independence of states, dissolution of consultative bodies, worsening Centre-state relations and so on.

Mamata Banerjee has not sought allies among the Opposition parties to protect India from a majoritarian onslaught. Instead, it is a call to unite to safeguard its federal character and autonomy. Although people in more than one hundred seats are still to vote, the letter is the final proof of the BJP winning this round politically. Whether it has secured West Bengal electorally too shall be known only on May 2.