Anand K. Sahay | RSS & BJP: Is there a shift in the equation?

The RSS can obfuscate — speak assertively, but also as a ventriloquist, when needed 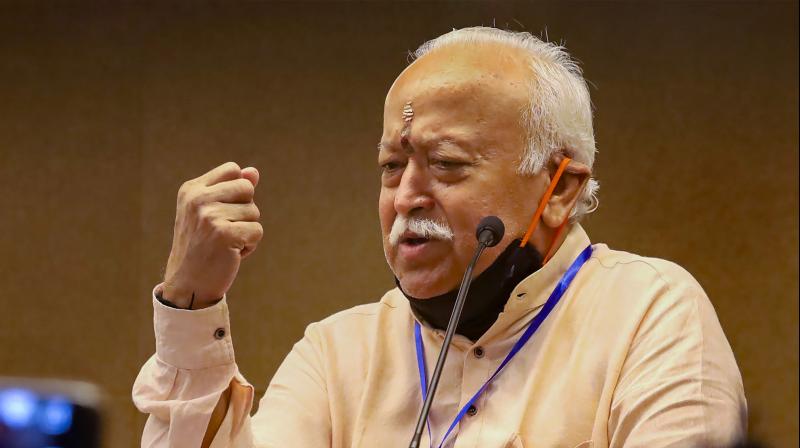 Some recent observations on India’s handling of the Covid-19 pandemic emanating from the highest levels of the RSS — praised by many as a selfless, nationalist outfit doing social service, and denounced as a “fascist” or “militarist” body by a range of critics  have left the country mystified. This is because the RSS is the inspiration behind the founding of the BJP.

The RSS can obfuscate — speak assertively, but also as a ventriloquist, when needed.

It works in a bamboo curtain kind of inner culture. As with China’s power pyramid, words coming out of the RSS’s Nagpur headquarters lend themselves to multiple plausible meanings.

This is probably because the organisation was suppressed in certain periods like after Mahatma Gandhi’s assassination, but also because before the BJP’s rise to power, it sought to play down its ambition that its creation should proceed to capture power.

Now that the BJP is at the pinnacle of political power and not any rival, the RSS should no longer have to deploy the artifice of stealth in negotiating relations with the holders of national power. But here lies the irony: though the BJP, the election-fighting instrument it created, is in power in New Delhi, the RSS still appears to be careful in the way it says things out aloud. The reasons are up for speculation.

However, in the context of the Narendra Modi government’s conspicuous failure to tackle Covid-19’s second wave, as well as its striking failure to offer the country hope -- with crematoriums and graveyards becoming increasingly out of reach, oxygen, medicines and hospital beds running short, and hundreds of (presumably Hindu) corpses floating downstream from UP in the holy Ganga -- RSS chief Mohan Bhagwat’s piercing words, although couched in calm delivery, may give the government cause for anxiety.

On May 15, winding up the “Positivity Unbounded” lecture series sponsored by the RSS, Mr Bhagwat gave a pep talk on “collectively” facing the present “difficult” times, when there might be a death in every family one knows, and go into a fightback mode against the virus. But he also said: “The people, administration, government each got into gaflat!” In other words, they goofed up; they failed to gauge the situation and respond appropriately.

These may have been the words of an Opposition leader, except that they weren’t.

The RSS no doubt intends that the Modi government regain its composure and is ready to help. But perhaps there is also something else implied here: there is no immediate rush. But should there be a run on the bank, the RSS may prefer to be forearmed.

Some Assembly elections are due next year, including in Uttar Pradesh, the nation’s biggest state where the BJP did far from well in the recent panchayat polls. If popular disenchantment surfaces in a big way in voting behaviour in the Assembly election early next year, UP, which sends up the largest contingent of BJP MPs, the RSS is unlikely to settle down to regard the situation with equanimity.

And the way to prepare for any eventuality may be to start cultivating the ground from now to be able to guide key changes in the government’s top tier if push came to shove. All of this must be done in good time and none of this can be spelt out. But it is hard to miss that a new particle now hangs in the air.

Through one policy disaster after another —demonetisation, GST rollout, the sapping farmers’ agitation (which continues), the disconcerting unemployment graph, the RSS stood foursquare behind the government. But the Covid-19 disaster, with corpses floating down the holiest river for Hindus, is a different matter — indeed a different kind of matter.

In a recent newspaper article, a senior RSS figure, Ram Madhav, who until recently was a BJP general secretary, asked the “political leadership” — meaning the top government leadership — to show “a little more transparency, a little more engagement with the public, and a little more openness to constructive criticism and enlightened expert opinion from outside the government… After all, the lives of millions are at stake”. It does seem the RSS is signalling that all is not well.

Wearing BJP colours, two RSS “pracharaks”, or full-time volunteers dedicated to the spread of Hindu nationalism in a country of many religions and spiritual mores, have made it to the top. But Atal Behari Vajpayee and Narendra Modi had framed a very different relationship with the mother organisation, the RSS, upon becoming Prime Minister.

Mr Modi has been on the whole solicitous, his BJP predecessor in office was more correct, rather than deferential. A part of the reason may have been that Vajpayee’s government had to depend on a host of secular coalition partners for survival.

Speculation still abounds on this issue, but it’s evident the relationship between the BJP and RSS is not a carefully studied subject.

While well-known research studies exist on the RSS itself, the sociology of the organisation, its inner workings, and the way it seeks to articulate power in relation to the BJP (earlier Jan Sangh) and influence in Hindu society more generally, has not been adequately studied. The literature is mostly in the nature of self-serving propaganda, hagiography, or trenchant criticism from critics.

The Jan Sangh was created under the RSS’s aegis in 1951, and the BJP in 1980. Both were the same thing in spirit. However, at no point did the Jan Sangh wield national power or become a mass party. The RSS, its creator, was the shadow that loomed over it. The spirit of the RSS is the fountainhead of the culture and organisation of the BJP too. But the BJP has become something of a mass party. It has secured power at the Centre for which it doesn’t depend on allies. Therefore, its government and leadership may not be a pushover if the RSS showed displeasure.

On the other hand, the BJP can’t fail to notice that it’s the spread of the RSS itself in a communalised polity that ineluctably promoted the BJP’s rise as a mass party. At every level of the party and government, the levers are in the hands of RSS personnel.

It’s evident that the RSS-BJP leadership is shot through with contradictions. What factors give one the upper hand and not the other, at a time when the BJP holds national power, is a complex subject and needs attention. Which entity will prevail is a matter of great interest to the entire country.