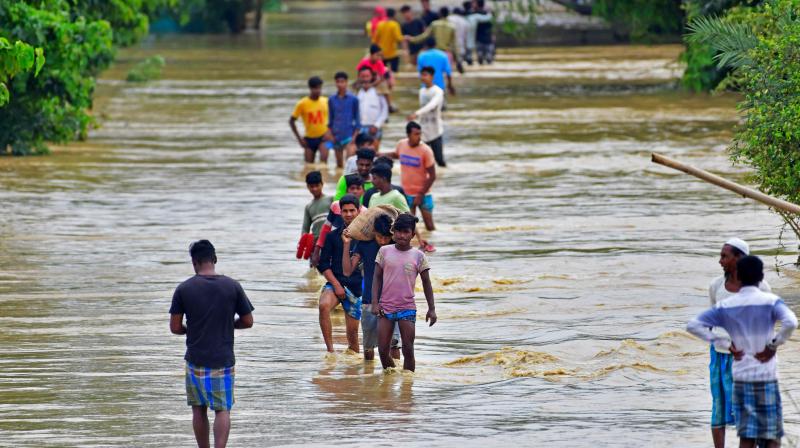 Villagers wade through a flooded road after heavy rains in Hojai district of India's Assam state on May 19, 2022. (Photo:AFP)

In the age of climate change, seemingly disparate phenomena are actually deeply connected. This makes joining the dots and thinking beyond silos not only desirable but imperative. Take one of the hottest headline items of the day — the surging price of wheat in the country.

One reason wheat prices have shot up has to do with the intense heatwave that struck parts of India from March. That affected the wheat crop just as the global wheat supply had shrunk due to Russia’s invasion of Ukraine. Ukraine is one of the world's top wheat exporters. Russia and Ukraine together have nearly 25 per cent share in the global wheat market.

Geopolitical developments in Europe meshed with international trade and the heatwave in India. The result affects everyday life in the country, including the contents of Delhi resident Kumar’s tiffin box.

Kumar, 45, packs three rotis instead of five for lunch when he leaves for work in a South Delhi beauty parlour. Ten kg of Shri Bhog atta, which cost Rs 180 six months ago, now costs almost Rs 100 more, he says. The soaring price of even the cheapest brands of wheat flour or atta has forced him to cut down on his intake: “The three children must be fed first.” Kumar doesn’t have a ration card which would entitle him to subsidised wheat and rice from the public distribution system. His wife and three children depend solely on his monthly earnings of Rs 15,000.

Heatwave is in the news, but is by no means the only extreme weather event striking India. As I write, landslides and floods are wreaking havoc in the Northeast; nearly 500,000 people have affected in Assam alone.

Not every extreme weather event can be definitively linked to climate change, but scientists say climate change is leading to more frequent and more erratic and extreme weather — rising number of heatwaves, cyclones, droughts, unseasonal and heavy rainfall, lightning strikes, landslides, rise in sea level and more that is happening in the country and around the world.

There is a wealth of data that makes it obvious that these extreme weather events are worsening and that they are impacting the Indian economy — both the city and the countryside — with knock-on effects on human lives and livelihoods.

According to an analysis by Abinash Mohanty of the Council on Energy, Environment and Water (CEEW), an Indian think tank, over 75 per cent of India’s districts, home to over 638 million people, are now extreme climate event hotspots.

The 2020 CEEW study, the first-of-its-kind district-level profiling of India’s extreme weather events, notes that the frequency of landslides, heavy rainfall, hailstorms, thunderstorms and cloudbursts, associated with floods, has surged by over 20 times between 1970 and 2019. In the last 15 years, 79 districts recorded extreme drought events year-on-year, exposing 140.06 million people annually. The yearly average of drought-affected districts, the study says, increased 13 times in this period.

Since 2005, 24 districts in India have seen extreme cyclone events every year. This meant 42.50 million people being exposed to storm surges, intense cyclones and other associated events.

One trend flagged by the study that leaps out — the pattern of extreme events such as flood-prone areas becoming drought-prone and vice-versa — has changed in over 40 per cent of Indian districts.

All these trends have consequences for the economy and India’s workforce. The ongoing heatwave in parts of the country has brought to the fore many data points about the impact of heat stress on the world of work. There is a International Labour Organisation study that says India is one of the countries most affected by heat stress, and that it lost 4.3 per cent of working hours in 1995. More worryingly, India is projected to lose 5.8 per cent of working hours in 2030, says the ILO.

That climate change-fuelled “extreme weather events” is becoming a pressing economic concern can be gauged by what the Reserve Bank of India has to say. The April 2020 RBI Bulletin notes climatic conditions, comprising the two key indicators, precipitation and temperature, play a crucial role in the overall health of the Indian economy. It says that the occurrence of extreme weather events like floods/unseasonal rainfall, heatwaves and cyclones has gone up in the past two decades, and that some of the key agricultural states in India have been the most affected by such events.

The RBI references two separate indices that were constructed at the all-India level — the temperature index and precipitation index — to gauge their impact on food inflation and economic activity indicators.

The results, it says, indicated that weather conditions, especially rainfall, has a strong influence on the food inflation trajectory. Among food items, vegetable prices are the most vulnerable to rainfall shocks. The results also showed that weather conditions have a significant impact on key indicators of economic activity such as demand for electricity, trade, tourist arrivals, and tractor and automobile sales.

India’s earth sciences ministry recently issued an open-access publication about climate change which points out that “in response to the combined rise in surface temperature and humidity, amplification of heat stress is expected across India, particularly over the Indo-Gangetic and Indus river basins”. It also points out that sea surface temperature (SST) of the tropical Indian Ocean has risen by 1°C on average during 1951-2015. This, it notes, is “markedly higher than the global average SST warming of 0.7°C, over the same period”.

Given the deep connections between extreme weather events and the economy, it is vital that policymakers do not think in silos and that all development plans factor in climate change and its impacts. As of now, there is a growing awareness about the challenges ahead. But the responses are still in silos.

Rising heat, for example, has serious implications for water security. How seriously are we working towards managing water? How are we storing it effectively and reducing losses due to evaporation? And the moment you think water, you must factor in energy and food — there is a clear nexus between the three.

The government has set up structures for coordinated responses. Every state government has a climate change cell, and there is the Prime Minister’s council on climate change at the top. In November, the media reported that the council had not met since its first meeting on January 19, 2015. In almost every state these cells are ignored by other ministries.

The climate crisis is here. Our governance model needs an overhaul to tackle the biggest threat of the century.