The Army has good reason to be pleased with Imran’s accession, which many believe was pre-scripted. 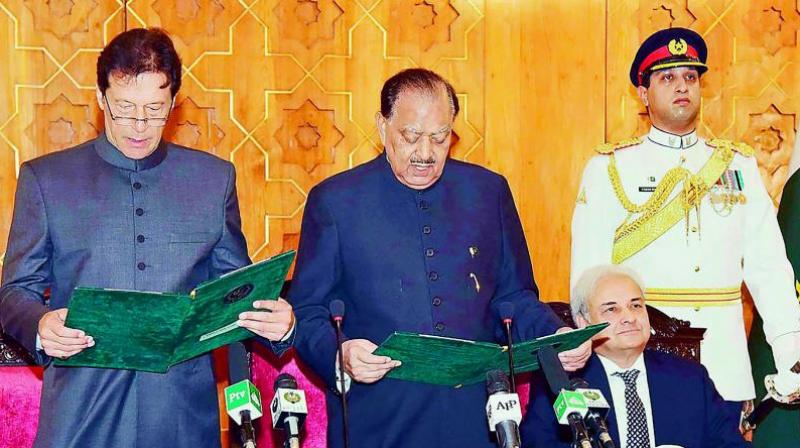 Imran Khan, former cricket hero turned politician, took the oath as Pakistan’s 22nd Prime Minister on Saturday, ending a two-decade quest for the country’s top job. Among the onlookers at Aiwan-e-Sadr, the presidential palace, was the Chief of Army Staff, looking on with avuncular pride.

The Army has good reason to be pleased with Imran’s accession, which many believe was pre-scripted. Even though Mr Khan’s party, Tehrik-e-Insaf, had not quite won the July 25 elections, it secured the largest number of seats, falling short of a simple majority by a full 20 seats.

Nevertheless, the PTI’s seat tally increased from an initial 116 (out of 272 general seats) to 125 within days as nine Independents joined Mr Khan and a few obscure parties, including Pakistan Muslim League(Q) and Balochistan Awami Party, offered support to ensure his crowning.

The media had predicted something like this would happen. The powers that be had deemed the country’s two largest parties — Pakistan Muslim League(N) and Pakistan Peoples’ Party — were to be marginalised and Imran’s party pushed through, albeit in a weakened state.

That’s exactly how it turned out. The election itself was dubious. While the mainstream parties complained of outright rigging, observers from the European Union and others suggested the Pakistan establishment didn’t provide a level playing field for all parties.

It appears the Pakistan Army GHQ in Rawalpindi achieved its objective of having a weak, pliant PM in charge of the civilian government. It may be recalled Imran has a history of close association with the Army. In 2014, he and Canadian Islamist Tahirul Qadri laid siege to Islamabad, demanding Prime Minister Nawaz Sharif’s resignation for allegedly rigging the 2013 election. That display of street power was punctured by the disclosure of Mr Khan’s own party chief, Makhdoom Javed Hashmi, who dropped a bombshell suggesting that the mass uprising led by his party was actually a military plot.

With a malleable PM in place, the generals could well sit back, thinking all’s well that ends well. But perhaps things may not turn out that way.

Flushed with the prospect of power, Imran at this juncture might not sense the hollowness of his electoral victory but down the road, as he tries to make his mark in tackling Pakistan’s looming crises and turning it into an Islamic welfare state, he could well collide with the Army.

Not that Imran will necessarily prove obtrusive, uncooperative or power-hungry as former PM Nawaz Sharif, who is now languishing in jail, but the unwritten laws set by the Army which excludes national security, foreign policy and military budget allocations from civilian purview is bound to frustrate his efforts to make his mark on a moribund nation.

His most immediate challenge will be twofold: how to manage an impending foreign debt repayment crisis and deliver on his promise to fix the corruption and opacity involved in the country’s most ambitious project to date, the $62-billion China-Pakistan Economic Corridor, better known as CPEC.

The CPEC project has increasingly become controversial in Pakistan as its implementation is hardly benefiting locals. All the big contracts have been awarded to Chinese companies, who even bring in Chinese labour and managers to execute the projects. The crumbs have been awarded to local cronies of the previous political leadership.

Before the elections, Mr Khan had promised he would publicly examine the CPEC agreements made by Nawaz Shairf’s government. But if Mr Khan doesn’t back down, he will come up squarely against the Army, that has effectively taken the CPEC project under its wing by declaring it a matter of national security.

The bigger problem of the CPEC has to do with Pakistan’s indebtedness. It now appears that Pakistan, under Mr Sharif, had indulged in reckless external borrowing, pushing up foreign debt by a whopping $30.9 billion from June 2013 to $91.8 billion (as per State Bank of Pakistan) in March 2018. Today, external liabilities amount to over 30 per cent of its GDP.

Pakistan, according to the International Monetary Fund, has to cough up $27 billion this fiscal to service its external debts. This figure is expected to swell to an unmanageable $45 billion in another two years. The real problem is that Pakistan continues to consume more than it can afford and its current account deficit now runs at almost $2 billion a month. It also has to pay the Chinese through the nose for the CPEC project. Things are getting out of hand as import costs rise due to a constantly eroding Pakistani rupee and hardening oil prices.

Not surprisingly, Pakistan needs an immediate bailout, as often in the past. Feelers were sent out for a $12 billion IMF package, but nothing has come of it as the United States has objected to a bailout, which it claims will only help repay the Chinese for their spending on CPEC.

The other implications of an end to easy foreign money inflow include a declining GDP growth rate — expected to decline from 5.6 per cent in fiscal 2018 to 4.7 per cent in 2019.

Pakistan’s leadership will also increasingly have to deal with the nation’s embarrassingly huge youth bulge. Jihad and suicidal missions can offer temporary employment to only a limited number of young men, the vast majority of whom would be seeking more permanent employment in this world. This problem is only getting worse as Pakistan’s population growth rate remains one of the highest in the world.

This time, Washington is unlikely to be Pakistan’s saviour and China too will hesitate given that it has racked up a current account deficit for the first time in two decades and President Xi Jinping wants the economy’s overall debt level reduced.

Pakistan, therefore, cannot rescind on its financial commitments to China, on which it has come to depend militarily as well for frontline weapons systems. Given this scenario, Mr Khan’s election was the easy part, staying on the seat could well prove scalding.