Global famine is on the way: World faces its biggest crisis

Modern food production has its issues as well, especially when it comes to meat. 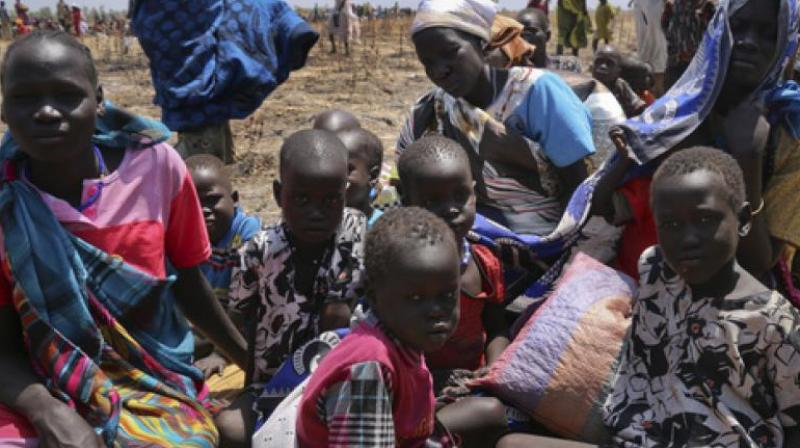 A family waits for food assistance to be distributed in Thonyor, Leer County, one of the areas in which famine has been declared, in South Sudan. (Photo: AP)

Famine, the third Horseman of the Apocalypse, is getting ready to ride. A withered husk of a man atop a black steed, he holds in his hands weighing scales. Because when famine rides, food becomes the most scarce and thus most valuable commodity in the land. On that day, it is in the cruel scales of Famine that a handful of flour will be measured against gold.

From symbolism to statistics: in its latest world hunger report, the UN tells us that the number of hungry people in the world has risen to over 821 million — that’s one in nine people alive today — and is projected to increase further. The world to come — and its coming sooner than we would like — will be one of deprivation, scarcity, and the dull ache of a long empty belly.

Yes it is true that that global food production is and has been rising in absolute terms and will likely continue to do so but the growth is nowhere near the rate needed to feed the 10 billion humans projected to be inhabiting this world in 2050.

We’re also running out of land to grow food on. In the last 40 years alone, we have lost one third of all available farmland to erosion, population growth, pollution and a whole infernal battalion of lesser demons.

And yes, it’s going to get worse thanks to the recently inducted Fifth Horseman of climate change, which is due to take a serious toll on food production worldwide. And yes, once again the brunt will be borne by the “developing world” (that’s us!) and also by those unfortunate countries most at risk from climate change (us again!).

While you chew on that, consider that each year 1.3 billion tonnes of food — a third of all that is produced — is wasted. In developing countries, this is due to unintentional losses due to poor logistics and infrastructure, but in the wealthy parts of the world it is quite literally thrown away. The extent of this loss is such that the UN estimates that if only a quarter of this perfectly edible food were to be saved, it would ensure no one goes hungry anywhere in the world.

Modern food production has its issues as well, especially when it comes to meat. Globally, animal farming takes up a staggering 83 per cent of all available agricultural land while providing only 18 per cent of our calories.

Here’s another fun fact though: the UN report also reveals that the number of obese and overweight people in the world may be close to a billion.

While most of the world’s hungry are located in Asia and Africa, obesity knows no borders and while the US and China lead in this race, African countries like Ghana (where 37 per cent of the adult population suffers from stunting due to childhood malnutrition) have seen obesity increase by 500 per cent in just a few decades.

At first glance, this may look like the effect of income inequality — and in part it is — but then consider that low-income groups in the US have seen a massive rise in obesity, as they spend their limited money on (cheaper) processed food which fills the belly while starving the body. In true dystopian style, while many are not getting the food they need, many are also not getting the nutrition they need from the food that they do get.

No surprise then that a more modern interpretation, coming from Neil Gaiman and Terry Pratchett’s Good Omens series, shows famine as a businessman with a line of “foodstuffs”, which look, taste and smell like food but contain absolutely no nutritional value. In short, while the classic famine takes away your food, the modern famine gets his kicks seeing you eat your way to starvation.

Where to go from here? Certainly, reducing meat consumption would go a long way, and technologies like lab-grown meat and meat substitutes can help, if related taboos can be overcome. The same goes for genetically engineered crops, which are the subject of much controversy. Locally, new trends in urban farming and space-saving vertical farming can make a difference. In South Asia, a priority must be given to increasing yields, but not at the cost of sustainability. Priority must be given to improved logistics and storage, which will curb food losses. Luckily, we have at least a few organisations working on reducing food wastage, and we need to support them while also changing our highly wasteful habits. If not, rest assured the future will eat us alive.