Sanju Verma
The writer is an economist, chief spokesperson for BJP in Mumbai and author of Truth & Dare — The Modi Dynamic. 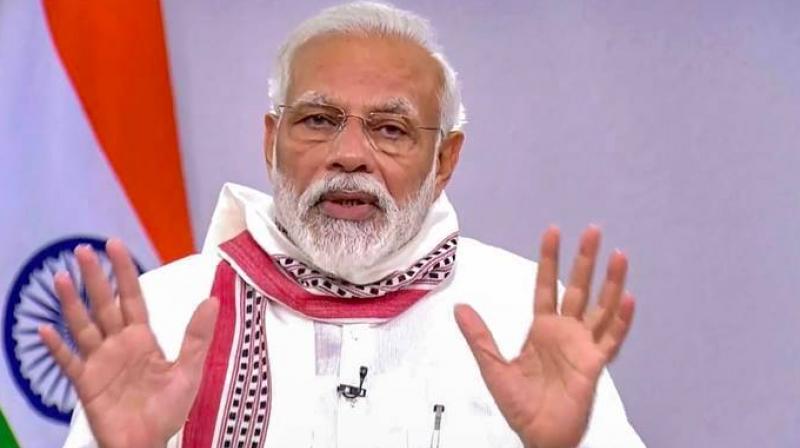 Again, during one of his inspiring Mann ki Baat speeches in October 2019, Mr Modi recounted real life anecdotes of ordinary women who chose to do extraordinary things to make a difference to others’ lives.

Mr Modi shared the story of Major Khushbu Kanwar who is considered “Bharat ki Laxmi” by many; Khushbu is the daughter of a bus conductor and she led the all-women contingent of the Assam Rifles.

Narrating another motivating story, Mr Modi spoke about a 92-year-old woman who had been providing free drinking water to travellers at Gwalior railway station for many years.

Again last year, during his Vijayadashmi address in October, Prime Minister Modi said, “In the last nine days we worshipped Ma Durga. Taking that spirit ahead, let us always work towards furthering empowerment, as well as the dignity of women. During Mann Ki Baat, I had spoken about ‘Ghar ki Laxmi’ and ‘Bharat ki Laxmi’. This Diwali, let us celebrate the accomplishments of our Nari Shakti. This can be our Laxmi pujan.”

On August 15, 2020, in keeping with his women-centric governance model, Mr Modi pointed out that now women have an opportunity to have permanent employment in the Indian Army and Indian Navy, something that was unthinkable earlier.

He added, “Whenever women got an opportunity, they made India proud and further strengthened it. The country is now determined to provide equal opportunities of self-employment and employment to women. Now, women are also working in coalmines. Our daughters are scaling heights by flying fighter planes.”

But if there was one thing that stirred the imagination of 1.38 billion people more than anything else, it was Prime Minister Narendra Modi’s unabashed acknowledgement from the ramparts of the Red Fort of how 6,000 Jan Aushadhi Kendras had provided around five crore sanitary pads at Re 1 to poor women in rural India. Despite all the bombast about 21st century women, the harsh reality is that even in the most educated, elite, modern and seemingly civilised societies, menstruation is often a topic that is taboo.

It should not be, but it has come to be a source of embarrassment, with men squirming at the very mention of the word “menstruation”, not only in traditional, dogmatic societies but even in supposedly progressive ones, both at home and abroad.

Hence, for Mr Modi, an international leader of towering repute, to openly embrace and mainstream the issue of women’s hygiene is not mere symbolism. By doing what he did, Prime Minister Narendra Modi sent a strong message.

From defining the nation’s first menstrual hygiene protocol, amending the Medical Termination Pregnancy Act of 1971, giving women reproductive rights over their bodies and increasing the foetal gestation period from 20 to 24 weeks, welcoming more women recruits in the NCC, which will now be extended to border and coastal areas, to criminalising the inhuman and unconstitutional practice of instant triple talaq and, setting up a committee to explore an increase in marriageable age from 18 to 21 years for women, the Modi government has truly exhibited a bold, woman-friendly approach which is both mature and modern, and something which no other government in post-Independent India can dare boast of.

Banning commercial surrogacy, which had led to mushrooming of illegal IVF and surrogacy clinics, was yet another bold move by the Modi government last year.

According to the new laws, only married Indian couples, who have been together for a minimum of five years and been deemed medically unfit by a doctor or practitioner to conceive children naturally, will be allowed to depend on a surrogate.

The move now makes it difficult for people to run a “rent a womb” business and exploit women in the economically weaker sections, who are often left in the dark about their rights.
Women’s empowerment is not just about gender equality and gender justice. It also means more jobs, equal opportunities for growth, higher safety, protection of the girl child and, most importantly, just “letting women be”.

If there is one leader who has recognised women for what they are and who they are, it is Prime Minister Narendra Modi. Whether it is providing free cooking gas via the famous PM Ujjwala Yojana to over 8.5 crore poor households, financial inclusion via 22 crore new bank accounts for women only from a total of 40 crore Jan Dhan accounts, the Mahila Shakti Kendras to empower rural women with opportunities for skill development or the Mahila-E-Haats for facilitating direct contact between vendors and buyers, the Modi government has always been ahead of the curve.

The government’s holistic approach in making Beti Bachao Beti Padhao a practical and successful reality is best amplified by the fact that out of 25 crore loans given under the Mudra Yojana, 70 per cent of the beneficiaries have been women.

The entrepreneurship ecosystem for women has taken a massive leap of faith under Mr Modi and this is just the beginning, with a lot more to come.

The writer is an economist, chief spokesperson for BJP’s Mumbai unit and bestselling author of Truth & Dare — The Modi Dynamic