BJP has already pushed TRS into a spot by making GHMC elections about nationalist Hindutva, a template it has not really been tested against 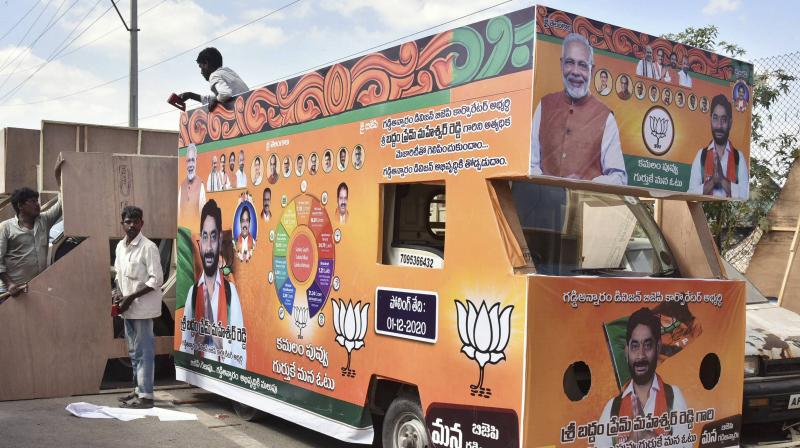 Workers prepare a campaign vehicle for the BJP, ahead of the GHMC elections, in Hyderabad, Thursday, Nov. 19, 2020. (PTI)

The municipal elections underway in Hyderabad might have a political significance nationally, if TRS chief and Telangana chief minister K. Chandrashekar Rao’s (KCR) strategy helps his party trounce the newest challenger to power — the Bharatiya Janata Party. If KCR succeeds in nipping the saffron party’s surge in the bud, he might reveal a perfect playbook to counter the seemingly unstoppable juggernaut of Prime Minister Narendra Modi.

It is only of footnote value, not headline material, that the Congress, which ruled India for two terms based on the strength of members of Parliament Telugu people sent to Lok Sabha, and which enacted and implemented the formation of Telangana, is rapidly declining in the state. The interesting part is KCR himself pushed the weak Congress, the principal challenger to TRS as recently as the 2018 Assembly elections, from the general ward into the ICU.

In that election, which the TRS had foresight to schedule ahead of completion of term, and delink state elections from national elections to avoid having to face the Modi wave, the pink party retained power with a bigger majority, winning 88 out of 119 seats. The Congress returned as the principal Opposition party, with 19 seats, while the BJP secured a lone seat. The MIM, ever friendly to whoever is the ruling party, won seven seats.

Ignoring the mandate for over two months, without even declaring a cabinet, the TRS boss ensured defections from the Congress, till it was finally split by over two-thirds, and Congressman Mallu Bhatti Vikramarka lost the status as leader of the Opposition. The void left by the Congress proved to be a signal to the BJP to make it an all-out direct battle with the TRS for the state.

The TRS lost two of its advantages in this possibly irreversible decline of the Congress and consequent rise of the BJP — a split in anti-incumbency votes will cease and a party with a more effective election machinery will have to be faced.

The BJP has shown it has the striking firepower. Debutant D. Arvind defeated sitting MP K. Kavitha, daughter of KCR, in Lok Sabha elections for Nizamabad, a hurt the TRS still nurses. The recent snatching of Dubbaka byelections by the BJP has consolidated a perception Telangana is now a predominantly two party state, notwithstanding the factor X that is Owaisi-led MIM.

The BJP has already pushed the TRS into a spot by making the elections to Greater Hyderabad Municipal Corporation (GHMC) about nationalist Hindutva, a template the TRS has not really been tested against. The BJP has declared that the GHMC elections are between them and the MIM, accusing the TRS of appeasing Muslims, especially Owaisi brothers, and being their sidekicks. The TRS could laugh off charges of nepotism, family rule and corruption when they were hurled by the Congress, but the same attack from the BJP could have a sharper bite. Above all, the TRS cannot arm-twist the BJP the way it could do the Congress.

With the reputation and political future of TRS working president K.T. Rama Rao, son of KCR, heavily invested in the urbane electoral climes of hi-tech Hyderabad, CM Rao is taking nothing to chance because in Indian politics, like in many Indian families, the loss to a daughter is painful, but the loss to the image of a son, that too heir apparent, is nearly politically fatal.

Taking the reins into his own hands, KRC has firstly declared that his party would fight both the BJP and the MIM based on secular values. KCR has announced that none of their party leaders or candidates would visit temples, mosques, churches or any other places of worship as part of their campaign. Wearing of religious identity won’t be a vote-winning tactic of the TRS.

This will be backed by giving a second lease of life to the idea of a Federal Front, a non-Congress, anti-BJP national front and making it about a direct confrontation between KCR and Narendra Modi as principal rivals on the national scene. This seems congruent with the perception that KCR will hand over the reins of the state to his son soon and take a one-way fight to Delhi.

Just as the TRS has seldom faced a tough rival like the BJP at the state-level head-on, Mr Modi and BJP, too, has not yet seen a challenge as KCR can alone mount in India. KCR understands the value of rhetoric and optics as few in Indian politics, besides the Modi-Shah duo. He believes in disruptive moves and being unpredictable, keeping everyone guessing. He would seldom waste a stone to kill one bird.

KCR would like to take on the BJP pan-India with a front which would acquire the image of India itself — a union of states — hence the KCR-initiated front would be a union of state-level parties and leaders. Kashmir, Uttar Pradesh, Bihar, Bengal, Tamil Nadu, Odisha, besides neighbouring Andhra Pradesh, are early potential recruits for this front.

Making every state election about Modi versus his front will be crucial to KCR’s strategy — make every election harder for the BJP across the country, by involving every part of the whole, all the time, leading to 2024. Thus, even a loss in, say Delhi or Jharkhand, which BJP presently dismisses as a local loss with no impact at nation level, would henceforth become a win for the anti-Modi front, and thus a score.

KCR will likely pitch secular federalism, marked with good governance, high on welfare and development, with a strong stress on inclusivity as key ideological differentiators, with a stress on “true”. KCR believes this will reduce the ability of the BJP to coerce Opposition leaders with other means, aka, use of Central agencies.

It is his calculation that the long-term incarceration of leaders in Kashmir would have become impossible, if leaders of all states had stood up with them, together. Drawing a leaf from Lincoln, KCR will now put his marketing skills to convince all state leaders to the mantra — let us hang together, lest we be hanged separately.

The TRS has a great understanding of how to build a narrative and sustain it through innovative programmes and schemes. It is hardened in social media battles. It can come out with attractive slogans and put up a convincing counter narrative. It can lure, or coerce, the media. Above all, KCR can put Telangana’s own success in input investments for farmers, water as a right for all Indians, jobs, infrastructure and universal heathcare as rival models — the Hyderabad model versus the Gujarat model.

His timing is perfect, too. The Congress is at its weakest and can be dictated to support the front at any later date. Most regional leaders are also too weak to resist; they will happily follow anyone giving them hope against Modi’s BJP.

But will KCR emerge the Pied Piper or end up doing an encore of 2019, when his high vision was reduced to gallantry of Don Quixote class, will start becoming clear when Hyderabad votes for its 150 municipal wards on December 1, and its results are declared on December 4.

With a final caveat — it will be by paper ballot. Does a low-tech election in a hi-tech city finally hold the key to a different result in the next Lok Sabha? KCR will hope the answer is yes.