For a country where 65 per cent of the population lives of agriculture and 36.4 crores are poor this is nothing short of suicidal 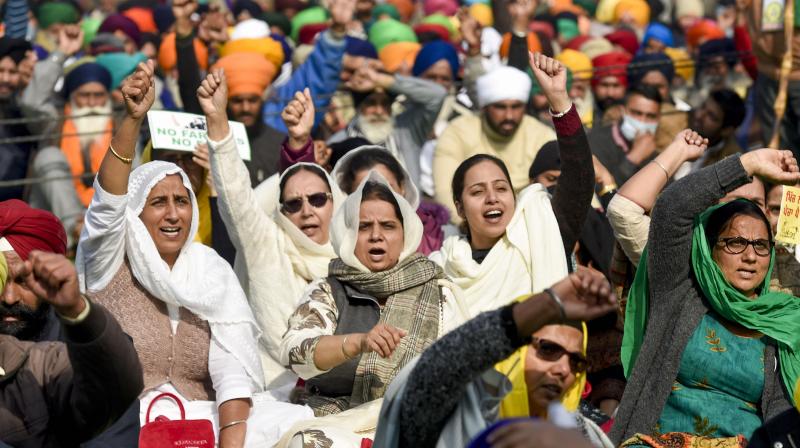 Farmers shout slogans during their protest against the new farm laws, at Singhu Border in New Delhi on Wednesday, December 16, 2020. (PTI/Ravi Choudhary)

With the farmers’ agitation now entering the 25th day jamming the borders of the national capital the time has come to ask a fundamental question, Are the farm bills aimed at addressing a problem that the government is even terrified of acknowledging?

The NDA/BJP government inherited a robust economy from its predecessor the United Progressive alliance despite protestations to the contrary. Between 2004 and 2014 the India economy grew at 7.8 per cent year on year for 10 long years with 2004-05 as the GDP base year. At the revised base year 2011-12 the growth figure is 8.13 per cent. Despite strong global headwinds in the form of the economic meltdown of 2008 and the Eurozone crisis of 2011 this robust rate of economic growth not only increased the size of the economy, created jobs and employment opportunities but, most importantly, it helped create a robust social security infrastructure in the form of Right to Information, Mahatma Gandhi National Rural Employment programme (MNREGA), Right to free and compulsory education Education (RTE) and the National Food Security Act, to name but a few of the initiatives in this direction. As many as 27.1 crore people were lifted out of poverty between 2004 and 2014. The flipside of this high growth paradigm was high inflation but then again there is no free lunch in life. On balance, ordinary people benefited as growth with equity brought all around prosperity.

The NDA/BJP government could not sustain this growth trajectory and then on the 8th of November 2016 it inflicted a grievous blow on the body economic. It demonetised 500 and 1,000 rupee notes thereby sucking liquidity out of the economy. In its overzealousness to reform it overlooked a basic fact that India was a 2.6 trillion dollar formal economy riding on an almost similar sized non-formal economy and all cash is not black money. This was followed by a badly implemented Goods and Services Tax (GST) regime that further sucked the remaining liquidity out of the economy.

Even before Covid-19 knocked the bottom out of India’s economic paradigm the Indian economy was in serious trouble. In H-1 (April-September) of 2019-20, the total flow of funds from banks and non-banks that include public issues, commercial papers (CPs), external commercial borrowings (ECBs) and foreign direct investments (FDIs) crashed by 87.63 per cent to Rs 90,995 crores. It was Rs 7.36 lakh crore for the corresponding period of 2018-19 as per to the Reserve Bank of India's (RBI’s) monetary policy report.

On the 23rd  of March, 2020, the day before the country went into the harshest lockdown on planet earth, Parliament passed the Union Budget of 2020-21 of Rs 30.42 lakh crores. The projected revenue receipts were 22.45 lakh crores leaving a fiscal deficit of 7.96 lakh crores. With the Indian economy now officially in recession and expected to contract by over 10 per cent the country is up the proverbial creek without a paddle, with all budgetary projections up in the air.

What does this economic havoc have to do with farm bills? Quite a lot, in fact. For it has everything to do with the food subsidy component of the Union Budget.

The Food Corporation of India is the state instrumentality that oversees the purchase and supply of food grains. Founded in 1965 under the Food Corporations Act it is mandated to procure food grains at Minimum Support prices (MSP) stow them, create buffer stocks including a strategic reserve of food grains in addition to disseminating them through the Public Distribution System (PDS) to identified beneficiaries.

The Union government determines the MSP for purchasing food grains as well as their distribution price also called issue price. This is the rate at which food grains are supplied to the states. Variance in these two rates along with supply costs are recompensed by the government to FCI in the form of food subsidy. The FCI, therefore, is totally reliant on the central government and does not have any other sources of revenue.

Prior to 2014 the Union government used to try and fund the entire food subsidy as a line item in the Union Budget. In other words the money for this activity was appropriated directly from the Union budget. Even then the FCI used to borrow some amount of money from banks backed by a sovereign guarantee or even get a ways and means advance from the Union government. However, these repayments were manageable. When the UPA demitted office FCI had a debt of 91,409 crores.

In 2016-17, realising that the economy was in trouble primarily because of demonetisation and mismanagement from 2014-16 and to window dress its budgetary deficit, the government moved a substantial component of the food subsidy off budget and compelled FCI to borrow from the National Small Savings Fund (NSSF). It is entirely another matter that lending to government  organisations like FCI was not the initial mandate of NSSF. The National Small Savings Fund was set up in 1999 to pool together all the money collected from small saving schemes. This includes public provident fund deposits, savings deposits and savings certificates such as the National Small Savings Certificate. The fund is administered by the ministry of finance.

As a consequence of this sophistry as of 1st of April 2021 FCI’s projected borrowing from NSSF would be to the tune of 3.5 lakh crores backed by a sovereign guarantee of the Government of India, meaning, thereby, if FCI defaults, the government would be liable. This amounts to 10 per cent of the current year’s Union Budget. In the Union Budget for FY 2020-21 while the budgeted food subsidy was Rs 77,983 crores, FCI’s borrowing from NSSF was pegged at 1.36 lakh crores.

With a devastated economy and crumbling public finances, the government hit upon a harebrained scheme. In the name of reforms it wagered that it would pass off public procurement to private players. This would kill two birds with one stone; first, it would bring the food subsidy deficits under control and since the government would not procure it also then would not have to distribute food grains thereby ending its obligation under the National Food Security Act.

For a country where 65 per cent of the population lives of agriculture and 36.4 crores are poor this is nothing short of suicidal. The government must grow the economy so that it has enough revenue to meet its commitments. It cannot roll up the social safety nets of farmers and the poor, namely MSP and the NFSA. It must, therefore, repeal these ill-conceived farm bills and give an unequivocal statutory guarantee that it would continue open-ended public procurement at MSP and would fulfill its obligations under NFSA.