Afghanistan once again a flashpoint

This month, at least 22 people were killed and 41 wounded in a suicide blast at Afghanistan’s Supreme Court in Kabul. 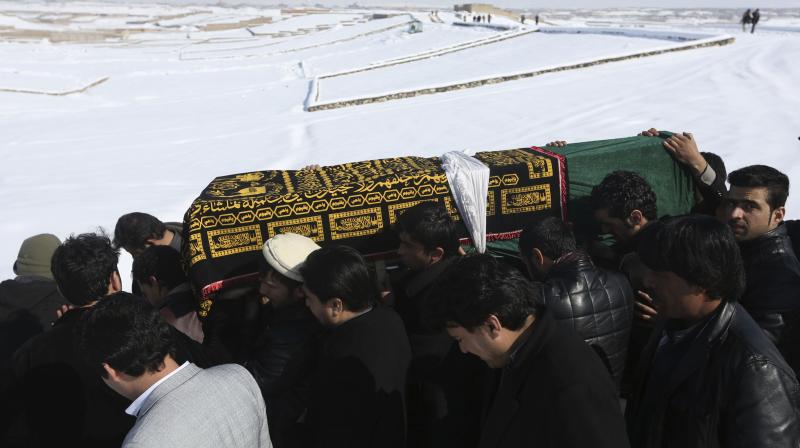 Men carry the coffin of a relative who died in a suicide attack on the Supreme Court in Kabul, Afghanistan. (Photo: AP)

A series of unfortunate events is fast propelling Afghanistan towards yet another flashpoint. This time, conflicting global interests, uninhibited foreign intervention and a worsening humanitarian crisis could combine to tear Afghanistan apart and open up a maelstrom populated by terrorists, heroin kings and death-dealing warlords.

The bells started tolling ever since Pakistan Army guns and rockets opened up along Afghanistan’s eastern borders over the weekend. As the shelling commenced, in an apparent retaliation to the terrorist carnage at a Sufi shrine in Pakistan, thousands of Afghans fled their homes, leaving uncounted dead behind.

Despite repeated warnings from the feeble government in Kabul, the Pakistan Army has continued its shelling into eastern Afghanistan and claimed it had a right to retaliate given Kabul’s refusal to act against the terrorists and their “foreign” masterminds who had carried out the shrine attack.

Islamabad also closed the crucial Torkham and Spin Boldak border ports and summoned the Afghan ambassador, who was handed a list of 76 terrorists to target. Pakistan Army chief Gen. Qamar Javed Bajwa threatened military action against the terrorists in Afghan territory, prompting Kabul to declare that “no country and no power will be allowed to intervene militarily in Afghanistan”.

The gathering war clouds are only one part of the gloomy portents. Already, 2017 has been a year of utter mayhem. Horrendous terrorist attacks and the forcible repatriation of thousands of Afghan refugees from Pakistan has made life even worse for Afghanistan’s suffering millions.

In January, a Taliban bomb attack in Kandahar left 11 people, including five diplomats from the United Arab Emirates, dead. The UAE ambassador, injured in that blast, succumbed to his wounds last week.

A few days later in the same province, the Taliban gunned down 43 Afghans, including 16 police officers. This month, at least 22 people were killed and 41 wounded in a suicide blast at Afghanistan’s Supreme Court in Kabul. The fingers all pointed towards Pakistan but the only response Kabul received were denials.

Things will get worse this year. A spokesperson for the US-led Resolute Support (RS) mission in Afghanistan last week warned that the war will intensify next fighting season as the Taliban have already started preparing for it. The RS mission believes that 20 out of 98 world terrorist groups are active along the Afghanistan-Pakistan de facto border.

Afghan security experts believe Daesh, as the Islamic State is often referred to, will increasingly infiltrate Afghanistan since they are on the verge of being defeated in Syria and Iraq. Pakistan also will provide more support for Taliban to intensify the war in Afghanistan.

Four factors are set to complicate matters in Afghanistan, the first of which is increased Pakistani support for the Taliban. As terrorist incidents rise within Pakistan and the Pakistan Army, the guardian of the nation, fails to stop it, there will be increased pressure on Rawalpindi to bring about a quick and decisive resolution of the lingering Afghan problem.

The Pakistan Army’s only Afghanistan card is the Taliban, which could now be used with greater efficacy given the new dynamics with Russia and increased desperation in Washington.

Pakistan’s decades long effort to legitimise the Taliban received a boost following Russia, China and Iran’s formal recognition of the Taliban as a party in the Afghan dispute.

The Taliban, in turn, supported the trilateral meeting in Moscow between Russia, Pakistan and China, where the three nations agreed to negotiate with the Taliban leadership, which desperately wants to clear itself from the United Nations sanctions list.

Recent Russian manoeuvres cosying up to Pakistan and the Taliban could completely upset regional equations. While Moscow claims that accommodation with the Taliban is necessary to counter the rise of Daesh, which could threaten Central Asia and southern Russia, its real motive is to challenge Washington’s writ in the region.

At the same time, uncertainties in Washington arising out of President Donald Trump’s lack of clarity on Afghanistan and his larger policy aimed at distancing the United States from myriad global crises could further undermine the Kabul regime.

It is also far from clear how the Trump administration will deal with Moscow’s bid to rope in the Taliban, Pakistan, Iran and China to create a powerful, new lobby for Afghanistan.

Rahmatullah Nabil, former head of the National Directorate of Security, recently claimed that Pakistan has stepped up its intervention within Afghanistan to show the world, and the US in particular, that it has legitimate security concerns vis-à-vis that country.

Nabil claimed that Rawalpindi is trying to show that it is itself vulnerable to terrorist attacks even while it continues to train, arm and fund terrorist groups for its own ends.

The Afghan situation is all the more fragile given the ineffectual leadership provided by its President, Ashraf Ghani Ahmadzai.

President Ghani had initially cold-shouldered New Delhi, assuming that such a stance would please the generals in Rawalpindi. That this was naiveté in the extreme was proved by the continuing Taliban assaults on regime forces and, in the end, the stream of reports implicating Pakistan’s generals in the mounting conflict compelled President Ghani to dump his pro-Pakistan policy and reach out to New Delhi.

But India is constrained by geography and geopolitical equations even though a flashpoint in Afghanistan cannot but be bad news for India. The Afghan vortex is too near home; it will invariably suck in world powers, render them more proactive and trigger a series of events that could perhaps forever destroy peace in the region. And the pity of it all is that Pakistan, whose unrelenting quest for regional domination has spawned the Afghan tragedy, would once again be cajoled, bribed and rewarded by world powers seeking its assistance in defusing the latest crisis.