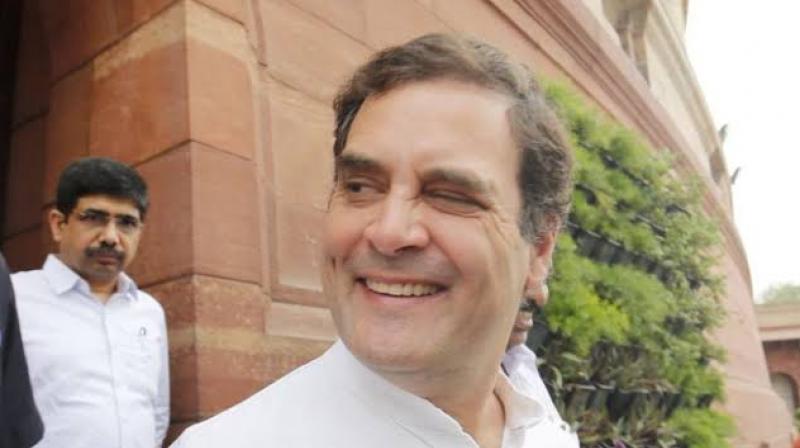 Though the leadership issue in the Congress has been put on hold for now because of the coronavirus threat, it looks like Rahul Gandhi is itching to return as party president. This came through when he addressed his first press conference last week from the Congress headquarters after his resignation as party chief. Besides the fact that he chose to speak to the media at a formal briefing, Rahul Gandhi’s statement in his closing remarks that he was willing to do this more often, was a clear giveaway that he wants his old job back.

Congress insiders, however, maintain that the Nehru-Gandhi scion can only come back as party chief through an electoral process. There has been a growing demand in the Congress, especially from the younger members, that fair elections be conducted for membership of the party’s working committee as well as the president’s post. This, of course, is a subject of intense internal debate in the Congress and is unlikely to be resolved in a hurry.

Like her other counterparts, West Bengal chief minister Mamata Banerjee has her hands full overseeing the state government’s efforts to contain the spread of coronavirus. But despite her punishing schedule, Banerjee has taken time out to make a short video film (along with well-known director Arindam Sil) on the pandemic and the steps people should take to keep safe. Given her fascination with the glamorous world of cinema, Banerjee has roped in leading stars of the state’s film industry, including Trinamul Congress MPs Mimi Chakravorty and Nusrat Jahan, to feature in the short documentary video titled, Jhad Theme Jabe Ekdin (The Storm Will End One Day).

Meant to create awareness about how people should deal with Covid-19, the film imparts messages on maintaining social distancing and the need for people to stay indoors and pay special attention to personal hygiene like washing hands. But, more importantly, the film also highlights how the state machinery is pitching in to help ordinary citizens in distress. There is no mention of Mamata Banerjee in the film but she figures prominently in the credits for developing the concept of the documentary and writing the lyrics of the title song.

Known to be a low-key person, Union agriculture minister Narendra Singh Tomar, has suddenly become extremely active on social media and has also been making special efforts to reach out to party workers in spite of the current lockdown. Tomar was in the running for the post of Madhya Pradesh chief minister when the Kamal Nath government was toppled recently by the Bharatiya Janata Party but was beaten to it by Shivraj Singh Chouhan. Apparently, he failed to make it because unlike Chouhan, he is not reputed to be very social or accessible. Tomar is, therefore, working on an image makeover as he believes he still has a chance to occupy the chief minister’s kursi. The BJP grapevine is abuzz with chatter that  Chouhan may not last long in his current job.

Mayawati, Akhilesh on the same page?

Ever since they parted ways after their disastrous performance in last year’s Lok Sabha election, Bahujan Samaj Party chief Mayawati and Samajwadi Party president Akhilesh Singh have not been on the same page. But they recently created a buzz in Uttar Pradesh’s political circles when the two leaders tweeted along similar lines. Both leaders condemned the attack on a Dalit tehsildar in Kannauj by BJP MP Subrat Pathak and demanded strict action against the lawmaker. It is possible that Mayawati took up this issue because a dalit was involved and Akhilesh Yadav felt compelled to comment because Kannauj is his family’s fiefdom. But political pundits are not convinced that this is a coincidence and instead view it as a sign of a possible realignment of political forces.

Shoaib Iqbal, six-term Delhi legislator from Matia Mahal, who has switched various political parties during his 27-year career, joined the Aam Aadmi Party before the Delhi Assembly election. But two months after he won on the AAP ticket, Iqbal has started attacking his new party, especially the Arvind Kejriwal government’s handling of the coronavirus pandemic. An angry Iqbal has gone on record to criticise the state government for not making adequate arrangements in his constituency Matia Mahal, which has been barricaded after it was included in the list of hotspots. Iqbal has been heard accusing the chief minister’s office of turning a deaf ear to the pleas of the Matia Mahal residents and complaining that even he could not get in touch with Kejriwal or his officers who have virtually disappeared.

“I am ashamed to call myself an MLA,” bemoaned an anguished Iqbal, who is unable to step out to help his fellow residents. However, the Delhi legislator has no option but to put up with the party’s so-called indifference as the AAP has just begun its second term.