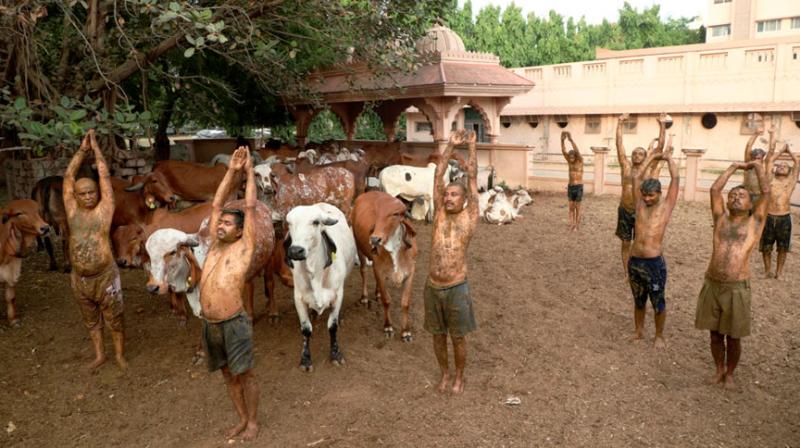 People perform Suryanamaskar after applying cow dung on their body during cow dung therapy, believing it will boost immunity to fight against the coronavirus disease. (PTI)

Death has a familiar face. Each one of us knows someone who has died of Covid-19 and someone whose life has been gutted. There is fear. There is uncertainty as we grapple with a ferocious second wave. India’s coronavirus tally has crossed 25 million. More than 2,87,122 are dead.

But this has not led to a push for pro-science politics that prioritises evidence-based medicine in these troubled times. Quite the opposite, in fact.

In Meerut, a politician from the ruling BJP has been walking down the streets, blowing a conch shell, and performing a “havan” which he claims will stop the spread of the virus. Behind him, there are people and a bicycle cart with a heap of combustible material, and billowing clouds of smoke. Gopal Das Sharma, the politician, is not one who shirks the TV camera. Between blowing conch shells and rallying the faithful, he found time to tell one news channel: “We have mixed ‘havan’ material with cow dung cakes and ghee of desi cow, stems of the mango tree, camphor, etc. to stop the spread of the corona, purification of the environment, increase the oxygen level in the atmosphere and kill the dangerous virus from the atmosphere.”

Pragya Singh Thakur, another BJP politician who represents Bhopal in Parliament, has been telling people to consume gau mutra (cow urine) of a desi (Indian) cow to fight lung infections, and plant trees like peepal and tulsi to prevent oxygen shortage.

These are only two of the most recent illustrations of anti-science. Who can forget the Coronil fiasco?

Many of us are tempted to view all this as fodder for mirth and merriment in these bleak times. But it’s no longer that funny.

Kishorechandra Wangkhem, a journalist from Imphal, Manipur, was recently booked under the stringent National Security Act for a comment on the social media. Wangchem, media reports said, wrote “cow dung and cow urine did not work” in the wake of the death of a local BJP leader who succumbed to Covid-19.

India’s scientific community has been worried about anti-science politics for some time now, but it’s also important to recognise that statements which strike many of us as ludicrous and outright dangerous in the time of a pandemic resonate among a sizeable section of the Indian public.

These sentiments and views are not totally novel.

What is new is their growing social acceptability. That is, in part, linked to the kind of politics on the rise across the country. Earlier, what was not said so brazenly in public can be said now, with scant consequences.

What is happening in India is part of a global trend. Experts have noted that the rise of populism and the emergence of anti-science politics are occurring simultaneously in many places, raising questions about their possible connection.

Many analysts see this as a natural fallout of the populists’ dislike for science because science is meant to be evidence-based, objective and demands proof of statements, and it clashes with populist politics which relies greatly on emotion and fears that resonate with a lot of people.

“Anti-science has emerged as a dominant and highly lethal force, and one that threatens global security, as much as do terrorism and nuclear proliferation,” wrote Peter Hotez, in a recent Scientific American article.  Hotez, a vaccine scientist at the National School of Tropical Medicine at Baylor College of Medicine in Houston, is the author of Preventing the Next Pandemic: Vaccine Diplomacy in a Time of Anti-Science. “We must mount a counteroffensive and build new infrastructure to combat anti-science, just as we have for these other more widely recognised and established threats,” he said.

How exactly does one do that? Do scientists need to ask themselves if they can do a better job of communicating the need for rational thought in places where large numbers of people do not have a scientific temper nor a political leadership which encourages it?

“Not all scientists feel that scientists should engage in science communication, make time and effort to do so… They (scientists) need to promote rationalism and engage with their local communities. Globally, a big problem in science is obscure metrics which have no meaning, are easy-to-game and are used to evaluate scientists — number of research papers, number of citations, number of patents, etc. This needs to change. The current principal scientific adviser has started talking about science communication but hardcore investments are required.”

A pandemic is a new, unfamiliar phenomenon for most people. “This means that people are scared automatically. A lot of people are ready to try new things and believe new things, which they probably ordinarily won’t. A lot of opportunistic people use this -- to earn money, to promote below-mediocre science as solutions. The government needs a very active communication plan which works to fight misinformation. The majority in India is still not on the Internet… and for the Government of India, posting things on the social media is not enough …One needs to engage with communities.” says Dr Bhaumik. Science communication, he says, should be done in regional languages for greater relevance.

Which brings one back to the question — what does one do if the political leadership itself chooses to overlook public statements which are blatantly anti-science? And how does one advocate for rational thought in a society where faith holds the trump card?

There is no short and easy answer. But one must continue to call out pseudo-science, and one must do that in a language and idiom that is accessible to most people in this country.

Perhaps India’s successful fight against polio offers a lesson. It was not just the vaccine that did it. It was consistent communication with communities and engagement with a wide array of influencers. This included religious leaders.

During the battle against polio, vaccine resistance had varied from the overt to the covert in several districts. I remember several conversations with polio vaccine-refusers. Many were from marginalised communities who had never really had access to other basic services, such as clean water. They were wary of the vaccine and were easily manipulated into believing absurd conspiracy theories.

However, eventually, even the vaccine refusers became acceptors. The change came about through sustained efforts which mostly focused on communities. We need to remember that.