Amid a changing world, can Brics find new role?

A British economist had coined the acronym “Bric” in 2001, identifying four high-growth economies that could dominate the world by 2050. 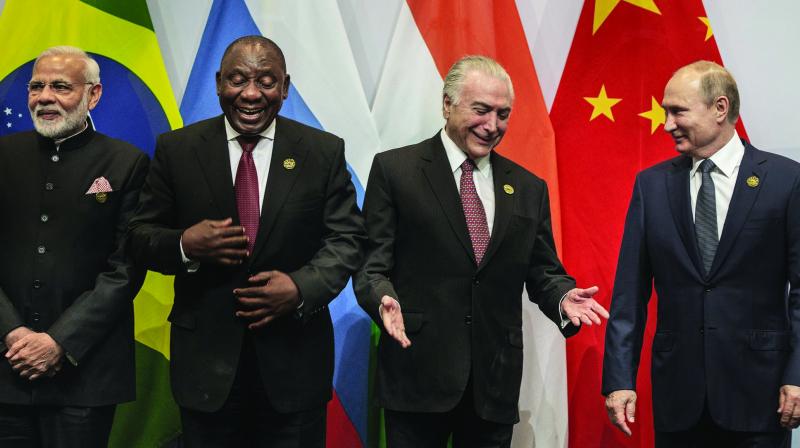 The Bric partnership gave Russia an alternative to its worsening ties with Nato over the Western alliance’s eastward advance towards its borders. (Photo: AP)

A British economist had coined the acronym “Bric” in 2001, identifying four high-growth economies that could dominate the world by 2050. The idea of forming a group, to translate this economic potential into political influence, came from Russia’s President Vladimir Putin in 2007. Russia hosted a Bric foreign ministers’ meeting in 2008 and the first Bric summit in 2009.

The Bric partnership gave Russia an alternative to its worsening ties with Nato over the Western alliance’s eastward advance towards its borders. An economically resurgent China appreciated a platform to demand the democratisation of global economic governance, from which it had much to gain. India welcomed a vehicle to promote multi-polarity in global decision-making. The induction of Brazil provided comfort that Bric would not be drawn into a Russia-China confrontation with the West. This construct also tied in with Brazil’s ambition for expanding its global footprint.

By 2012, a self-perception of its global influence encouraged “Brics” (South Africa joined it in 2011) to pronounce views on every major global development. Its 2013 declaration envisaged a coordination mechanism on key global political and economic issues. In a flight of hyperbole, the 2015 declaration described Brics as a “strategic partnership”. This exaggerated notion was undermined by developments such as the acrimonious standoff between Russia and the United States, intensifying the Russia-China partnership, China’s assertiveness in India’s near and extended neighbourhood, the India-US partnership in the Indo-Pacific and a new Brazilian government with a different worldview from that of his predecessors. China’s growing economic clout in Brics also influences its dynamics: its GDP is more than double, and its foreign exchange reserves nearly triple, those of the other countries combined.

These realities are reflected in the Brics summit declarations. The Brasilia declaration notes shared perceptions on global economic and financial governance. The primacy of the UN, commitment to an equitable multipolar world order, strengthening multilateralism, respecting sovereignty and non-intervention in internal affairs of states are staple Brics tenets, though their interpretation by each country depends on its national interest in specific circumstances. The same goes for Brics’ support for the UN Agenda for Sustainable Development and the Paris Agreement on Climate Change.

The Chinese “all-weather” support for Pakistan precludes references to cross-border terrorism or Pakistan’s role in terror sponsorship. Hence, the Brasilia declaration (like its predecessors) has boilerplate text, condemning terrorism “in all its forms and manifestations” and exhorting countries to prevent terror financing. The absence of substantive content is compensated by new dialogue mechanisms: the Brics counter-terrorism working group constituted five sub-groups on various aspects of counter-terrorism. India is to chair one of them.

The Chinese views are also the main obstacle to Brics support for India’s permanent membership of the United Nations Security Council. Brazil is also an aspirant. South Africa’s candidature needs endorsement by the African Union. As in earlier years, the leaders merely reaffirmed Chinese and Russian support for the aspirations of Brazil, India and South Africa “to play a greater role in the UN”.

The Brics leaders supported the UN-led efforts for a Syrian political process, acknowledging the contribution of the “Astana guarantors” (Russia, Turkey and Iran) and calling for urgent humanitarian aid to all Syrians, as distinct from the US opposition to aid for areas under Syrian government control. The leaders called for a peaceful resolution of the conflicts in Yemen and Libya, an “Afghan-owned and Afghan-led” reconciliation process in Afghanistan, denuclearisation of the Korean peninsula and a two-state solution of the Israel-Palestine impasse, though the actions of some deviate from these precepts. The current US consultations on Afghanistan with Russia, China and Pakistan are neither an “Afghan-owned” nor “Afghan-led” process. The formulation on Israel-Palestine does not mention the status of Jerusalem: the new Brazilian government supports the US endorsement of Israel’s claim on it. Another victim of the Brics consensus is the 2015 international nuclear deal with Iran (JCPOA). Brics supported JCPOA even after the US withdrawal from it. Brazil’s support for the US position meant the absence of JCPOA from the Brasilia declaration.

Over the years, Brics has established an elaborate dialogue architecture. The Brasilia declaration lists 116 meetings, conferences and other events in 2019, at ministerial, official, technical, business, judicial, legislative and people-to-people levels. Though this proliferation may have been motivated mainly by the desire to rack up numbers, it does seem to have generated some mutually beneficial cooperation. Among the promising ones are platforms for agriculture research and energy research cooperation, partnership in elements of the New Industrial Revolution, and collaborative research on tuberculosis.

Intra-Brics trade is regularly discussed in meetings at ministerial, official and technical levels. A Brics Business Council, established in 2013, has made recommendations on trade in national currencies, visa liberalisation and standards harmonization, but with limited success. A Women’s Business Alliance was launched at Brasilia, to bring a new perspective on business issues.

The New Development Bank (NDB) is Brics’ most tangible achievement. It finances infrastructure projects, setting priorities and lending guidelines as per the countries’ requirements. Every Brics country contributes equally to its capital of $50 billion (to be increased to $100 billion) and has equal voting rights. This sets the bank apart from other international financial institutions. In about three years, NDB has approved projects with a total value of $12.5 billion, considerably higher than the portfolio of the better-resourced China-led Asian Infrastructure Investment Bank, established at around the same time. NDB is now considering new members, within the condition of its founding agreement that Brics capital in the bank shall not fall below 55 per cent.

Expectations of an international organisation should be pegged to objective realities. The geographical, political and economic diversity of Brics determines the limits of its cohesion. Its leaders have shown the pragmatism to stress convergences and downplay divergences. Shared multilateral interests temper inimical behaviour in bilateral relations. Mutually beneficial intra-Brics cooperation is a useful cementing factor. In its decade of existence, Brics has found new ways to sustain its relevance for its members.