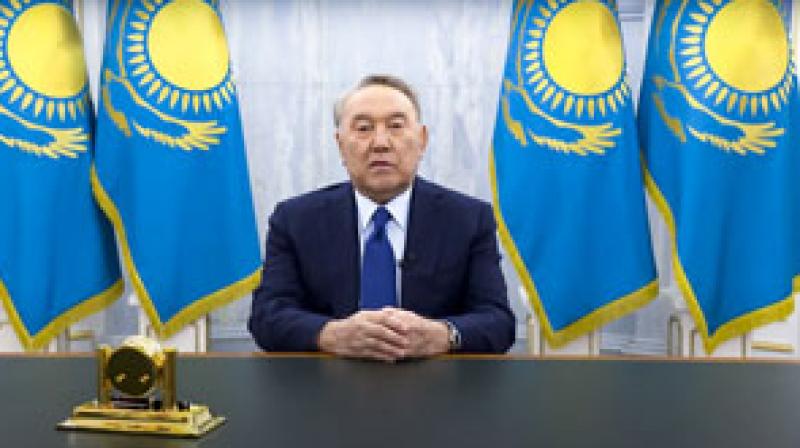 The First President of the Republic of Kazakhstan, Nursultan Nazarbayev. (AP)

Although Ukraine remains the flashpoint, the upheaval in Kazakhstan is nearer home. The brief Russian intervention has smothered the problem, but not ended it.

I run my eyes with wonder because the turbulence is totally incompatible with the image of serenity etched on my mind. The Tien Shan mountains brooding over the endless steppes, the world’s biggest: in this panorama, a solitary horseman followed by a sheep dog, travelling to heaven knows where.

A television crew of three — Devlin Bose, Kabir Khan and I — drove in an eight-seater van through all the republics, with a burly Russian driver at the wheel. Some images were common everywhere. American capitalism had established visibility. In Almaty, like other capitals, the biggest department store, spacious enough to contain a tennis court, had United Colors of Benetton painted above the glass exterior. Inside, a dozen or so young men and women, in designer clothes, walked between galleries of lingerie, dresses, blouses, coats, scarves and fancy shoes — all to be sold in dollars which the Kazakhs didn’t have.

At night our hotel room door was virtually pushed open by the loudest banging a wooden frame can withstand. I called Ambassador Kamalesh Sharma to rescue us from Almaty’s fallen ladies, desperate to find access not so much to us as to our wallets.

This is what the Soviet collapse had done to all post-Soviet economies. The dollar was king. The presence of Benetton in every major city was not an invitation to buy. It was an advertisement for capitalism.

There was considerable propaganda about Central Asia having opened up to Islamic fundamentalism. Our inquiry was revealing. Almaty’s solitary priest, a scrawny young man in shirt sleeves, had a congregation of zero. Kabir found a unique way of gauging how “Islamic” a country was: a vox pop on camera in every city seeking directions to the “mescit”, or mosque. Nobody knew the way to the masjid. In contrast, orthodox churches, which had played a role in bringing down Communism, were packed. After all, 45 per cent of Kazakhs were Russians and 70 years of Communism had altered local cultures.

This was the state of affairs Nursultan Nazarbayev inherited: a Central Asian republic as large as India but with a population of only 18 million. Like his previous boss, Boris Yeltsin, he shuffled out of his Communist coil and, if you will stand for a mixed metaphor, took to authoritarianism like a duck to water. Like Yeltsin’s coterie, Nazarbayev’s family cornered much of the oil wealth. Naturally, people were angry. In 2021, 81-year-old Nazarbayev handpicked Kassym Tokayev as President, retaining top security positions himself. As the riots erupted recently, Nazarbyev’s coterie was seen hand in glove with “foreign” elements seeking Tokayev’s ouster. A “colour revolution” was suspected.

The messy, humiliating American departure from Afghanistan in August 2021 was more debilitating than the Vietnam debacle. In 1975, the US had enough spunk left to let Ronald Reagan to mount a counterpunch in the 1980s, which shook the USSR. Leaving Afghanistan was a bigger disaster because it put an imprimatur on the American decline.

Nazarbayev saw the full gamut: America’s sole superpower moment, a phase of over-reach and decline, reaching its nadir in Afghanistan. Consistent with regional realities, Kazakhstan deftly navigated between the US, Russia and China.

This strategic state kept altering its distance from three powerful nations according to the waxing or waning of power in the neighbourhood. With the US on a slope, China, Russia became the new rising powers.

After the Afghan fiasco, was the US going to pick up its marbles in the region and walk away? Was 20 years of Afghan occupation, clandestine biological research programmes, scores of sleeper cells — all going to be abandoned? Not quite.
How to look muscular in foreign affairs, after being so weakened from within? The “wise men” like Henry Kissinger, Zbigniew Brzezinski and a host of others whispered the mantra to the White House: a weak US must focus on keeping China and Russia distant from one another.

Quite the opposite has happened. Russia and China have seldom been closer. When the state department criticised Kazakh President Kassym-Jomart Tokayev for inviting the Russia led Collective Security Treaty Organisation to send 2,500 peacekeeping troops, Xi Jinping made a most uncharacteristic statement supporting Mr Tokayev’s move. US diplomats were embarrassed. As the violence erupted, Tokayev relieved Nazarbayev of his post. The former strongman’s coterie had given the violent demonstrations a helping hand. The CIA was accused of plotting a “colour revolution”.

Not only was the US caught with its hand in the till of biological weapons manufacture, they are flat-footed over regime change allegations.

Secretary of state Antony Blinken must be red-faced after being socked on the jaw by the Russian foreign ministry. Without an inkling of what Russian intentions were when 2,500 CSTO peacekeepers were rushed to Kazakhstan, he put his foot in his mouth: “One lesson of recent history is that once Russians are in your house, it’s sometimes very difficult to get them to leave.” He just looked silly when Russian troops began to leave after restoring order. But the Russian foreign office was merciless in its parody on Mr Blinken’s statement.

“When Americans are in your house, it can become difficult to stay alive, and not be robbed or raped. Indians of the North American continent, Koreans, Vietnamese, Iraqis, Panamanians, Yugoslavs, Libyans, Syrians and other unfortunate people who are unlucky enough to see these uninvited guests in their ‘homes’ will have much to say about this.”