As the year turned, however, it became evident that the local terrorists who had stayed under the radar began to find their stride 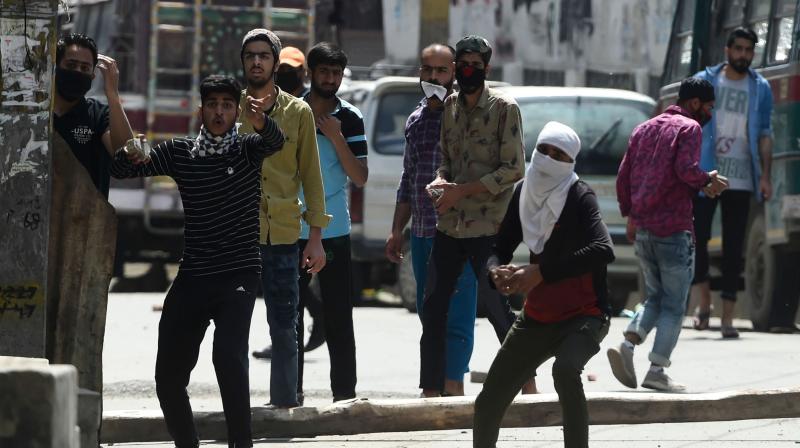 We will do well to recall that the fundamental reason cited in August 2019 for dissolving the state of Jammu and Kashmir -- whose maharaja acceded to India on terms that explicated a clearly enunciated autonomy -- was that the existence of this  autonomy engendered a “separatist” mindset in the Valley.

That false premise produced the false corollary that forcibly ending that autonomy would show who was boss and pave the way for a real integration of the state with India (as though that had not happened), specifically its main Muslim part, the Kashmir Valley.

Nearly one year on, pretty much every passing day has revealed events, incidents and processes which suggest that the misplaced hope of the Hindutva forces was up against circumstances that presage the blowing of an ill wind across the Vale of Kashmir, making many worry deeply.

The first three months after D-Day saw a kind of peaceful people’s curfew, with shops and markets kept voluntarily shut after the initial closure forced by the authorities. The government begged students to return to schools and colleges. They didn’t. Men of the security forces guarded nearly every inch of the Valley from the north to the south, a distance of more than 100 km, standing barely a hundred metres apart, automatic weapons at the ready, as this writer was witness.

It was a sight to shame even a military state. The shock was all the greater because a considerable period before August 5 had been pretty tranquil on the whole, but now it was the government that had decided to turn insurgent -- in matters of the Constitution.

The population was resentful and sullen, but unable to sustain its voluntary curfew. The government-induced harsh physical restrictions and communications lockdown had put paid to the tourist economy and the apple trade, the mainstay of life in Kashmir. For sheer survival, low-level trade and a modicum of normal life had to resume.

The government mistook this for the people of Kashmir accepting the new hand fate had dealt them. European ambassadors were flown in for guided tours, though few were duped. That human rights and human values were under lock and key could not remain hidden for long. Even so, the equanimity of either Parliament or the Supreme Court was not permitted to be disturbed.
As the year turned, however, it became evident that the local terrorists who had stayed under the radar -- difficult to trace due to the communications lockdown, ironically enough -- began to find their stride. The southern part of the Valley, which had been generally unquiet since the killing of a Hizbul Mujahideen commander in July 2016, began to keep the security forces on their toes. But worse followed as north Kashmir too began to erupt. The Line of Control came alive, with cross-border firings and infiltration attempts becoming a near-daily norm once again.

The data does not look good. This year has seen the killing of around 75 terrorists, and nearly 30 securitymen, besides civilians. This is an extremely adverse kill ratio for the forces, comparable with the worst phases in the story of the militancy. Forcing the state to become an Union territory was to be the solution to the problem of separatism, extremism and terrorism, but now the birds were coming home to roost.

A state has been reduced to a UT, which means direct rule from New Delhi. But the point being missed by the arrogant power-wielders is this -- even if J&K had been attached to the Bhavnagar municipality in faraway Gujarat, the point of origin of Prime Minister Narendra Modi and his rough and ready hubris-filled home minister Amit Shah, the history, geography, culture and politics of J&K cannot be wished away. Real problems need real solutions. The force of arms can be a shield only when the people are with those wielding that force. Today, the opposite can safely be asserted to be the case.

Major encounters, claiming the lives of senior Army officers, have taken place in north Kashmir in recent weeks as the militancy has risen in tempo. Even as this article was being written, a fierce overnight military action was on in the heart of Srinagar.

To show that the rules of the game were now different, thousands of ordinary people from all walks of life were placed under arrest when the state was made a UT. Even nine or 10-year-olds were detained. The media was under clamps, made to disseminate mainly government announcements. Politicians were in jail. There was no representative government. The brass hats alone mattered.

When the Internet was restored after many months, only slow-speed Internet was permitted, corroding the template of educational and medical services, and business and trade, besides undermining employment opportunities -- constituting a human rights crisis, overall.

The Supreme Court has recently ruled, in effect, that it has no quarrel with such a state of affairs.

Such is the sum of circumstances that a state of clinical depression on a wide scale in the Valley is being spoken of. With armed security barriers obstructing movement even on rural roads and minor byways, supposedly to check general movement to deal with Covid-19, locals complain of the mounting of a new culture of surveillance.

It is idle to pretend that the totality of the situation since the reduction in J&K’s constitutional status, and the slow process of violence being done to human rights and human dignity, has no bearing on invigorating the militancy. Even in the Hindu-majority Jammu region, the scuttling of J&K’s special status and the benefits that went it are now being widely recognised and resented.

Election fraud in the late 1980s had led to the rise of the first militancy, triggered by a section of angry youth but assiduously planned and exploited by Pakistan. Now, however, we could be on the cusp of change in narrative as the middle ground has capsized since J&K was made a UT. The constituency in Kashmir that had placed its faith in the rule of law, in our claim to secular values, and in our national institutions such as the top judiciary, stands disillusioned. The brewing of a storm is feared, and its epicentre is likely to be local this time around. Greater repression won’t be the answer.