Opinion   Columnists  22 May 2020  Kamal Davar: A glimmer of hope in Kabul
Opinion, Columnists

Kamal Davar: A glimmer of hope in Kabul

With Afghan President Ashraf Ghani and his chief rival Abdullah Abdullah having, sunk their differences there is a glimmer of hope 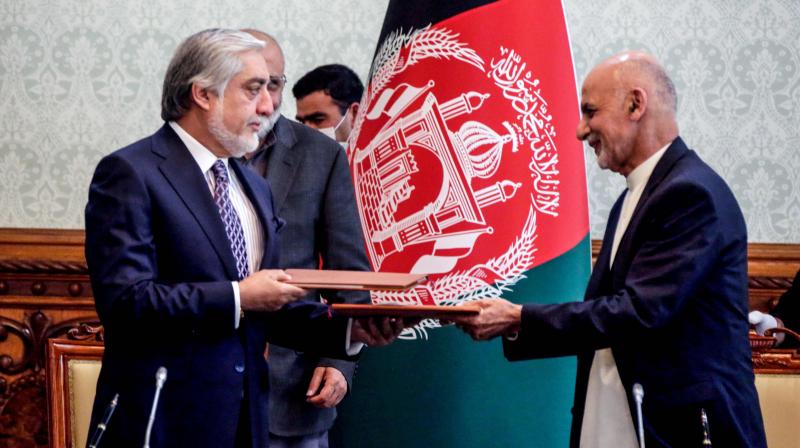 In this handout photograph taken on May 17, 2020 and released by Afghanistan's Office of Chief Executive, Afghan President Ashraf Ghani (R) and his rival Abdullah Abdullah (L) exchange documents after signing a power-sharing deal agreement at the Presidential Palace in Kabul. AFP Photo

In the current century, easily one of the most politically unstable nations afflicted with continuing grave fratricidal violence -- hapless Afghanistan -- appears to have just felt a rare ray of hope. With Afghan President Ashraf Ghani and his chief rival Abdullah Abdullah having, for the moment, sunk their differences to jointly talk with the Taliban rebels, there is a glimmer of hope – of a promising and welcome turn to the rollercoaster ride of violent Afghan politics. This agreement was a result of many months of prodding by middle-of-the-road Afghan political leaders, especially former Afghan President Hamid Karzai.

This fortuitous development in Kabul’s destiny was never considered a real possibility due to the bitter Afghan presidential battle between Mr Ghani and his former CEO Abdullah Abdullah, with both declaring themselves as elected Presidents in September 2019.  This agreement between the two ended the months-long impasse in Kabul and unquestionably presents a glimmer of peace that has been elusive in a country afflicted by fratricidal violence for the past 18 years.

As part of the deal, Mr Abdullah will head the High Council for National Reconciliation which will spearhead the intra-Afghan talks with the Taliban, as brokered earlier by the United States. In addition, Mr Abdullah will also be allowed to nominate his choice of ministers with an equal share in Mr Ghani’s Cabinet, besides an equal number as provincial governors in Afghanistan. Surprisingly, Mr Ghani also allowed his earlier vice-president, notorious Uzbek strongman Abdul Rashid Dostum, who switched loyalties to Mr Abdullah, to be promoted to the rank of marshal in the Afghan National Army. Mr Dostum carries some court charges against him for the murder of his political rival, Ahmad Ischi, in 2016. Mr Dostum’s elevation shows that in politics nothing is impossible, nor is anyone an untouchable in the pursuit of power.

The settling of differences between erstwhile rivals Ashraf Ghani and Abdullah Abdullah has been welcomed by both the US and India. The Americans, after being committed to the “longest war” in their history, with no suitable endgame in view, have been by all standards militarily fatigued and financially weary. Even former US President Barack Obama tried hard for a dignified Afghan exit strategy, but failed. President Donald Trump, from day one of his presidency, had made exiting Afghanistan a cardinal point of his foreign policy. This strategy continues and now is a major plank of his 2020 presidential campaign, so Mr Trump will redouble his efforts for the withdrawal of US troops from that troubled nation. The Americans had no qualms about negotiating with the fundamentalist Taliban, with their medieval mindsets, for the past three years. That they even sought the help of a terror-driven Pakistan to get the latter’s protégés, the Taliban, to begin talks with the US for a peace settlement shows America’s anxiety for an exit from Afghanistan. But it still won’t be easy for the US to leave Afghanistan till some sustainable settlement is reached between the Taliban and the Ghani government. Any hasty US exit will not only diminish the prestige of the world’s sole superpower, but also push Kabul into the throes of a likely civil war.

A major cause of concern for the Indian security establishment is the visible rise of an extremely toxic terrorist outfit, Islamic State-Khorasan (IS-K), in Afghanistan. Though the Afghan Taliban and IS(K) are daggers drawn with each other, yet the latter too derives support from Pakistan and its sinister Inter-Services Intelligence. The ISI(K) was in the news recently when it attacked a maternity home in Kabul, murdering many pregnant women, newborn infants and nursing staff. Unlike Taliban, the IS(K) is vociferous  about its territorial ambitions in South Asia, including Kashmir.

India is much respected in Afghanistan not only for its civilisational links but also its consistent policy of non-interference in Kabul’s internal affairs. Its $3 billion aid package and assistance in infrastructural, educational, medical and welfare projects in the last 15 years stands out as a shining example of India’s soft power foray. The fact that India has been generally ignored in high-level parleys on Afghanistan’s future, even by the US, its “strategic partner”, holds a lesson or two for Indian diplomacy – that it should be strong and autonomous enough to chart its own course. The US, grudgingly, appears to have changed tack somewhat for the last few months and its Afghan special envoy Zalmay Khalilzad has made quite a few trips to New Delhi. He has been vocal in suggesting that India should talk directly to the Taliban.

India, as a traditional supporter of Afghanistan for decades, needs to step up its all-round support, including strengthening the Afghan National Army and its security forces, without of course putting its boots on the ground. It must wholeheartedly support the Ghani-Abdullah deal and also open up channels of communication with all moderate sections of Afghan political society. India should play its part in the “Great Game” in the Hindu Kush prudently and proactively and try to get Russia and Iran on board to build a regional consensus on Afghanistan’s future. Kabul’s destiny in the years ahead must remain a significant challenge for India’s foreign policy.