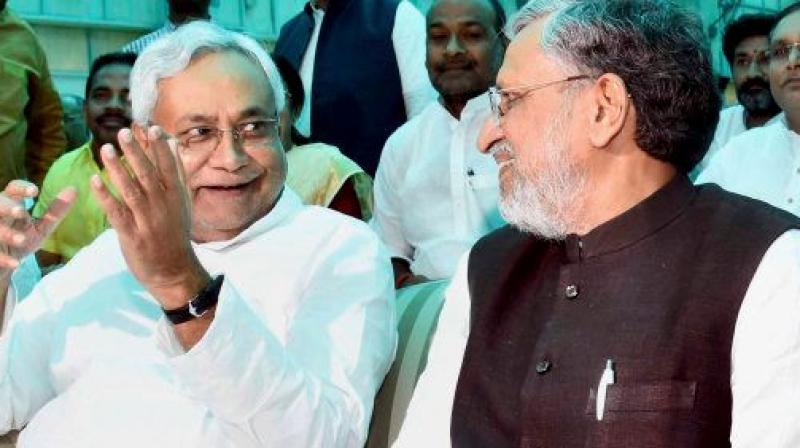 All is not well in Bihar’s JD(U)-BJP coalition. The Lok Janshakti Party has conveyed to its central leadership its reservation about the BJP’s Bihar in-charge, Bhupender Yadav.

The party complained that both Yadav and deputy chief minister Sushil Modi are biased towards chief minister Nitish Kumar, and they work in favour of the JD(U). The LJP’s discomfort is growing with the expected return of former CM Jitan Ram Manjhi back to the NDA fold.

Bringing Mr Manjhi back was Nitish Kumar’s calculated move to squeeze the LJP out, as Chirag Paswan has been behaving more like an Opposition leader than an alliance partner.

The Bihar poll dates have not been announced but Nitish Kumar and the BJP have unleashed a “demolish Mahagathbandan” campaign. Every day, someone or the other deserts the RJD or the alliance.

The Congress is also under pressure from its upper-caste lobby to stay away from the RJD’s Tejaswi Yadav but Rahul Gandhi is said to be keen to stay on in the Mahagathbandan.

The sudden shifting of Union home minister Amit Shah from Medanta hospital to Delhi’s AIIMS led to a bout of concern in the corridors of power. Thankfully there was nothing serious or problematic.

Shah’s wife travelled from Ahmedabad to Delhi to look after her husband who is said to having issue with steroid-based medicines. At AIIMS, the home minister has been given a VVIP room reserved for the Prime Minister, President etc.

Last heard, a heavy load of government work was done from the hospital as the minister has been Covid-19 negative.

It’s panic time in the Congress, too. News of a Congress Working Committee over the weekend turned out to be a false alarm. Those responsible for arranging the video calls were not even alerted when a section of the media announced its date and time.

The CWC has the crucial agenda to attend to, which basically amounts to passing the baton of leadership from Sonia Gandhi to Rahul. The seemingly smooth transition has now developed hiccups.

The old guard of the party wants Rahul to recognise and establish a functional hierarchy in the CWC and the AICC secretariat. Some want the revival of the Congress Parliamentary Board, which has not functioned since May 1991.

The younger lot wants sweeping changes in the organisation. Problem is neither Rahul nor Sonia have authorised anyone to look into these issues.

Patriarch Pawar’s patronage to Rohit, a challenger to Parth, is said to have upset Ajit. A photograph of Ajit dada sitting in his enclosed chamber with gloves and mask, and his cousin Supriya Sule sitting more than a normal social distance away, is doing the rounds.

In the photograph, Sule is surrounded by others while Ajit Pawar is seen as treating her just as any other person.

Rajasthan governor Kalraj Mishra has a coffee-table book on himself. It has been sent to all who matter in Lutyens’ Delhi. The governor’s office has reportedly been calling up recipients seeking their response and feedback.

Those praising Mishra’s ancestry and his past political achievements, have gently been encouraged to send an email or put their appreciation in words. Perhaps a second edition of the coffee table book is on the cards.

Or is the Rajasthan governor looking for a career outside of Jaipur's Raj Bhawan ahead of the 2022 vice-presidential nomination?