Interestingly, neither the Gandhis’ camp nor the dissidents have any clear idea of how to oppose the BJP 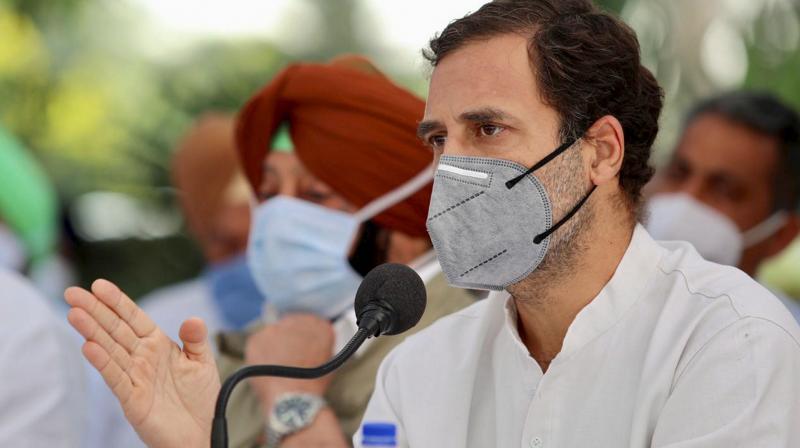 The faction-ridden, intrigues-infested Congress Party, even in its decrepit state, remains more interesting for political observer than the regimented Bharatiya Janata Party, with the monotonous hectoring of Prime Minister Narendra Modi and the few chosen leaders who are licensed to speak. There are more voices inside the Congress despite the dominance of the Nehru-Gandhis, with its camp followers in tow. The meeting convened by party president Sonia Gandhi, which included Rahul Gandhi and Priyanka Gandhi Vadra and the 23 “dissenters” who dared to raise doubts about the party’s leadership held on Saturday seems to have been a cloak and dagger affair.

The Gandhis seem to have said that the party was “like a family” and that they should all work together, and the family loyalists intoned that Rahul Gandhi was the right man to become party president once again because he enjoys enormous support in the organisation. The dissidents wanted a decision on the issue of who will lead the party and how, and Rahul Gandhi deflected the question, saying that the meeting was not convened to discuss who will be president but to strengthen the party. He had also clarified that he had nothing against the seniors in the party as it was made out. Priyanka Gandhi Vadra said there was a real need to take to the streets and that just submitting memorandums would not suffice. There was an assurance from the Gandhis that the process of organisational elections was on.

The dissidents said that there would be another meeting soon like the one on Saturday -- for brainstorming on the lines of the meetings at Pachmarhi (held in 1998) and Shimla (2003) in the first decade of Sonia Gandhi as president. But there was no official announcement that there would be such a meeting. At the end of the day, there was no clarity on whether peace was made with the dissidents who wrote the letter or whether they have been left high and dry with vague assurances that the Gandhis recognise their importance.

This has always been the way of the Congress, in the party as well as in the days when it was in power, not to face up to problems or to solve them. The issues are left unaddressed. At the most, consultations without outcomes are held. It looks like procrastination is the chosen path of the Congress even now. It might have been the secret of the party’s success in the past, but it does not look like it is effective any longer. An aggressive BJP is not marginalising the Congress as much as the Congress is busy making itself irrelevant.

Interestingly, neither the Gandhis’ camp nor the dissidents have any clear idea of how to oppose the BJP, either on the issue of Hindu communalism or that of managing the economy. Rahul Gandhi has instinctively embraced old-fashioned and discredited secularism, and socialism, which was what was abandoned by Rajiv Gandhi in the 1988 Congress session at the Kamaraj Nagar venue in Chennai. Rahul Gandhi may have his own logic behind his socialist stance. He might say that it was necessary in 1988 to abandon Nehru’s socialism of the 1950s, but it is necessary to go back to some kind of socialism in 2020, with globalisation at the end of its tether. And in a certain sense, Rahul Gandhi might be right -- that the only way to fight the BJP’s Hindu majoritarianism is to stick to one’s secularism stance with conviction. But the critics of Congress, including religious minorities, are not convinced that the Congress is standing up for secularism with enough conviction.

The challenge before the Congress is to sense the political winds as well, which is what it tries to do half-heartedly, and becomes an easy target of both the majority communalists as well as the minority communalists. There is no one in the Congress and in the liberal intelligentsia outside to forge a plank which will win over ordinary Hindus who are religious, and tell them that Hindutva is anti-Hindu, which it is. The new rationale of secularism should be formulated as defending the rights of religious minorities along with the majority’s religious rights. The party is indeed moving in this direction, but there is no one really of any standing to articulate this calibrated stance.

The real crisis in the Congress is that of the party’s second- and third-rung leaders depending on the Gandhis to win elections for them in the way they used to, and to sing praises of the Gandhis as their saviours. The Gandhis are now unable to deliver electoral victories, and this is no fault of Rahul Gandhi. The country has changed, and people are not looking up to charismatic leaders. Of course, the BJP leaders are acting like the Congress when they praise Narendra Modi as the talisman of their party, and that Mr Modi is winning the elections for them. It is of course an illusion, not much different from the Congress’ that the Gandhis are the mascots.

The dissidents are critical of the monopoly of the Gandhis’ followers in the party, who are blocking everyone’s way. But the dissidents also do not have any bright ideas to fashion a political vision for the party and the country. But there is something common that unites the Congress establishment (the Gandhis’ camp holding party positions) and the dissidents. They are not perturbed by electoral defeats. They have played the game of power much longer than anyone else, and they believe that electoral setbacks are seasonal and that it is not necessary to lose sleep over it.

The many people who do not like Congress and its wily ways but who feel that it is a necessary evil to fight the BJP, which is more dangerous because of its authoritarian and totalitarian regime, are agonising over the present dilapidated state of the grand old party. They are forever suggesting solutions to the Congress’ problems, which are given short shrift by the party itself. The Congress isn’t going its mend its ways anytime soon, and its leaders also feel that they do not have to do so.