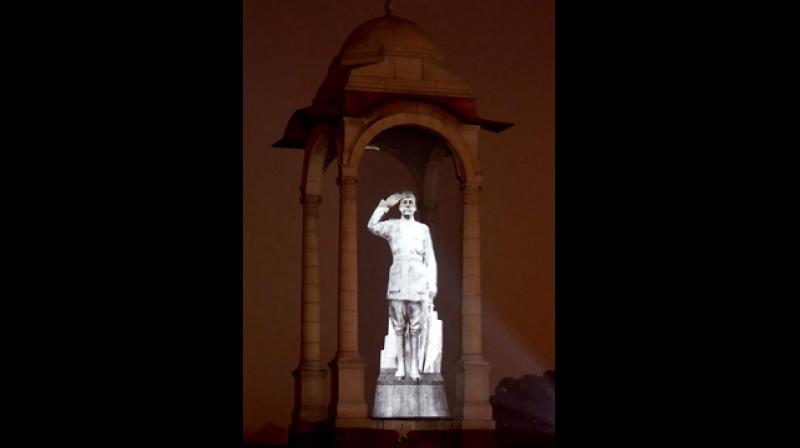 This handout photograph taken on January 23, 2022 and released by the Indian Press Information Bureau (PIB) shows a hologram of the statue of Indian nationalist leader Subhas Chandra Bose that was unveiled by Prime Minister Narendra Modi, in New Delhi. (AFP)

Decades before the Narendra Modi government decided to instal a statue of Subhas Chandra Bose under the colonial canopy at Delhi’s iconic India Gate, there were plans to place Gandhi at the same spot. This proposal led to a robust debate with several architects, academics and conservationists objecting to this space, pointing out that a colonial canopy was an incongruous spot to instal a statue of the Father of the Nation who fought against colonial rule. The late Jagmohan, who had served as Delhi lieutenant governor, was among those who objected to this proposal for this reason. The debate raged on with a section of architects and academics even going to the other extreme, suggesting that the canopy, which had been lying vacant since 1968, served no purpose and should be removed. This suggestion was vetoed. Today, the government has decided to place Bose under the same canopy. Clearly, the powers-that-be did not think this through considering Bose,like Gandhi, was at the forefront of the battle against the British. But surprisingly, unlike the last time, there is no public debate involving a heritage space. It is learned that even the committee set up to draw up programmes to mark Bose’s 125th birth anniversary, was also not told or consulted about this.

After considerable speculation, the Bharatiya Janata Party finally announced that Uttar Pradesh chief minister Yogi Adityanath will contest the upcoming Assembly election from Gorakhpur Urban constituency. Earlier, the BJP leadership thought of fielding Yogi Adityanath from Ayodhya and even leaked this information to the media. However, the party decided to play safe as it got feedback that Ayodhya may not prove lucky for Yogi Adityanath. The constituency is essentially dominated by Brahmins who, as is well known, are not well disposed to Yogi Adityanath as they believe he has been favouring Thakurs, the caste to which the chief minister belongs. Though there was a section in the BJP which felt Yogi Adityanath would make it in Ayodhya, the leadership did not want to take any chances. Besides, the chief minister himself did not wish to shift to another constituency where he would be dependent on the party organisation. On the other hand, Yogi Adityanath has been a five-term MP from Gorakhpur and, as head priest of the Gorakhpur Math, has a band of personal loyal workers to run his campaign.

With 10 prominent OBC leaders leaving its ranks in the run-up to the upcoming Uttar Pradesh Assembly polls, the BJP has every reason to be worried as it was the consolidation of non-Yadav backward classes which had powered the BJP to a massive victory in 2017. The party has been trying to make amends after these leaders charged that the party had systematically disregarded the interests of backward classes over the past five years. As a first step, the BJP deputed its OBC face and deputy chief minister Keshav Prasad Maurya to dissuade the disgruntled leaders from leaving. After this mission failed, the BJP has been desperately sending out the message that it values its backward class leaders and is giving them sufficient prominence. It is no coincidence then that Keshav Prasad Maurya, along with state BJP president Swatantra Dev Singh, has recently been fielded by the party on important occasions. For instance, when Mulayam Singh Yadav’s daughter-in-law Aparna Yadav joined the BJP, Mr Maurya was seated prominently on the podium to welcome her.

Mulayum Singh Yadav’s daughter-in-law Aparna Yadav’s move to the BJP is predictably being celebrated as a major victory by the saffron party. But the truth is that Aparna is no political heavyweight. Aparna’s decision to cross over to the  enemy camp is actually triggered by a family feud. Aparna is married to Prateek Yadav, son of Mulayam Singh Yadav’s second wife Sadhna Gupta who always resented the fact that her stepson Akhilesh Yadav had been anointed as her husband’s political heir. Since her son was not interested in pursuing a career in politics, Sadhna Gupta instead encouraged her daughter-in-law to enter the electoral fray, persuading Mulayum Singh Yadav to give her a ticket from Lucknow in the last election which she lost to Rita Bahuguna Joshi. Aparna’s decision to join the BJP is not surprising as this is her way of getting back at her husband’s family.

Delhi chief minister Arvind Kejriwal’s decision to hold an opinion poll to decide that Bhagwant Mann would be the Aam Aadmi Party’s chief ministerial face in Punjab provided a cue to others in the electoral fray to do the same. For instance, social media has been flooded with similar surveys showing how Punjab chief minister Charanjit Singh Channi has the highest approval ratings while his rivals both in and outside the Congress, whether it is Navjot Singh Sidhu or Mann, are trailing way behind. These surveys or opinion polls are being posted on social media, not by the Congress official Twitter handle, but by unknown persons who are supposedly Channi supporters. These surveys followed a video posted on the Congress official handle virtually projecting Mr Channi as the party’s chief ministerial candidate. Mr Sidhu, who also sees himself as a future chief minister, has yet to respond.