Modi, US & Russia: Is this neo-nonalignment? 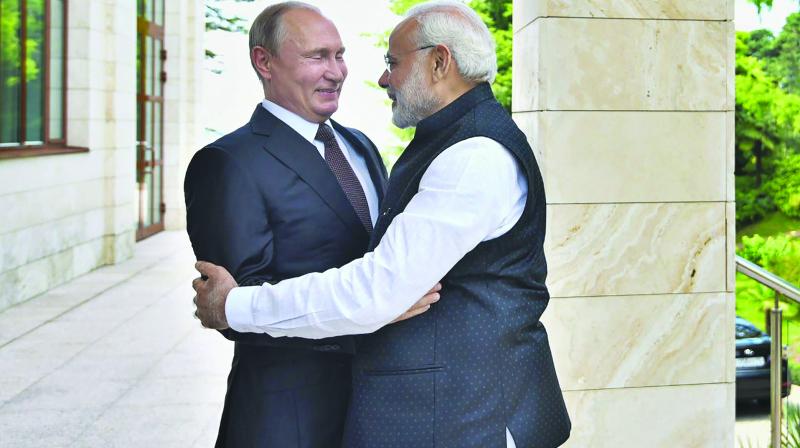 Prime Minister Narendra Modi’s one-day “informal summit” with Russian President Vladimir Putin on Monday came close on the heels of a similarly-ascribed meeting with Chinese President Xi Jinping. This new diplomatic genre is in line with Mr Modi’s desire to adopt the novel, in name or structure. While in both there were short delegation-level meetings or plenaries, the bulk of the interaction was one-on-one.

India’s geopolitical environment has mutated considerably since Donald Trump became America’s President. His much-touted trade sanctions against nations building up surpluses in trade with the US and those targeting US intellectual property finally began early this year as he targeted steel and aluminium imports and sanctioned Chinese corporations breaking US laws on sanctions against Iran and North Korea. With Russia, the additional sanctions and declaration of diplomatic staff as persona non grata was in line with similar action and Britain and some other European allies over the poisoning of a Russian émigré in the UK. This also helped counter the ongoing investigation by special counsel Robert Mueller into the Trump team’s complicity in possible Russian meddling in the 2016 US elections. Mr Trump was desperate to prove that he wasn’t a Russian toady like the fictional compromised US presidential hopeful in The Manchurian Candidate. The US has also subsequently withdrawn from the Joint Comprehensive Plan of Action (JCPOA) — the nuclear deal between Iran and the five permanent members of the UN Security Council (P-5) plus Germany. Separately, he announced a summit with North Korean dictator Kim Jong-un.

Among other critical factors providing the background to Mr Modi visit was Russia’s critical role in finding a solution to the Syrian crisis, from where the US wants Iran to exit. Iran and Pakistan are critical to stabilising Afghanistan; there too Russia has opened channels to all players, including Taliban. Unlike the US less-carrot-more-stick policy, Russia is using its own vast contacts and critical alliances in Central Asia. On the economic side, higher oil prices fills Russian coffers with resources, while the global economy that grew at a record 3.8 per cent in 2017, its fastest since 2011, is starting to level off. In India, the social media is abuzz with old tweets of PM Modi and his colleagues and key fans pillorying his predecessor as oil prices escalated to over $100 a barrel for not cutting duties to cushion the public impact.

The impact of all this, in the government’s last year, and more so after failing to come to power in Karnataka, is a lessening of jingoism and a gradual return to realism with neighbours and old allies like Russia. PM Modi, after much theatrics and meandering, is realising that his predecessors were not naïve when they didn’t put all eggs in one basket. Multipolarity is more than the serial hugging of leaders of all continents. It’s a framework to allow India freedom of manoeuvre and independence of decision-making. While Europe and even Britain stoutly defended the Iran deal, India came out with an anodyne statement when the US walked out. Unnoticed in India is the Iraqi election result, where Moqtada al Sadr, after abandoning old ally Iran, led his group to win the most seats. But Prime Minister Haider al-Abadi holds the balance, like the JD(S) in Karnataka, to go with nationalistic and Iran-defying Moqtada or some Iran-supported parties, including one that represents Shia militias which ousted ISIS. India has kept some distance, preferring to stick to the US-Israel-Saudi-Emirati corner. Russia would have analysed and ingested this policy choice.

Thus, when the hugs began in Sochi, both sides had studied the other’s policy preferences. Mr Putin was in a stronger position than when Mr Modi would have met him last. The convergence of interests operates at two levels. One is strategic, the other is the bilateral context, where the subjects are familiar. The most visible is always defence purchases and cooperation. Moscow’s perception of late is that India is reducing the salience of Russian sales as the US, which helped extricate India from the burden of technology denial regimes, gains an edge. France was always a balancer, thus not a new factor. Sukhois now form the core of the Indian Air Force, but India’s experience in joint production of a fifth-generation fighter has been unhappy due to cost overruns, production delays and the absence of technology-sharing. On the naval side, only Russia has given access to nuclear-powered submarines, which enabled India to develop indigenous capability to produce nuclear reactors and submarines powered by them. Russian help in missile capability also can’t be ignored, and it remains to be seen if the purchase of the S-400 missile system has been cleared, which would be a huge boost to our air defence.

Energy also sees close cooperation. While India has invested in Russian upstream assets, Rosneft picking up debt-hobbled Essar Oil is a major FDI in India. There’s talk of joint exploration in the Arctic Circle, but this may be just hope. Civil nuclear energy cooperation has always been a major success.

Russia feared the Nuclear Suppliers Group’s waiver to India might level the playing field and increase competition, but so far only Kudankulam has been expanding, and the proposed European and US projects are stuck.

The connectivity hype based on the International North-South Transport Corridor needs a reality check. This alternative to the Suez Canal route has serious hurdles, like non-return of containers due to imbalanced trade, excessive financial add-ons by ship-to-truck and back truck-to-ship, train loading and sanctions on Iran again and on Russia. When the US imposed sanctions on Oleg Deripaska, a Russian oligarch whose firm Rusal provides six per cent of global supplies, it disrupted global markets. The question is: is Europe ready to offend Mr Trump if it defied the latest sanctions. Will India likewise, with its pusillanimous approach towards the US, really ignore the sanctions and keep engaging Iran and Russia. The rising oil and gas prices and the need to control inflation, with a general election looming in India, could have been a key motivating factor for the Sochi visit and bearhugs. The need to keep Russia moving more deeply into the China-Pakistan corner is another reason. Perhaps Mr Modi’s neo-nonalignment policy is driven by same imperatives as that of his predecessors. After a long theatrical detour, he’s back to the Indian foreign policy mainstream.