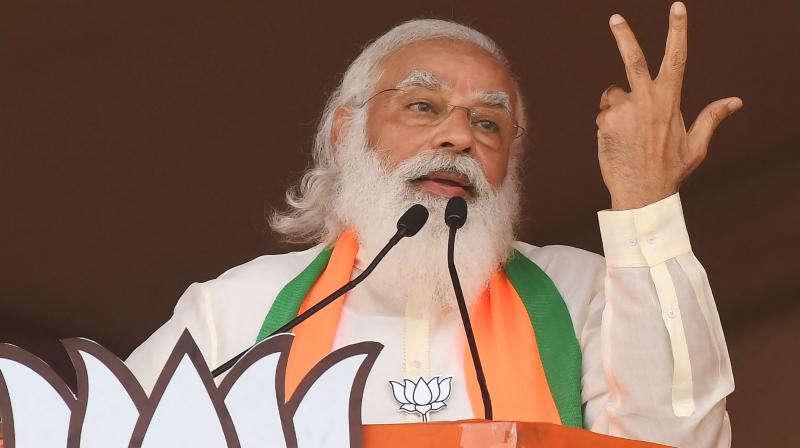 Despite these challenges, Prime Minister Modi continues to be popular with the masses. (Photo: AFP)

The 2014 mandate that catapulted Narendra Modi into the prime ministership of the world’s largest democracy was essentially due to three factors -- Mr Modi’s personal charisma, the united grassroot efforts of the BJP and the Sangh Parivar cadre and the failures of the previous UPA-2 government headed by Dr Manmohan Singh. When the general election took place five years later, in 2019, the third factor was no longer there. Yet, the mandate that Mr Modi secured in the 2019 general election was even bigger than the 2014 mandate.

Mr Modi’s charisma continued to be a factor. Under Amit Shah’s leadership, the party organisation had also grown in strength and expanse. But the most important factor for the favorable mandate in 2019 was the five-year performance track record of the Narendra Modi government. Two qualities that distinguished Mr Modi’s government in its first term were “decisive” and “hands on”. Unlike his predecessors who largely stayed dormant, Mr Modi led from the front. He not only demonstrated courage in taking strong and decisive action, but also clearly showed that he was the boss.

As he began his second term after the landslide in 2019, the decisive and hands-on approach continued. The bill for the abrogation of triple talaq was introduced and passed in July. And in early August came the historic abrogation of Articles 370 and 35A of the Constitution.

Towards the end of the year, another big step was taken by passing the Citizenship Amendment Act (CAA). In November the same year, the Supreme Court had delivered its final verdict on the Ram Janmabhoomi dispute allowing for the construction of a temple at the site under question. Mr Modi did not waste any time in constituting a trust led by people not only dedicated to the cause but also involved in the temple movement for decades.

Speaking on the completion of the first 100 days of his Modi 2.0 government last year, Prime Minister Modi said that development, trust and big changes mark the performance during the period. That people have trusted the Prime Minister massively is beyond dispute.
The country has overwhelmingly supported Mr Modi on all these issues. In the eyes of his core supporters, Mr Modi has acquired the stature of a supreme leader.

However, there are four areas in which the government faces major challenges.

Covid-19 pandemic: At a time when the government was preparing to embark on a major development drive with $5 trillion GDP as the target, the country and the rest of the world were hit by the Covid-19 pandemic. The strict measures like lockdowns together with the Prime Minister’s continuous monitoring and engagement with the masses had helped in India successfully overcoming the deadly impact of the first wave of Covid-19. India also led in the manufacture of vaccines and their supply to many countries.

However, the deadly second wave has caught the country off guard.
One important lesson that the coronavirus crisis has taught was the need for empowering grassroots institutions. The way forward is not hyper-centralisation, but “cooperative federalism”.

Economy: As the government entered the second term, it moved fast on the reforms front. New and broad-based reforms in the agriculture and banking sectors, together with the push to dispense with the public sector bulge, indicate the government’s commitment to further liberalise the economy. The bold push for encouraging market forces to take the lead in the agriculture sector has led to some resistance from a section of farmers. For the long-term benefit of India’s agriculture sector, these reforms are going to be a turning point for the farmers of the country.

At a time when the Indian economy was all set to take off, the pandemic struck, significantly crippling it. The second wave is going to further delay the recovery. However, the determination shown by Modi 2.0 to forge ahead with policies for greater liberalisation can certainly help in the process of economic recovery.

However, Modi 2.0 started with mounting security and foreign policy challenges. While the Narendra Modi government has a strong and stable military security apparatus in place and is able to counter its recalcitrant neighbours like Pakistan and China effectively, its diplomatic endeavours need further sharpening. Indian diplomacy, right from the time of the nation’s first Prime Minister Jawaharlal Nehru, has had two undeclared priority commitments. These are Asian pre-eminence and non-alliance. Indian diplomacy must pursue these twin commitments vigorously. While India’s relations with the United States have improved substantially under Mr Modi’s government, it is imperative for India to pursue a policy of being a frontline state in its Asian neighbourhood.

Perception: The greatest challenge that the Modi 2.0 government faces is the perception challenge. Modi 1.0 saw Mr Modi himself aggressively pushing for a major image makeover for India through various initiatives. His initiatives at the UN, bilateral engagements with senior world leaders, the hosting of Bimstec and the African Leaders Summit have all helped in creating a positive perception about Mr Modi. There was a time when he was projected by many international magazines as an important global statesman.

However, in the last couple of years, the perception-related challenge has certainly become serious for the Indian leadership. Some interest groups like the radical left-liberal cabal, are in the forefront in the campaign of misinformation. The Indian response varied from “who-cares” smugness to innuendo-filled angry outbursts. Neither will help India address this perception challenge. India must step up its efforts to engage with global public and civilian institutions in a more proactive and constructive way in order to be able to address this perception challenge.

Despite these challenges, Prime Minister Modi continues to be popular with the masses primarily because of his direct connect with them and also because they see in him a leader genuinely and selflessly committed to the welfare and well-being of the country. In order to overcome all the challenges that lie ahead, Modi 2.0 needs to put greater focus on decentralism and cooperative federalism domestically and proactive engagement globally.