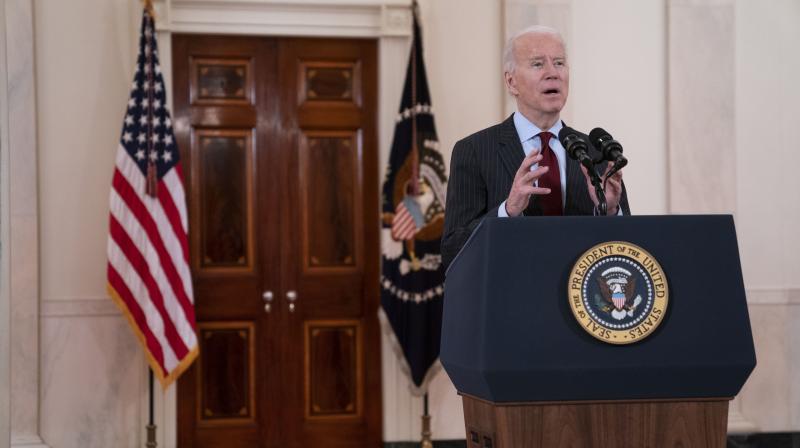 President Biden’s words need closer attention to understand that this is a new America, traumatised by four years of Trumpian undermining of US institutions. (AP /Evan Vucci)

Three events have been shaping India’s geopolitical environment since the Galwan Valley standoff between India and China since May-June last year. One is the trajectory of the Covid-19 pandemic and the pace of vaccination. Two, the ascendance of US President Joe Biden and his swift moves to establish his domestic and international agenda. Finally, the farmers’ agitation against the three agricultural reform laws, passed hurriedly by Parliament without a proper examination by a select committee or a division and vote. Consequently, the normal boundaries between domestic politics and international relations have shattered, as the local and global factors impinge on each other.

A classic case was how a “toolkit” developed for environmental activists to be more effective, tweeted by global youth icon Greta Thunberg, became the locus of the police arrests of Indian activists recommending it to protesting farmers. From there it is being sought to be linked to pro-Khalistan proponents abroad. Almost 100 British parliamentarians threw their weight behind the Indian farmers, whose protest has gradually widened as the lead passed from mainly Punjabi and Sikh farm union leaders to the redoubtable Tikait brothers of western Uttar Pradesh and the family of late Prime Minister Charan Singh. Besides rumblings in the US Congress, the state department urged respect for the protesters’ rights. American farm unions also lent their weight to the Indian protests.

In the brouhaha, not enough attention has been paid to the repeated message from President Joe Biden, as he told the Munich Conference that “we are at an inflection point”. From that assumption, he argues how the US plans to regenerate economically and reassert strategically. The main challenges are climate change, the global pandemic, Chinese assertiveness combined with Russian obduracy, reform of multilateralism and defence of the democratic way of life.

Between President Biden’s Munich address on February 19 and his remarks at the G-7 meeting a day earlier, the most striking was his plea over the role of democracy and rule of law. Critics maintain that historically US actions in this regard have often been differed from America’s words. For decades, during the Cold War, the Americans not only happily worked with autocrats and dictators as allies but overthrew with alacrity democratic governments, for instance in Iran and Chile, if seen as unfriendly to US interests. Therefore, the Indian government has so far ignored subtle hints from the US that freedom of expression includes the freedom to protest peacefully and tweet or support those protests on social media platforms. The spat between the government and Twitter over which handles to block underscored the divergence between the Indian approach and that adopted in the West by and large.

President Biden’s words need closer attention to understand that this is a new America, traumatised by four years of Trumpian undermining of US institutions, including the former President denying his electoral defeat and repeatedly rejecting the orderly transfer of power. That wound is still open as despite the impeachment of Mr Trump having failed, the US Congress is in the process of setting-up a 9/11-type commission of inquiry into the Capital violence and Mr Trump’s role in it.

President Biden’s Munich address began by recommitting America to its trans-Atlantic alliance, which his predecessor had contemptuously shredded. Then he developed at some length his defence of democracy. He argued that the alliance was rooted in the “richness of our shared values”, including the need to protect the rights of all and the rule of law. He warned that in both the US and Europe “democratic progress is under assault”. He added: “We are in the midst of a fundamental debate about the future and direction of our world”. Despite the pandemic and the so-called fourth industrial revolution, he continued, democracy was essential and must prevail. He concluded this part with the telling sentence that “democracy does not happen by accident”, nor is Western liberal democracy a “relic of history”.

The same message emanated from the Australia-India-Japan-US Quad ministerial meeting, held a day before Mr Biden’s Munich address. The statement notes the four nations share values as “political democracies, market economies and pluralistic societies”. They seek a rules-based international order and respect for the territorial integrity of other nations. The second is aimed at both the maritime claims of China in South and East China seas, as indeed resolving Chinese intrusions across the Line of Actual Control in Ladakh. But India too had to accept in exchange the criticism of the military coup in Myanmar by joining the demand for the rule of law and democratic transition.

To assume that the US is just posturing against China and India’s strategic value as a counterweight to China, economically and militarily, would keep any serious criticism of heavy-handed and majoritarian governance of the Indian government in check might be a mistake. Mr Biden has seen power exercised both from the White House as vice-president for eight years and from the Senate, where he chaired the foreign relations committee. Hillary Clinton recounts in her book Hard Choices that she and Mr Biden opposed President Barack Obama cutting Egyptian President Hosni Mubarak loose as the protests developed at Tahrir Square during the Arab Spring. That was Mr Biden as the traditional pragmatist. But the new Biden has emerged triumphant from Donald Trump almost bringing US democracy to its knees. Democracy for him is no longer some asinine prescription for the Third World, used selectively, but a living organism that needs defending if China and Russia have to be countered.

Sources in the BJP say Prime Minister Narendra Modi is unwilling to roll back the farm laws. As chief minister, he apparently browbeat protesting Gujarat farmers over the installation of electricity meters. He is trying to extrapolate that success in dealings with the farmers of Punjab, Haryana and Uttar Pradesh. The BJP’s Haryana government hangs by a thread. The UP Assembly election is just a year away. The Covid-19 pandemic is starting to re-spike as the vaccination pace is slow, with the calls for private sector involvement ignored. As Harold Wilson once said, a week is a long time in politics. Exactly a year ago, a cocky President Donald Trump said before he travelled to India that the US was on top of Covid-19. With him gone and half a million Americans dead, the conclusion is unavoidable that political arrogance can be costly. India may discover just that, caught between Prime Minister Modi’s obduracy, the BJP’s reflexive majoritarianism and President Biden’s evangelistic defence of liberal democracy.