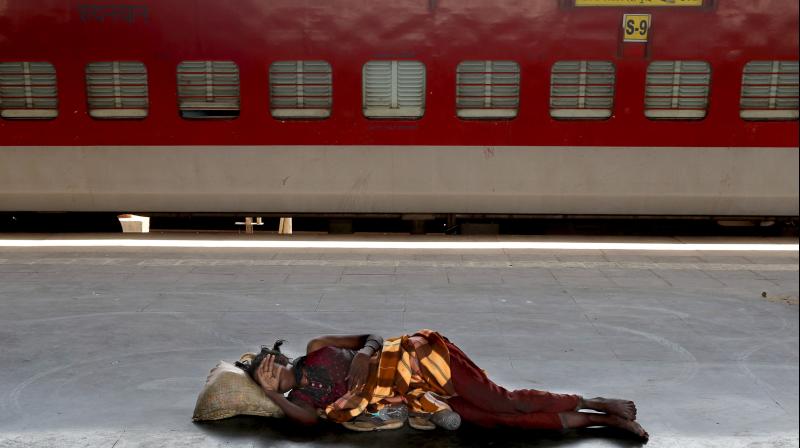 A homeless woman sleeps on a deserted platform of a Lokmanya Tilak train terminus in Mumbai, March 23, 2020. As India expanded its virus-containment measures and halted its lifeblood train network, the federal government warned Monday of strict legal action for those who flout the rules. (AP)

Prime Minister Narendra Modi’s March 19 address on Covid-19 was predictably a politician’s rallying call. Yet, many TV anchors and columnists gushed over the banalities as if they were profundities. By ignoring vital questions like the size of the challenge India faces, details of what the authorities are doing to meet it, and the ultimate cost to the nation, they failed badly in their profession as impartial interlocutors.

This is an opportunity for the government to reveal priorities that demonstrate concern for the public in its frightening suffering,  with no prospect of a vaccine for at least a year. Just as Donald Trump’s $2 trillion relief package acknowledges that the leader’s responsibility goes beyond doling out pious platitudes, Modi must accept that a caring government must respond to the pandemic and its fall-out call with more than immediate monetary compensation.

Looking beyond Covid-19, the totality of long-term welfare demands attention. Money may be scarce but supplementing the 52 testing centres for 1.3 crore Indians is far more important than the prime minister’s 48 foreign tours in 2014-2018 that cost a reported Rs 2,021 crores. India desperately needs laboratories, hygienic hospitals, critical care beds, trained para-medical staff and quarantine facilities. A density of 455 per square kilometre, against China’s 148, aggravates the filth and squalor in which so many Indians live and makes “social distancing” impossible. The poor are the most vulnerable, especially when they have additional medical complaints.

The cost of improvements can only be guessed at. The UN’s trade and development agency, UNCTAD, laments that apart from the tragic human consequences, the economic consequences of Covid-19 may saddle the global economy – which is expected to slow down this year to under two per cent – with a $1 trillion bill. Necessary though it may have been, the so-called “Janata Curfew” that brought India to a standstill on Sunday cannot have come cheap.Closures ever are. Some estimated the cost of the Bharat bandh the Congress and 21 other parties called in 2018 to protest against fuel prices at more than Rs 4,000 crore. Assocham’s calculation was between Rs 16,000 and Rs 18,000 crore. The CII more modestly estimated the loss to the economy “would be greater than Rs 3,000 crore.”

Europe faces recession. Indian conditions may deteriorate further with the withdrawal of more than `100,000 crore in foreign portfolio investment this month. As an exporter of raw materials, India faces a particular threat since weaker export returns are linked to a stronger US dollar. Nor can any computation of the cost of the pandemic be complete without allowing for the massive corruption that is integral to all aspects of life here.

No one knows, for instance, how much of the Rs 1,000 per head that the Uttar Pradesh chief minister has promised 15 lakh daily wage labourers and 20.37 lakh construction workers may be siphoned off by those who sanction and distribute the money or have to be shared with ubiquitous middlemen. Mahatma Gandhi National Rural Employment Guarantee Act beneficiaries in some states speak of two distortions, although they don’t see them as such. First, instead of providing a job, the NREGA actually provides an income with no labour in return. Second, the income has to be shared with the official who hands it over.

It has become fashionable now for Western liberals to applaud Indians who blame all Third World ills on white colonialism – the 1943 Bengal famine being presented as Winston Churchill’s particular revenge on India. Yet, any moderately well-informed middle-aged resident of Calcutta knows the names of the Indian businessmen who became notorious during World War II, because their cynical hoarding contributed to the food shortage that killed millions.

“In an independent India such black marketeers will be hung from the lamp post”, Jawaharlal Nehru declared as soon as he was released from prison in June 1945. Alas, the promise was forgotten when those very same businessmen financed the movers and shakers of independent India. That linkage between politics and big money remains as strong as ever. As for contriving profit-making shortages, the price of potatoes shot up from Rs 10 a kilogram to `30 as soon as the pandemic was acknowledged. Established chemists demanded Rs 250 for a face mask that would not ordinarily have cost more than Rs 100.

Official policy can contribute to shortages. The World Health Organisation has ruled that gloves, masks, eye protection, decontamination suits – called personal protection equipment– are mandatory for all health workers testing or treating Covid-19 patients.The day after India detected its first coronavirus case on January 31, New Delhi very commendably banned the export of all personal protection equipment. But to what end? A month and a half later, the heads of two associations of PPE manufacturers told the media that the government had not placed any substantial orders with their member companies. People had no option but to pay exorbitant prices for masks which are in universal demand.

No item of expenditure, not the Rs 186,000 crore purchase of Rafale fighter jets nor the Rs 404,365 crore defence budget can claim precedence over the people’s health.The medical tourism provided by a few elite hospitals in Delhi that throw in the bonus of a sightseeing tour in an air-conditioned limousine doesn’t make a welfare state. Nor does an obsequious journalistic chorus ever ready to applaud those in power indicate the discerning media that a nation needs. It would be even more mistaken to imagine that five minutes –stretched out to ten in my building – of the national predilection for noisy celebration,which also copied a Spanish precedent, on Sunday evening absolved the government of its responsibility to create a kindly welfare state that provides full medical care for all citizens.