Lockdowns are overkill, and won’t tame the virus 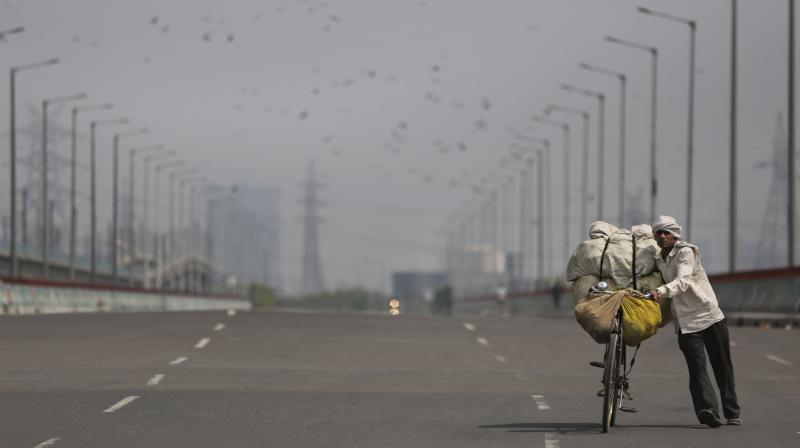 A vegetable vendor pushes his bicycle loaded with vegetables on an empty street during a complete lockdown amid growing concerns of coronavirus in Noida, on the outskirts of New Delhi on March 24, 2020. Authorities have gradually started to shutdown much of the country to contain the outbreak. (AP)

It’s a beautiful, clear, clean night. But the streets are empty. The traffic is sparse --its absence is soothing as compared to the usual nerve-wracking clatter. Houses are full and public spaces sparsely populated.

Cities are blanketed in a pall of apprehension and sobriety -- almost village-like, where chudails (witches) lurk around every peepul tree at night in search of the unwary traveller-- most unbecoming for the throbbing engines of the economy which urban spaces are meant to be.

Everything lies suspended, watchful and waiting for the next big announcement. The Centre decided earlier this week to impose an all-India lockdown. It is widely supported. It seems to protect the healthy (the majority) from the infected few by locking everyone into their homes, their communities and towns--like locking up the entire town in jail to protect citizens from criminals. It is an endgame option. For India it is an overkill.

It simply can’t work without a huge mobilisation of public services to cater to locked-in populations. Workers manning electricity supply, transport, water supply and telecom connectivity need to be able to reach their places of work by navigating the localised lockdowns. Similarly, goods need to keep moving through the mandis, transport hubs and retail points to reach locked-in people.

In short, the 'lockdown' cannot be a curfew -- an unfortunate expression chosen by the Prime Minister’s speechwriters -- which has stuck in the minds of the public and administrators. A curfew means keeping public spaces clear of all but police movement. This is the last thing we need.

Unnecessary hardship would result. Retail stocks can run dry, prices increase and the hoarding instinct kick in. Why create isolated, tepid ponds of people when you can regulate the river of out-of-home visits. Delhi has a population of 22 million. About one to two million people would need to come out of their homes daily to buy food, water, medicines, access ATMs, banks or other services.

Online e-commerce is specifically exempted from the lockdown. But it cannot work if misguided or poorly informed policemen stop the delivery agents on the roads. Communities have locked parks to avoid tempting citizens out for a stroll through the greens. Vigilantes berate people coming out of their homes. All this ignores the basic directive that movement per se is not restricted, unless one is unwell or in quarantine. It is the assembly of five or more people which is banned to avoid over-crowding in public spaces -- very necessary in densely packed India.

People are shutting their doors and windows as if the pestilence can waft in to infect them. With the weather turning warm, natural air circulation should be encouraged, not stopped. Completely lost in the raft of guidelines are two simple but important behaviour changing tips.

First, maintain an arms-length distance all around -- a virtual penumbra of safety. Second, wear a mask and gloves to shop or to supply. Desist from the essentially Indian habit of non-essential touching of fruit, vegetables, doorways or each other. Washing the safety gear on return and leaving shoes outside the house, as is traditional in India, are extra precautions.

Doing all the above will not only enhance safety but reduce the economic costs to the minimum.The engines of productivity -- factories and offices -- should be encouraged to work normally, but under strict health supervision. Staggered attendance of employees can reduce the transport load and enhance the effective floor space per employee, thereby adhering to social distancing norms.

Factory and shop owners must monitor workers daily as an entry level filter for early isolation of the affected. Markets can employ these facilities on a cooperative scale to reduce the per unit cost. Quarantine facilities should be contracted in by the government in all towns with large concentrations of factories and service sector units. Think Surat, Jalandhar/Ludhiana or Tirupur, for example.

Rather than taking buses and metros off the roads, it’s better to replicate the spatial distancing guidelines inside them. Regulate access to a metro station and onto a bus. Put armed marshals at all metro stations, railway stations, trains and buses. Fix the maximum footfall to 50 per cent of the carrying capacity and enforce it. The same goes for air travel.

Employ temporary, paid, young workers to regulate human traffic by thermal sensing at all boarding points – bus stops, metro stations and train stations. It’s equally important to explain to all the inconvenienced travellers why the constraints are necessary.

Make water available at all public toilets along with disinfectant soap to encourage higher handwash standards. This involves 24x7 monitoring of such facilities since piped deliveries are chronically in short supply.

Finally, mobilise the 80,000 students studying to be doctors in 600 medical colleges and another 20,000 students studying to be nurses in 900 nursing colleges -- a total of 100,000 budding medical professionals. They could provide professional leadership in public health education and community counselling whilst putting their skills to practical use in an emergency.

Sadly, governments often believe their job ends by allocating a large chunk of public money. But innovating the public plumbing for managing an emergency is more important. State governments in Kerala, West Bengal and Delhi are enhancing social protection benefits, Uttar Pradesh is committed to a direct benefits transfer for the poor, several states are arranging for school attendance-based food aid to be given to students and arranging food for destitute pavement dwellers.

Big business advice on what the government should do is along expected lines -- direct transfer of income, defer loan repayments, relax liquidity norms, relax the definition for stressed loans and lower interest rates. Covid-19 management is now eligible tax deduction CSR spend. In return corporates should commit to offer voluntary price reductions --necessary anyway to enhance sales in a downturn.

Covid-19 will be with us for the next four months. We face a policy trade-off between total physical insulation with the downside of massive economic disruption -- a possible loss of two percentage points out of an expected annual growth of five per cent in fiscal 2021, plus an overshoot of the fiscal deficit target. The option is to reduce the economic disruption by keeping the urban value addition engines running and thereby reduce the draft on fiscal resources. Implement evidenced and targeted containment of infection with medically supervised economic continuity.

Silent nights lull one into believing that all is well. But the silence of economic graveyards can be very expensive for struggling economies like ours.