Sucheta Dasgupta | Hope in the time of sorrow and C-virus

Despite its no-pussyfooting bravado and stupendous majority, the govt did not declare a lockdown on Holi. The Kumbh continued uninterrupted 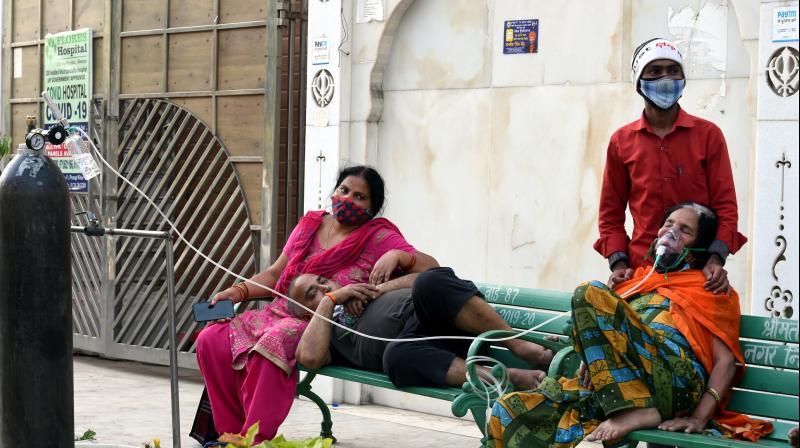 A ghost lives in my body and watches over the state of my heart. It does not take up space. It refuses food and drink, and speaks only when spoken to. I consult it when I need to identify my feelings. For my benefit, it keeps a record of them. For some reason, strange or otherwise, I alone was never an adept at that.

The only time the ghost speaks to me of its own accord is when I am tired. Whenever I expend myself beyond my lung capacity, it tells me: This is how it felt for him, too, when, for instance, he resumed breathing for your sake, twice coming out from under ventilation. And the cold finger of guilt grips my heart.

The first time I heard the ghost speak was when I was perspiring over the griddle a full year after Baba died.

Baba went under ventilation three Marches ago, in the late spring of 2018. The lone tree tucked away at the back of the interstate bus terminus was full of stars.

Baba did not die of the coronavirus. Following cardiac and kidney failure, he died of septic shock. Between the two illnesses, the pneumonia was the common factor.

Baba, a doctor, has missed out on the whole pandemic plus the vaccine conversations.

I have given up exercising for fitness. There is no one to perform for, vie against, show off. It puts me on a better footing than the children in my neighbourhood, fretting because they want to but cannot play. Less than a month ago, I saw a desi mother supervising their games in the park as I silently applauded her. To me, she was the pith of society, salt of the earth. That was then, though. This is now. In-between, the coronavirus has exploded and is now spreading furious and fast.

Despite its no-pussyfooting bravado and stupendous majority, the government did not declare a lockdown on Holi. The Kumbh continued uninterrupted. The virus, meanwhile, reached the interiors and the second wave has since surpassed the first one. The daily case count is over three lakhs. Experts say the peak is many weeks away. India is notorious for its non-existent chains of primary and secondary medical infrastructure. My husband held that these omissions on the part of the government — failing to declare a curfew, call off the Kumbh and so on — fell on its policy blindspot.

Well, one didn’t. The decision to hold an eight-phase legislative assembly election, ongoing in the present, was deliberate. My home state, West Bengal, was chosen for this singular punishment. Our leaders thus dropped the ball when our severely constrained health workers had almost won the match. The latter slogged away alone. Many did not return home in days. The hospitals were full of despair.

A young man asked a photographer to click the smoke coming out of his mother’s pyre. She was there.

The high courts stepped in. They bore upon the Centre to direct uninterrupted transport of oxygen across state borders. India is the world’s largest producer of industrial-grade oxygen. But earlier, state governments had refused to come on the same page on this simplest of measures.

Even though I am his eldest, I am not going to my hometown to perform Baba’s annual rite. My younger sister will fill in for me. The coronavirus is a factor. But what made the decision for me is my awareness from the start that I have not been a good child. While he never needed me to, I did not help Baba take care of the family. No one took care of him, on the other hand. I spurned his wish for me to become a doctor. For the sake of my journalistic quest, I abandoned him.

My rishirin to Baba will be paid when I complete my memoir of our differences. Baba was a flawed man. But no one, including a never-genuinely exceptional me, had a mind like Baba’s. Periodically, the seed of my guilt bursts on my skin in angry hives. When I work very hard and accomplish a minuscule amount of good it goes away. I risk losing a bit of my memory of Baba whenever that occurs.

The young child I know in our condominium has started school. But school is online and she does not speak a word, and I worry that the lack of physical contact with classmates and peers will further rob her of that incentive. Whenever we meet, I am infected by her boundless energy. But she is more poised than I ever will be and never exposes her weak spots. Like her inability to articulate. Her absence of vocabulary.

I, too, had once chosen certainty over sharing, but I had been pushed to do that.

I dream of her growing up. To being from nothingness, darkness to light. Like Vak, daughter of Ambhrin, she will give a name to all existence, one by one, that will, in turn, give rise to noun, thought, knowledge and identity. That day, should I be around, she will probably look into my eyes with those great big ones of hers and there will be a reckoning. Or there will be not.