Why give them rice, dal and water, was his point, when we could give them life-affirming art and literature 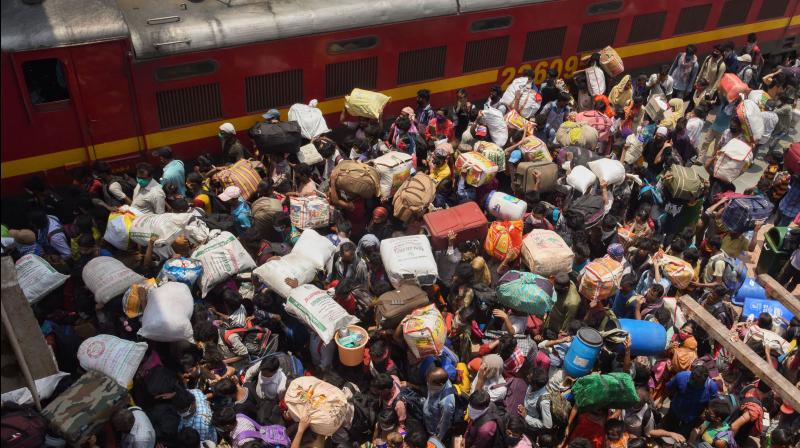 Migrants, not adhering to social distancing norms, wait to board a train to their native places at Danapur railway station, during the ongoing COVID-19 nationwide lockdown, in Patna. PTI Photo

This is a piece about a piece I didn’t want to write. And, subsequently, how I wrote about why I didn’t want to write it. On FB. And how that proved I was right in not writing it in the first place. No, I am not Swami Nithyananda writing pseudonymously from Shrikailasa and teleporting this piece to DC via soooperconshussnessss. (Though I do think there is something to the depth of the physics being equal to the length of the geography.) Hear me out.

Just a while ago, a leading vernacular newspaper asked me if I could write a piece on someone I’m related to. A piece about what it was like growing up under his gaze, that kind of thing.

The following day, I apologized to them saying I would have to decline. The editor asked me why. I said it seemed unfair on my part to celebrate this person in this manner at a time like this.

She said she understood. But I don't know if she did. She couldn’t possibly have seen the italics in my response. The reason I declined was not because I thought the person was unworthy of celebration. Or that it was inappropriate on my part to celebrate him now.

It was more to do with how we ought to celebrate anyone or anything at all in these times. And by ‘we’, I mean the privileged.

Had I written purely about what he was mainly known for, no one would have faulted me. His work is formidable and relevant.

Not enough people knew that he had another side to him, too: social reformer. And that he had defied convention and community, and fought for the rights of, well, let’s just say, the downtrodden.

The right kind of stuff to recall and celebrate, you’d think, when our country’s rich, selfish and entitled are putting up recipes, work-out videos, and sari challenges as the poorest of the poor are dying in ways we can’t imagine.

But I still didn't think it was appropriate to write about him.

By writing in a newspaper, something only the privileged (and by that I mean anyone who has footwear, whose three meals a day are assured, has a roof over his head and won’t die of starvation anytime soon) have access to, or can afford, for that matter, I wondered what I would have achieved.

Would I have disturbed the comfortable, as they drank their second dose of filter coffee, paper in hand, their biggest worry being why their bm wasn’t entirely satisfactory? Would I have comforted the disturbed? Not a chance. Which hungry soul’s calloused feet would my piece have applied balm to?
Would the man himself be writing were he around now? I think not. He would be out there doing something.
Within minutes of my posting this, predictably, a cloth-bag-brandishing intellectual, the kind that doesn’t normally grace downmarket dives like my page, swooped in.

“Sorry Krishna,” he expounded. (His ilk never just say, they expound, explicate and expatiate.) “I don't buy this writing vs doing dichotomy. That's lazy theorizing. Sometimes, writing is doing. We certainly need to celebrate writers like this relative of yours. The unslippered anyway take comfort in songs while they trudge along the highways, and who knows one of those songs could be his.”

These are the actual words of the gent. And I use that term loosely.

He referred to the guest workers as the unslippered. And he actually believed the guest workers, currently dying on railway tracks and in road accidents if hunger, thirst, heat, exhaustion or plain despair hadn’t got to them already, needed songs, ditties and stand-up comedy, perhaps. And poets, writers, composers, filmmakers should busy themselves making inspirational art to save them, soothe them, as the disaster is still ongoing. Because painting, writing and sculpting were doing, too. Why give them rice, dal and water, was his point, when we could give them life-affirming art and literature.

It was as if Nero and Marie Antoinette had had a love child.

It’s not the casual callousness of the ones we dismiss as philistines that we need to worry about. It is the pathological lack of empathy on the part of the so-called intellectual class, the lot that has appointed itself caretaker and curator of art and literature, that frightens me.

The funny thing, by which I mean sad, is despite my FB post being about our appalling lack of empathy, even the ‘positive’ responses, from 95% of the folks, were about this relation of mine.

All isn’t lost, though. Saw another post on FB, that of a mother congratulating her daughter on her graduation. ‘Hope the future is full of happy surprises, baby girl,’ she said. ‘Waiting to celebrate once the world heals.’