Veena Das
The writer is Krieger-Eisenhower professor of anthropology at the Johns Hopkins University and a corresponding fellow of the British Academy. 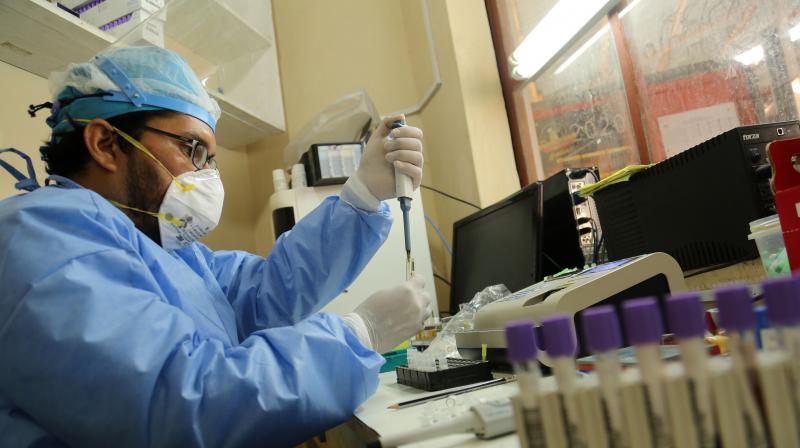 A lab technitian works on blood samples at the Cesar Garayar support hospital in the city of Iquitos, in the Amazon basin. AP Photo

It has become common to pose the fundamental issue today under conditions of extreme uncertainty produced by the coronavirus in terms of a tradeoff between saving lives and saving jobs. Yet there are no serious discussions on how to proceed.

What would an honest portrayal of partial knowledge entail for governing under crisis, especially for democratic societies? In a recent discussion, I had with some data scientists it seems that the greatest fear is that if scientists begin to show any hesitation in the predictive power of their models then people will lose faith in science. In that case, it is argued it will be even tougher to impose regulations such as lockdowns, stay-at-place orders, or social distancing.

It is well known among historians of epidemics that the management of crises produced by epidemics have led to vast extensions of state power — for instance, plague regulations equipped states with draconian laws, and administrative techniques that still surface when new epidemics arise. Yet the nature of viruses are changing, our understanding of the human-microbe relations have undergone radical changes and new epidemics are unlikely to be repeats of earlier ones. Should our models and forms of implementation not change to keep pace with these realities?

Let us start by revisiting the highly influential Imperial College Covid-19 response team’s forecast on the impact of alternative non-pharmaceutical interventions. As the report then noted, there are two strategies, which could be followed. The first was that of mitigation that would consist of slowing but not stopping. That would mean reducing peak hospital demand, protecting those most at risk and adjusting policy as more data began to come. The second would be suppression geared to reducing the epidemic growth, reducing case numbers, to low levels and maintaining that situation indefinitely till a vaccine became available or the pandemic disappeared for unknown reasons (not an unknown phenomenon in the history of epidemics.) It is striking in this report that it frankly admitted that “we do not consider the ethical or economic implications of either strategy. Instead we focus on feasibility.”

Translated in ordinary speech this means that the assumption is that it is more feasible to impose stay-at-place orders for all rather than think of containment in terms of risk assessment taking into account the fact that there have been unexplained differences in the infection rates, the infection fatality ratios, and the proportion of people in a population who are infected but asymptomatic. No attempts were made in these models to assess the feasibility of people living in slums in crowded conditions to observe social distance or to predict how total lockdown orders would mean that certain categories of the poor such as migrant labour would try to return to their villages in large numbers.

It is by now well-known that it is extremely hard to say what the infection rate of Sars-CoV-2 is, and even more difficult to ascertain infection fatality rate. Confirmed cases of Covid-19 have been measured by rates of positive finding among people who have been tested for infection. Data are missing for those who have not been tested. The profile of the disease is highly variable, and we know that a very small fraction of the total population of a city, or a nation, has been tested. Under these conditions would it not have been wiser to admit that policy prescriptions are better made in a piecemeal fashion, learning as we go along?

For instance, the same policy of stay-at-place orders probably worked very well to reduce the spread of infection in New York and to reduce pressure on hospitals. But even there it did not work that well for African American residents of the city who died in disproportionate numbers whether because of preexisting conditions, or because their ability to access hospitals was much more limited than of white populations. Where the spectrum of assumptions to calculate even such basic facts as infection rate, proportion of people who are likely to become critically ill, and infection mortality rate, yields very different numbers, and there is no consensus on these facts, how should scientists proceed? First of all, I suggest that we need much more open acknowledgment of the fact that the knowledge scientists have of the pandemic at this time is partial and likely to remain so for some time.

Some economists are questioning if the draconian measures adopted in countries such as India might not themselves have created the conditions in which non-Covid-19 related morbidity might lead to excess deaths. Already there have been complaints that hospitals are turning away cancer patients, or those with other serious conditions because of shortage of doctors and other health personnel. Under such conditions, what you need is much more open discussion and generation of more systematic data on how vulnerable populations are being actually affected by the lockdowns. Instead, the government’s strategy is to try to suppress open discussion and to blast their way through the crisis by a series of lies.

Second, given the uncertain trajectories of this pandemic and the complexity of the social realities any attempt on the part of the government to suppress the data should not be tolerated. In a status report submitted to the Supreme Court at the end of March in connection with a PIL on migrant labour, the attorney general submitted that people are easily panicked and that panic had been spread by irresponsible reporting on the media. It sought approval of the requirement that any writing or discussion on Covid-19 must be first vetted by the government. In this case, the request was denied but it is a pointer to the impulse to suppress discussion.

We should realise that people are not easily panicked by acknowledgements of uncertainty in scientific knowledge but they are crushed by the uncertainty generated by the kind of government orders that leave no room for them to sustain their already fragile arrangements for provisioning and social support.