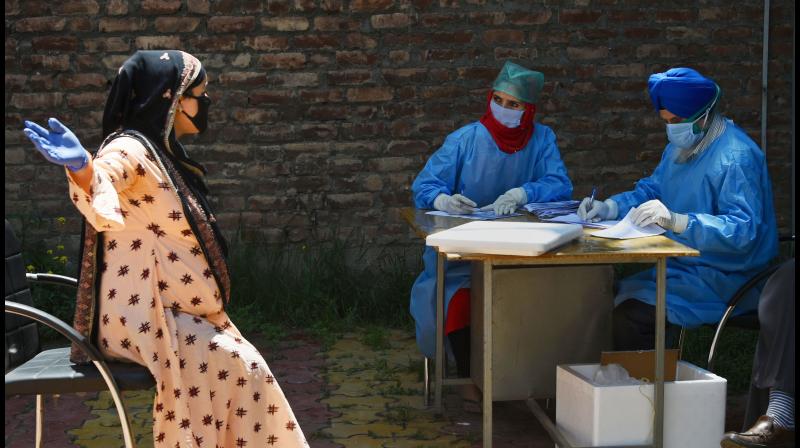 : Health officials wait to collect samples for COVID-19 swab tests, during the ongoing nationwide lockdown to curb the spread of coronavirus. PTI Photo

The government may have started opening a bit but the coronavirus pandemic scare is taking a heavy toll on the political class. The buzz is that 10 Janpath is without its regular cook. Apparently non-residential domestic help are not encouraged to come and go everyday by VVIPs. Rahul Gandhi’s 12 Tuqlaq Lane, however, seems to have a regular cook and it’s business as usual. Some with a keen eye have even noticed food often finding its way from 12 Tuqlaq Lane to 10 Janpath. In the Nehru-Gandhi household, cooks and personal attendants enjoyed respect and attention. After the 1977 defeat, Indira Gandhi’s cook left for home and she declined a replacement fearing foul play by her political rival. A woman Congress politician is said to have helped her with household chores; she much later rose to occupy an important position.

All is not well in the prestigious Delhi Gymkhana Club. The Union ministry of corporate affairs is reportedly investigating into its affairs. For reasons best known to itself, the National Company Law Tribunal (NCLT) chose the period of the lockdown to speed up its investigation of the club. There is speculation that speed was essential because one of the ministry’s babus wanted to jump the membership queue; denied this, he is using this case as leverage to get his way. But what is riling some club members is that part of the NCLT’s case against the club is a petition filed at the Serious Fraud Investigation Office (SFIO) by seven disgruntled club members including a former president and ex-transport secretary. Since this complaint forms part of the MCA’s case against the club, Gymkhana sahebs feel it could undermine the ministry’s case as it is based on an individual’s vendetta. Is this what the MCA is spending the tax-payer’s money on, they ask. According to them, the club has already begun an internal investigation into most of the issues raised by the MCA.

The lockdown is coming in handy for former state ministers in Madhya Pradesh state capital Bhopal. Former ministers in the Kamal Nath government were slapped eviction notices by chief minister Shivraj Singh Chouhan. Congress leaders are pleading with Chouhan to let them stay as strict lockdown conditions in Bhopal are coming in way of shifting out of official bungalows. A crucial by-election in 24 Assembly seats is due in the state that will have a bearing on the survival of the Chouhan regime as the BJP had mustered a majority with large-scale desertion and defections from the Congress. Chouhan is, therefore, showing little mercy towards the Congress.

In terms of numbers and political strength, the Congress is the number four political party in Uttar Pradesh, but thanks to a spirited campaign by Priyanka Gandhi, the grand old party is posing a challenge to the BJP and chief minister Yogi Adityanath. Alarmed by the rise of the Congress, anti-BJP parties like Bahujan Samaj Party and Samajwadi Party have begun targeting Priyanka and Congress instead of the BJP. Mayawati, Akhilesh Yadav and Delhi chief minister Arvind Kejriwal boycotted a video-conference meeting of the “united” Opposition that was called to oppose Prime Minister Narendra Modi’s “farcical” economic package and the neglect of states during the coronavirus lockdown. While Priyanka seems to be doing well against the BJP, not every Congress leader in Uttar Pradesh is happy with her private secretary Sandeep Singh. A former student union leader, Sandeep recently courted controversy when an audio-clip of him allegedly abusing party workers started doing the rounds on WhatsApp groups.

When Bengal was devastated by Cyclone Amphan, President Ram Nath Kovind was quick to call chief minister Mamata Banerjee to express his concern. Mamata enjoys warm and cordial ties with the incumbent at Rashtrapati Bhawan while her rapport with BJP-NDA regime is uneven. Oldtimers recall how Mamata was among first few callers when Kovind took over as President in 2017, even while Opposition parties like the Congress were maintaining a distance.