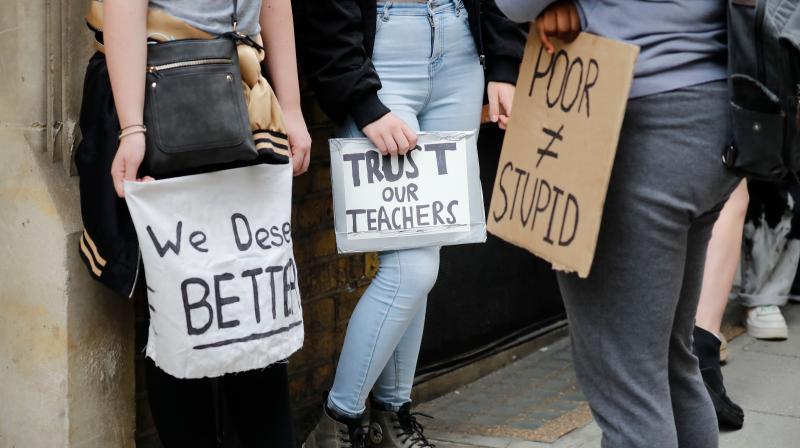 Students hold placards as they protest outside the Department for Education in central London to protest against the downgrading of A-level results. AFP Photo

“Time waits for no one
A carriage with a steady pace
Time, they said was a healer
With oblivion’s embrace
Time was not to be wasted
But what really was there to do
Time takes us into timelessness
I think it’s about time too…”
— From Khadiboli to Hyperbole by Bachchoo

In my schooldays in Pune, if you failed a final exam at the end of the year, you stayed in the same class and repeated the year. And the same at the end of that year which led to some classmates being several years older than the class average.

A memorable consequence of this rule entailed a classmate in my final year called Faruq Rehmatullah. He must have been four years older than the rest of us, had a gruff voice and sported a moustache.

Sometime before the final exam our headmaster, Arthur Lunn, interrupted a geography lesson and asked Faruq to please step outside. The entire class in complete silence strained our ears to hear what was being said on the classroom veranda.
“Er.. Rehmatullah, you were seen on Main Street yesterday evening wheeling a pram in the company of a young lady,” Lunn said.

“Who was the young lady?”

“And there was a baby in the pram?” asked Lunn.

“I need to speak to your father. We can’t have married men with families in this school,”
Lunn said.

Faruq followed Lunn to his office and returned half an hour later, emptied his desk and left. His toil with annual exams was over.

So, it was with a sense of wonder that I discovered, on taking up my first school-teaching job in London, that pupils went from one year to the other regardless of their achievement in exams. They were graded each year, as in India, but the grade didn’t determine promotion to the next year. Only their age did.

British children are obliged to stay in school till they are 16. At 16 they sit an exam, which is a general school certificate called the GCSE. Their scores in the subjects they take in these exams qualify or disqualify them from going on to two further years of schooling.

Those who choose to go on and achieve the grades in their 16-plus exams then spend two further years in school and at the end sit exams called A levels. The grades they achieve in these exams qualify them to join universities or other higher education institutes of their choice, with the universities setting the standard of grade they require for a candidate to qualify. In a normal year, the A level student would specify three universities of their choice in order of preference.

The universities would then say that they require the student to achieve, for instance three ‘A’ grades in three subjects to gain entry to the chosen course. Or they may say two ‘A’s and a ‘C’ would be acceptable.

This Covid year, with schools and exams disrupted since March, the whole system of application to universities, and the qualifying hurdles for entry into the sixth form have been thrown into absolute turmoil.

Normal schooling was interrupted for two to three months before the final exams, which take place in May or early June. Most schools hold “mock-exams” early in the year to accustom students to the levels and discipline of the finals they face in May.

Their teachers mark these “mocks” and, on the basis of these and of other forms of assessment through the year, assign each pupil an estimated grade.

This year, because the education ministry under the faltering leadership of the education secretary, Gavin Williamson, a former fireplace and ceramic salesman, cancelled all school final exams. This meant that the normal exam-result qualifications for entrance to universities would not exist.

Gavin then determined, with the help of advisory boffins, that the estimated grades handed out by teachers for the A level pupils would be subject to an algorithm.

This algorithm would take into account the performance of any school over the past few years and then “adjust” the teacher-awarded grades with reference to this past performance.

Hence, if a school only had one pupil with an ‘A’ grade in a subject last year, and it was estimated that four pupils had ‘A’ grades this year, three of those pupils would have their grade arbitrarily, algorithmically reduced to a ‘B’ or worse to a ‘C’ or ‘D’ or ‘U’.

This would result, en masse, in what in Britain is known as the “post-code lottery”.

Allow me, gentle reader, to explain: The country, as in any other country, and its cities have rich areas and poor areas. The schools in the poor areas, attended by the children of the working classes inevitably have lower achievement standards than schools in the “posh” areas.

The algorithm, with no regard for the effort or real achievement of pupils and teachers, downgrades pupils because they attend schools in the poorer areas of town — each area having a “post-code”.

The results, subjected to this post-code were published.

Thousands upon thousands of pupils, overwhelmingly from working class families, got grades lower than those predicted by their teachers or specified by universities as qualifying for a place. It was a blow in the teeth of Britain’s meritocratic system which, since the 1950s and compulsory secondary education has allowed working class generations to progress on the professional and economic ladder.

What I would call the Fair Exam Grades Matter movement now took to the streets. Thousands of pupils protested and scores of court cases were threatened. In a humiliating U-turn, Gavin apologised and reversed his decision.

The algorithm results would be cancelled and students would keep the grades of their mocks exams or their teachers’ estimates, whichever was higher.

On this issue, without the help of an algorithm, BoJo’s government gets a ‘U’, the lowest possible grade.