Article 370 of India’s Constitution is under challenge in the Supreme Court. 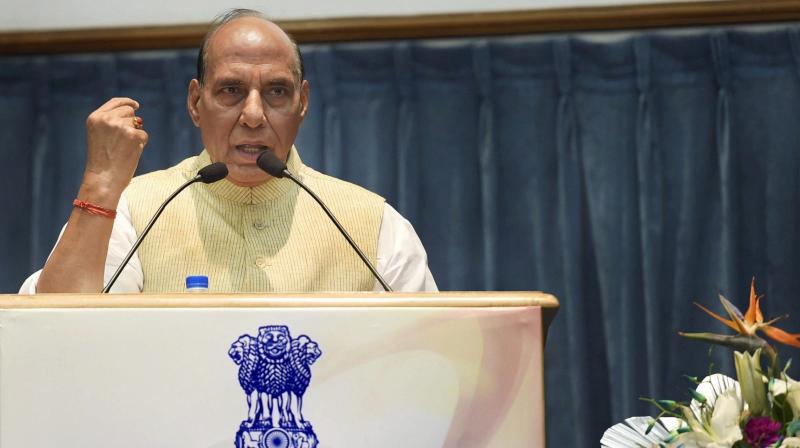 Home minister Rajnath Singh spoke of the need for a “political solution” and a “permanent solution”. (Photo: PTI)

Kashmir recently suffered the visits of three delegations, none of which offered even a glimmer of hope. Each showed that it had nothing to offer the people beyond empty words. None offered a policy.

Home minister Rajnath Singh spoke of the need for a “political solution” and a “permanent solution”. On neither did he indicate even the broad outlines of a solution but sought refuge in deceptive vagueness. “Our permanent solution is based on five ‘C’s — compassion, communication, coexistence, confidence-building and consistency.”

The oppressed Kashmiris have received anything but “compassion” from New Delhi. The deception was fully exposed upon Singh’s return from Kashmir, when it was revealed that he had sanctioned the security forces to “adopt a more aggressive policy of hot pursuit” against terrorists (read militants) before winter. He directed the Army, paramilitary and police there to virtually double their operations to stamp out the last remaining militants. Eliminate a majority of them and secure a “permanent solution”. As if the alienation will vanish even if militancy is crushed, or that there will be no replacements for the militants who are “eliminated”.

Meanwhile, a time bomb ticks. If not defused in time, it will engulf the Valley in flames. Article 370 of India’s Constitution is under challenge in the Supreme Court. Though denuded of all content as a guarantee of autonomy, it survives as a symbol of the distinct identity of Kashmir. But another constitutional provision retains its potency. It is Article 35(A), which was inserted in India’s Constitution under the Delhi Agreement, 1952, between Prime Minister Jawaharlal Nehru and Kashmiris under their Prime Minister Sheikh Mohammad Abdullah.

It gives constitutional protection to a rule made by the Kashmiri ruler in 1927 defining a “state subject”. Article 35(A) protects these rules from constitutional challenge on the ground that they violate any of the fundamental rights. Article 6 of Kashmir’s constitution confirms that protection. There are similar curbs on “ownership and transfer of land” elsewhere too, such as Nagaland and Mizoram.

Nehru explained the raison d’être of the restrictions in a speech in Parliament on July 24, 1952: “(I)n the Maharaja’s time, there had been laws there preventing any outsider, that is, any person from outside Kashmir, from acquiring or holding land in Kashmir... (T)he Maharaja was very much afraid of a large number of Englishmen coming and settling down there... So although most of their rights were taken away from the Maharaja under the British rule, the Maharaja stuck to this that nobody from outside should acquire land there. And that continues.” Hence the houseboats on the Dal and Nigeen lakes.

A BJP sympathiser filed a petition in the Supreme Court challenging the validity of Article 35(A). It has united Kashmiris. In Srinagar, Rajnath Singh was pointedly asked to define the Centre’s stand on it. He called it a non-issue, and gave a vapid assurance: “We will not do anything against the sentiments of the people here.” There was no assurance of support to Article 35(A) in the Supreme Court. A well-informed daily had reported before the minister’s visit to Kashmir that the Centre is “likely to take a divergent opinion from that of the Jammu and Kashmir government on Article 35(A)”.

The two non-official delegations, meanwhile, provide a study in contrast. The Concerned Citizen Group, led by former external affairs minister Yashwant Sinha, said in its report that there has been an increase in alienation between the youth of Kashmir and others. “Even the people who used to talk reasonably earlier were using the language of the militants and separatists this time.” It reported “all round Opposition to attempts to revoke Article 35(A)” as “people see the attempts to change rules for special rights of people of J&K as an existential threat of changing the Valley’s demographic profile”. Demands for azadi have “neither disappeared nor become secondary”.

The Congress delegation led by former Prime Minister Manmohan Singh visited Kashmir last week. It is no secret that his liberal stand on Kashmir was never and is still not shared by his party. The delegation was to “take stock of the situation”. The Congress will not stick its neck out to help Kashmiris on any significant aspect for fear of losing the support of its vote bank.

Neither the BJP government nor the Opposition has any policy on Kashmir. While all in the Opposition are opposed to the Centre’s machinations, there is no effort to forge a united front on Article 35(A), which poses an existential threat to Kashmir.