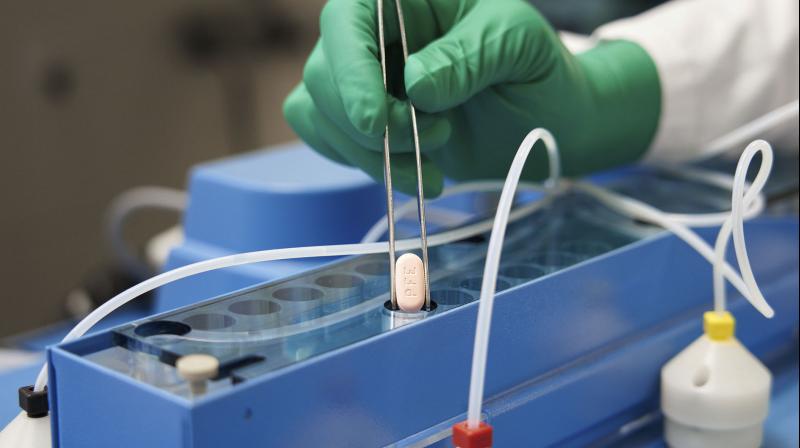 This image provided by Pfizer in October 2021 shows the company's COVID-19 Paxlovid pills. U.S. health regulators on Wednesday, Dec. 22, 2021 authorized the first pill against COVID-19, a Pfizer drug that Americans will be able to take at home to head off the worst effects of the virus. (Pfizer via AP)

On December 22, the US Food and Drugs Administration approved an oral Covid-19 drug Paxlovid. The oral drug, Molnupiravir, too, received emergency authorisation in the US on December 23. A few weeks earlier, on November 4, the British drug regulator had authorised Molnupiravir. This is a major development on the Covid-19 drug fronts, especially as in nearly two years since the first reports of SARS-CoV-2. While there has been some remarkable successes on Covid-19 vaccines, the search for Covid-19 drugs and therapies has remained elusive. Many repurposed drugs, investigational and experimental therapies have been explored, but in randomised controlled trials, a majority, if not all, have proven either ineffective or less than promising, at best inconclusive evidence.

There has been some useful insight, including that Covid-19 has two distinct clinical phases. The initial “viral phase” (first 7-10 days) in which the replication of SARS-CoV-2 predominates. The later “immune and inflammatory phase”, in which a person’s immune defence system takes charge of responding to virus and recovery.

This understanding has practical relevance in Covid-19 clinical management, that the antiviral drugs (inhibiting virus replication) work better in the first phase and the immunomodulators, immunosuppressive/anti-inflammatory drugs in the later phase.

The clinical research evidence has indicated the selection and timing of initiating the Covid-19 drugs has to be more nuanced. To be optimally effective, each drug must be used in a very narrow window, at a specific stage and under specific conditions. Budesonide, an inhaled steroid, works well in early illness, while dexamethasone, another steroid, works better in hospitalised patients. Monoclonal antibodies work best for mild to moderate cases at high risk of progressing to serious disease. Tocilizumab, an interleukin-6 blocker, is recommended for a subset of patients on high-flow oxygen or non-invasive ventilation, in combination with other therapy. Nearly all currently available Covid-19 drugs need to be given either intravenously or through injections, in hospital settings and under close monitoring.

It’s in this backdrop that approvals of two new drugs, Molnupiravir and Paxlovid (both can be taken orally), has revived hope. In fact, Paxlovid has been approved by the US FDA as a take-home oral Covid-19 therapy. In clinical trials, Paxlovid was found to reduce the risk of hospitalisation by 89 per cent and deaths by 100 per cent. Molnupiravir, in the interim analysis, was reported to reduce the risk of hospitalisation and death by 50 per cent, later adjusted to 30 per cent after the final analysis. These drugs are recommended for mild to moderate cases, non-hospitalised patients, to be given within five days of developing symptoms.

The mechanisms of action of both Molnupiravir and Paxlovid is independent of the mutations in the spike proteins of SARS-CoV-2, which essentially means these would continue to be effective against Omicron, and even when more new variants emerge. Paxlovid is a protease inhibitor which halts the virus multiplication by blocking an enzyme which SARS-CoV-2 needs to replicate in the body. It is not recommended for people with severe kidney or liver diseases. Molnupiravir is a pro-drug, which first needs to undergo processing in the human body, to become an active ingredient. Thereafter, it follows a mechanism termed as “error catastrophe” or “lethal metagenesis” in the viral genome, making the virus’ further replication and survival unviable.

The licensing of any drug/therapy is an important first step; however, to make an impact, the drugs must be available, accessible and affordable to those in need. A year into the Covid-19 vaccine rollout has taught us that licensing and even large-scale production can still mean inequity in availability between high and low-income countries and rich and poor. The good part is that unlike the Covid-19 vaccines, the developers of Molnupiravir and Paxlovid have agreed to share patents with the Geneva-based, UN-backed Medicine Patent Pool (MPP), which will authorise restrictive voluntary licensing for manufacturing of the generic formulation. This step will ensure availability of the drugs in nearly 100 countries (around 55 per cent of the global population), which gives hope that access to these drugs could be far more equitable than the vaccines.

India — for its large drugs and vaccines manufacturing capacity — is considered the “pharmacy of the world”. Yet, for much of the first half of 2021, it struggled to supply Covid-19 vaccines to its population. The lessons should be used not to repeat those mistakes in the new Covid-19 drugs. As a key step, approval of the two drugs by India’s drug regulator, Central Drugs Standard Control Organisation, should be expedited. India has a large number of generic drug manufacturers, which should start collaborations and capacity enhancement to produce sufficient quantities of Covid-19 drugs.

The Covid-19 clinical management guidelines, formulated by the Indian government, should be updated and mechanisms put in place to ensure that drugs are not overprescribed. Alongside, every effort must be made to counter the traditional challenge in drug supply in India — hoarding or selling in the black market — which was also seen for existing Covid-19 therapies, particularly in the second wave of pandemic.

The world needs both vaccines and therapies to fight the virus. While we have safe and effective vaccines and many more in the pipeline, it is time the Indian government takes every step to ensure the availability of current Covid-19 therapies and also hike investments in drug research and development, in order to be future-ready.