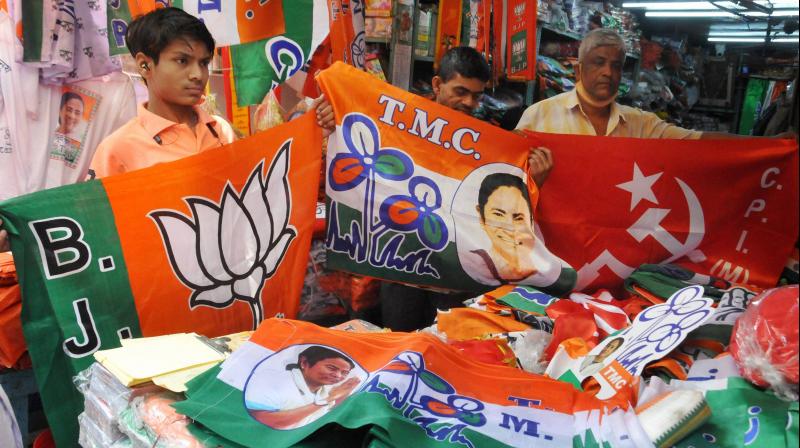 West Bengal has to decide to be its whimsical wayward self or join the gang. (Photo: PTI)

The 2021 West Bengal Assembly elections is more than just a contest between a regional party, the Trinamul Congress, and the challenger, which is a national party, the BJP. It is a battle that may well trigger a limited, yet crucial, domino effect in Indian politics.

The battle for West Bengal which begins on March 27, the first day of the eight-phase election, will be a test like no other. This contest is not a verdict on the performance of the Trinamul Congress government led by Mamata Banerjee over the past 10 years or the prospects of the state under a new untested regime of the BJP.  It is a confrontation between two ideological positions that are fundamental to the future form of India’s polity.

If the Trinamul Congress manages to retain power, then the war for federalism, multi-party democracy and secular politics will get a shot in the arm against the BJP’s vision of a one-nation, one-identity, one nation-one party model or, as Prime Minister Narendra Modi explains it at every one of the many public meetings he has addressed in West Bengal as another unit of the “double engine sarkar” model. The conquest of this border state for the BJP would significantly strengthen its ideological and popular appeal as the defender of the Hindu majority and its legitimacy to discriminate on the basis of religious identity against the Muslim minority through a process that cancels the status of Muslims as citizens by deploying the Citizenship Amendment Act as an instrument of exclusion.

It will not be an easy election for any of the three blocs that are competing for the voters’ hearts and minds. Because elections are about choosing a party for running a government, ideology and policy matter in equal measure. It boils down to weighing two things -- first, which party will do more or give more to the voter; second, which party can be trusted to keep its election promises. Every voter will decide based on his or her priorities, which is a complex mix of basic needs, aspirations and sentiments.

And then there is the Samyukta Morcha, a combination of the CPI(M)-led Left Front, the Congress and the newly hatched Indian Secular Front headed by a Muslim cleric, Abbasuddin Siddiqui. Put together as a survival and restoration strategy for the Left parties and the Congress, on its performance will depend the fate of the BJP and to an extent the Trinamul Congress.

The first and second phases, on March 27 and April 1, will set the stage as the 60 seats cover constituencies in East and West Midnapore, Jhargram, Purulia, Bankura, West Burdwan and South 24 Parganas districts where the BJP has pinned its hopes of beating the Trinamul Congress. Nandigram, in East Midnapore, is the crucial constituency; Mamata Banerjee is contesting against Suvendu Adhikari, once her blue-eyed boy now with the BJP, and it will be the key to this election. It defines the nature of the contest between the dominant Trinamul Congress and its leader, and the BJP led by Narendra Modi and defectors from the Trinamul Congress.

It will be definitive in another sense; it will give a clue of how the Samyukta Morcha’s appeal, especially that of the CPI(M) and the ISF’s appeal works. Will the CPI(M) cut into the BJP’s vote share by taking back the support it lost in 2019? Will the ISF cut into Trinamul Congress’ Muslim vote share? Any reduction in the BJP’s vote share will make its position, as the main challenger, precarious.

The options for the voter boils down to this -- the Trinamul Congress, which as the party of the incumbent government has a lot to live down, but has a leader who remains the most popular choice as chief minister; the BJP, that does not have a chief ministerial candidate and is banking on the Narendra Modi mystique to hoist it to power and then install a face to lead the government, should it succeed in winning; or, the newly formed Samyukta Morcha, which is in the running as the alternative, if not to the party in power then as the alternative to the party in the Opposition.

This is also a fight between Mamata Banerjee and the rest. Can she be dislodged from her position of dominating the political landscape of West Bengal? Her campaign slogan “Bangla nijer meyeke chai”, that is, Bengal wants it own daughter, underlines the centrality of Mamata Banerjee.

The BJP’s campaign has swung between “Ashol Poriborton”, or real change, which is a makeover of the Trinamul Congress’ 2011 slogan calling for “poriborton”, “Sonar Bangla”, that is restoration of Bengal to an imaginary unspecified golden age, and “Aar Noy Anyay”, that is “no more oppression, wrongdoing, abuse, violation and a host of grievances”, as it tests the public response and calibrates its appeal. By projecting itself as the only party in West Bengal which does not have legacy issues, since it was a nonentity till the 2016 Assembly elections and zoomed to principal challenger position after the 2019 Lok Sabha elections winning 18 seats out of the state’s 42, the BJP has crafted a narrative of being a newly minted choice. For the BJP, West Bengal is like the final frontier; it has positioned itself as defending the nation from being overrun by Muslims crossing over as illegal immigrants, of bringing the periphery into the centre by imprinting Hindutva trademarks on the wayward margin through adoption of “Jai Shri Ram” as a unifier and the Ganga Arti as a sacred practice.

The CPI(M)’s campaign does not have a single defining slogan; instead it has updated its appeal by delivering its messages in the language of urban young adult voters, selling itself through reusing a mix of advertising slogans in Hindi, flash mobs and songs that are a takeoff on popular lyrics.

Inserting itself in between the spaces separating the parties in the fray, a platform has emerged that has one unequivocal message -- “No Vote to BJP”. It is an appeal for tactical choices in every constituency to keep the saffron tide at bay. It’s also a call to Bengali voters to use their choice to shut out the “principal enemy”, even if it means voting to bring back the Trinamul Congress for a third term.

West Bengal has to decide to be its whimsical wayward self or join the gang.