Although both adversaries accomplished their immediate political goals, the fragile peace can collapse any moment 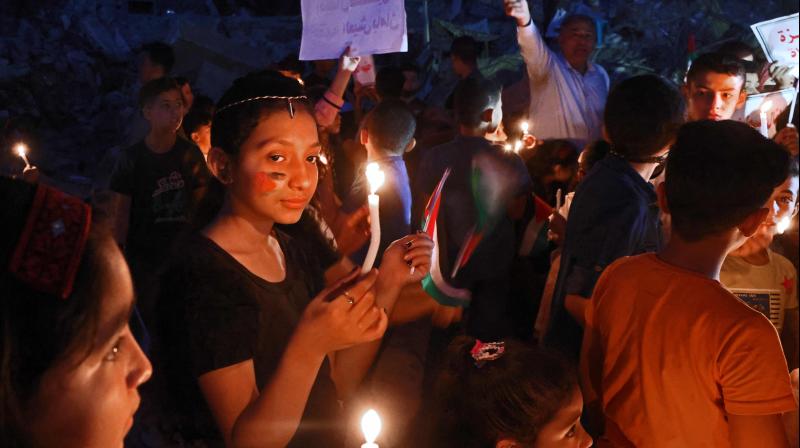 Palestinian children hold candles during a rally amid the ruins of houses destroyed by Israeli strikes, in Gaza City on May 24, 2021. (Mohammed ABED / AFP)

America’s President Joe Biden did well to stress that while the United States remains committed to Israel’s security, only the promised two-state formula can really solve the Arab-Israeli conflict in the long run. That might atone to some extent for what Arabs call the “Nakba”, or literally “disaster”, in which the Zionists destroyed over 600 Palestinian villages and forced their inhabitants into exile.

Nothing is to be gained by fawning on Israel’s Prime Minister Benjamin Netanyahu, as Prime Minister Narendra Modi tends to do. History, once written, cannot be erased, as I told the last Arab mayor of Jerusalem when he claimed that Israel was doomed because even the Crusaders’ kingdom did not last more than 80 years. In fact, Mr Biden would have done even better to emphasise that there can be no more effective guarantee of Israel’s security than a sovereign Palestinian state as envisaged in the 1991 Madrid Conference.

The ceasefire between Israel and the radical Hamas movement, which rules the Gaza Strip, ended 11 days of bitter fighting that killed about 250 people, mostly Palestinian civilians. Although both adversaries accomplished their immediate political goals, the fragile peace can collapse any moment. It is in their interest, therefore, as well as of the entire Middle Eastern region and the world at large to take advantage of this respite from violence to lay the foundations of a lasting settlement.

Such plain-speaking would certainly have denied the US President the thanks that Mr Netanyahu tweeted to some 25 governments, but would have ensured some respect for American diplomacy. India is not of course among the 25 recipients, but it would be a mistake to gloat over the seemingly fulsome thanks of Israeli and Palestinian diplomats for the speech by India’s United Nations representative, T.S. Tirumurti, at the Security Council debate.

All that their praise meant was that South Block once again passed off opportunism as diplomacy, a skill India’s leaders have raised to an art form during the long years of nonalignment, which the Americans called “neutralism”. New Delhi was at pains then to claim equidistance from Washington and Moscow.

Not that India, with limited resources and the geopolitical handicap of location, could have taken a lead role even if it had wanted to. An impoverished and grossly overpopulated Third World nation at odds with its western and northern neighbours, struggling desperately to battle the second wave of the Covid-19 pandemic, should not even pretend to global authority. Even before events reduced his stature, Mr Modi was no Jawaharlal Nehru to be listened to when he spoke on global matters. Nothing in his background or career indicated any grasp of international affairs. Moreover, his bombastic style — demanding applause for saving “humanity from a big disaster by containing the coronavirus effectively” — hardly commands respect.

India’s rulers have always taken an ad hoc attitude to Israel. Only Jawaharlal Nehru’s disgust with Egypt’s King Farouk, then heading the Arab League, prompted him to recognise Israel almost as tit for tat. Morarji Desai probably wanted to develop closer ties but dared not. P.V. Narasimha Rao finally did so under American influence. India wanted Israeli weapons but would not admit it. Israeli diplomats contemptuously attributed India’s pro-Arab stance to the Muslim vote at home.

Not that American policy was or is any more principled. When President Harry S. Truman reneged on Franklin D. Roosevelt’s commitment to the Arabs, his frank excuse was that his supporters included influential American Jews who were anxious for the success of the Zionist state. He did not have to placate a similar Palestinian lobby.

Such calculations also operate in West Asia. In the lead-up to Hamas’ rocket barrage, Prime Minister Netanyahu pursued a series of flagrantly reckless policies. Many believe that he deliberately provoked Hamas in order to prevent his domestic opponents from uniting against him and establishing a governing coalition. Israel has had four elections in the last two years, and if the Prime Minister fails to hold on to power, he might have to face corruption charges and a prison term. Yet, the war that he unleashed was more of a gift to Hamas than he bargained for. Hamas, too, needed a crisis to compensate for its declining reputation in the Gaza Strip, alienation from the Palestinian Authority under President Mahmoud Abbas, and the political confinement imposed by 14 years of the land, air, and sea blockade imposed by Israel and Egypt. Systematically weakened and humiliated by Israel, President Abbas could do nothing about the unlawful eviction of Palestinians from the Sheikh Jarrah neighbourhood of East Jerusalem or the Israeli military’s attack on the Al-Aqsa mosque, which precipitated the conflict. Hamas exploited the two incidents as well as the leadership vacuum, in the process neutralising the blockade by demonstrating that it would not stand by while Palestinians suffered aggression.

For once Israel’s armed forces found themselves simultaneously engaged in Gaza, East Jerusalem, the occupied West Bank and — what probably worries Mr Netanyahu the most —  in Israel’s ethnically “mixed cities”. The Israeli police stood by as well-organised Jewish militias attacked the Palestinians who retaliated against Jews and their synagogues. Not only did the violence revive painful memories of the killing of 13 Palestinian protesters in October 2000, it also intensified the community’s sense of disenfranchisement and discrimination that goes back to the Deir Yassin massacre of the Palestinians on April 9, 1948.

A mere ceasefire cannot address deep-seated grievances that are rooted in history. But atonement can be made for some evils of the past. Israel’s withdrawal to the borders that it enjoyed in 1967 and independence for the West Bank and Gaza, as specified in the Oslo accords, might achieve that. The United States can help to ensure that it happens. But instead of the Palestinians promising to respect Israel’s security, it’s the Israelis who must now undertake not to seize any more Palestinian territory or indulge in any other hostilities against the Palestinian state.