Blind or not, Indians appear supinely negligent to the Chinese threat 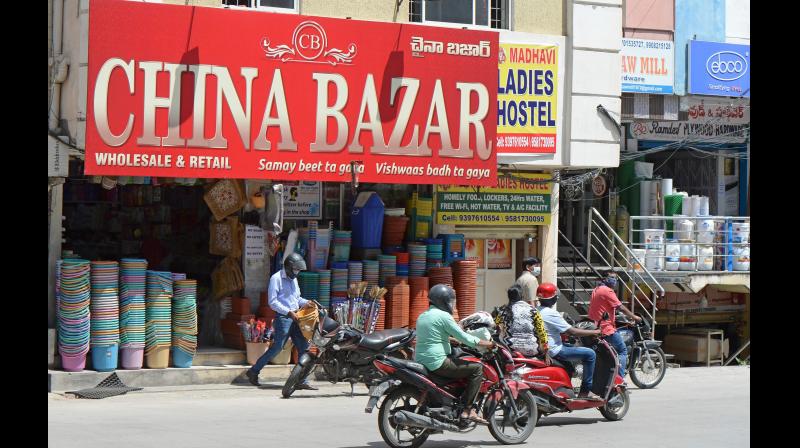 Clearly, the various “bans” and other edicts by the Indian government to keep out Chinese-made products in the aftermath of the Galwan attack in June 2020 had no practical effect in the marketplace. Representational Image.

In India, public memory is of course notoriously short -- for nothing else can explain how the people of this country remain so indifferent towards the chronic hostility of the Communist Party of China (CPC) towards our land and its people -- much more so perhaps than even Pakistan, against whom Indians are at most times up in arms. Why do we look at China as if we were the “Blind Men of Hindoostan”, as the late Gen. Krishnaswami Sundarji, one of this country’s most distinguished soldier scholars who rose to be Army Chief in the 1980s, had once put it.

Blind or not, Indians appear supinely negligent to the Chinese threat and the possible existential damage to the nation’s financial and economic foundations, along with irretrievable loss of territory to Pakistan in 1947-48 and thereafter to the Chinese, making its recovery an impossibility. Clearly, neither Pakistan nor China takes India’s claim over its lost land seriously. It’s because India returned its own claimed land after the 1965 and 1971 wars. Is it any surprise that the Chinese PLA has dug in and will not budge from its newly grabbed positions since May-June 2020, and won’t go back to the pre-April 30, 2020 status quo in Ladakh-Tibet, despite several rounds of military/diplomatic talks. To make things worse, despite the loss of Indian territory (which it won’t admit), New Delhi still lets the Dragon make money from the Indian market through questionable investments, strategic infra penetration and dismantled indigenous industry. The Communist Party of China, under Emperor Xi Jinping, has pretty accurately sized up the Indian psyche and worked out how to turn it to the Hans’ advantage.

In the nineteenth and early twentieth centuries, the Chinese had suffered greatly at the hands of the “Western imperial devils”, but in the twenty-first century it’s the Dragon that is getting rich dumping low-quality, sub-standard industrial goods and consumer products -- and in this pandemic era even medical devices and equipment -- on India’s traders and marketplaces, cashing in on their prices being much cheaper than better-quality Western products or Indian ones. When this columnist went to the local market recently in search of a small thermometer, and insisted on an India-made product, the shopkeeper handed over one that cost Rs 140 and with the assurance that it was Indian. That of course was not true. On closer examination back home, a label inside the device showed that it was “made in China”, from “Wuxi, Jiangsu”, and another label indicated it was sold by a company in Vishnu Garden, New Delhi, and imported in November 2020. Clearly, the various “bans” and other edicts by the Indian government to keep out Chinese-made products in the aftermath of the Galwan attack in June 2020 had no practical effect in the marketplace.

This also raises the more serious question -- are Indian manufacturers so incapable that they cannot produce a device as simple as a thermometer and sell it at a competitive price to Indian buyers? After all, the only reason that Indian consumers buy such Chinese-made items is that they come at a cheaper price. Isn’t it time for the commerce ministry to again draw up a list of essential and non-essential items for import, as was the case in most of the last century?

Let’s turn to another issue on which Indians are getting short-changed. China is at present not allowing the entry of Indian nationals into China on the grounds that this would lead to the spread of the Covid-19 virus in China. This for a virus that had its origin at Wuhan in China, from where it was spread all around the world. If the Chinese had nothing to hide on that count, why are they refusing to allow the virus-origin investigators of the World Health Organisation entering their country? In any case, if the Chinese aren’t allowing the entry of Indians, why are thousands of Chinese nationals freely allowed to enter India. Shouldn’t the external affairs ministry insist on reciprocity, and cancel all visas for the Chinese to enter India till travel is allowed the other way too? Thousands of Indian students enrolled at universities in China, pursuing courses in medicine among other subjects, are now stuck at home, unable to go back, and yet aren’t being refunded the steep fees they were charged. This is akin to highway robbery! Should not the Indian government come to their aid?

We need to remember, however, that it’s not just for business and trade that the Chinese are coming in large numbers to this country. Just one case will suffice as an example of the mischief that the Hans are up to. A 36-year-old PLA-trained spy, Han Junwei, from Hebei province, was caught on June 10 this year at the India-Bangladesh border, joining a long list of Chinese criminals operating within India. Han reportedly knows both Dhaka and Kolkata like the back of his hand and has some familiarity with Naxalite networks. Also recently, a group of Bangladeshi JMB terrorists were caught in West Bengal. A thorough probe into their links with PLA spy Han and the Chinese networks is urgently needed. Just imagine what the reaction in China would have been if an Indian was caught in a similar situation. Would the media there have taken it as lightly and stayed largely quiet as we seem to do? New Delhi needs to end its state of slumber swiftly and wake up to a very real and growing threat to our national security.