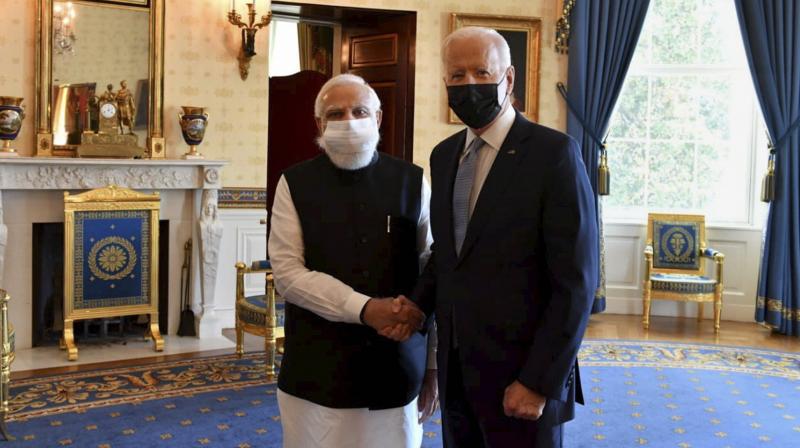 Let the details of the events pegged to Prime Minister Narendra Modi’s visit to the United States – in Washington and New York -- and the frenetic diplomacy on the margins of the UN General Assembly session emerge in clear relief before objections are raised by scantily informed punditry. Meanwhile, let us keep our gaze where we can see.

What could possibly be common between the Taliban brandishing their weapons in Kabul and the Palestinians twirling their spoons (yes, tea spoons) with a flourish? Well, the latter were celebrating because six Palestinian prisoners had pulled off a seemingly impossible escape from the high security Gilboa prison in northern Israel. Clearly a huge embarrassment for a state which flaunts national security as a marketable commodity. The spoon has become an emblem because the six had used it as an implement to dig a hole in the toilet attached to their cell.

The prisoners, according to the Israeli authorities, were affiliated with the Palestinian Islamic Jihad. According to the Times of Israel, the leader of the group, Zakaria Zubeidi, was “a former commander in Fatah’s Al-Aqsa Martyrs Brigade”. That Zubeidi and three others (at the time of writing) have been arrested is a separate chapter. Kabul and Gilboa establish without any shadow of a doubt a reality that is all too common in history -- the limits to power.

Massive intelligence failure attended both the events. True, a jailbreak simply cannot be compared with the reconquest of a country, but that is not the way the Palestinians see it. The Times of Israel reports: “The escape is considered a highly symbolic success for the terror groups. It is being celebrated with ‘euphoria’ among the Palestinians.”

The Taliban, likewise, in the initial flush of victory, are folk heroes in Afghanistan and beyond, having done a David on Goliath. But a pall is settling on their theatre of action. To bring out the irony in sharp focus on the American debacle in Afghanistan, recall the January 29, 2002 State of the Union address by then President George W. Bush. Mr Bush had sketched in bold colours the “Axis of Evil”. Ironies upon ironies attend that speech. Mr Bush welcomed Hamid Karzai as the “leader of liberated Afghanistan”. Mr Karzai is now under house arrest. Mr Bush gloats: “Terrorists who once occupied Afghanistan now occupy cells at Guantanamo Bay.” There is a disconcerting update on this too. Not only have the Taliban returned to power in Kabul, at least five of those in the new Kabul power structure were released from Guantanamo Bay in 2015.

What does all this portend? Is a phase of imperialism coming full circle? One cannot realistically expect US President Joe Biden to say it in quite that language, but what else does one make of his promise to end “never ending” wars. America’s young people who are now 20 years of age have never seen an “America at peace”. The suicide rates among US military veterans is as high as 18 per day? Mr Biden clearly abhors this data.

The problem, of course, is that Mr Biden is only the President, not the system. Even so, he is proceeding with some sense of the consensus he has forged around him. For him to declassify the secret FBI report which reveals the connection of Saudi nationals to the 9/11 attacks indicates a sharp departure from past practice.

And now even military protection is being withdrawn. In recent weeks the US removed its most advanced missile defence system, as well as the Patriot batteries, from the Kingdom which faces attacks from, say, the Houthis in Yemen. Troop reductions from Iraq, Kuwait and Jordan have also been confirmed by the Pentagon. The US departure from Afghanistan will remain vivid in our minds for years. Despite these stories, every American strategist will tell you that “the Middle East is not being abandoned”. There is that “over the horizon” capability which includes updated drones. British Prime Minister Boris Johnson calls it the “outside-in” ability. Let us hope that India’s northwest is not going to be a launching pad.

Israel, which is busy adjusting to the limits on its power as a concept, must place in its calculus the US move to distance itself from the Arab theatre. Yes, support for Israel in the United States remains durable – the Jewish control of banks, the media, institutes of learning, elections, finance. What is not so well known is what Noam Chomsky describes as much the most powerful support for Israel -- Christian Zionism. Former Israeli ambassador in the US Ron Dermer has urged Israel to prioritise maintaining its support of the American evangelical Christians. It must be assiduously wooed. “People must understand that the backbone of support for Israel in the US is the evangelical Christian,” he said.

The US thinning out from the region will accentuate popular perceptions of Israel’s exclusive support base inside the United States. As Israel rolls its eyes around to size up the neighbourhood for subtle adjustments, it will find, to its chagrin, Iran undiminished. The Houthis in Yemen, Hashd al Shaabi in Iraq, Hezbollah in Lebanon, groups supportive of President Bashar al-Assad in Syria and increasing reports of an Iranian role in Afghanistan, initiated by the late Quds commander, Qasem Soleimani. All of these enhance Iran’s position in the region. The cookie in Afghanistan having crumbled the way it has, Iran’s role in this theatre may in the future be of interest to the United States.

The launch of AUKUS (Australia, UK and US) -- an idea borrowed conceptually from ANZUS (Australia, New Zealand and US) against the Soviet Union -- shows the urgency Mr Biden accords to what former President Barack Obama called “pivot to Asia”, meaning the focus on China. The pivot was of much greater saliency. West Asia, though still important, had placed a disproportionate demand on Washington’s attention. The nuclear deal of 2015 conferred on Tehran the kind of legitimacy that was to have enabled it to balance power in the region. This would be in concert with Saudi Arabia, Israel, Egypt and Turkey. The regional balance of power would then require less day to day attention, freeing Washington to pay greater attention to the pivot. That continues to be the route on Mr Biden’s GPS.