Electing Bolsonaro is a self-goal for Brazil

Brazil, by far the biggest country in South America, is the world’s fourth largest democracy. 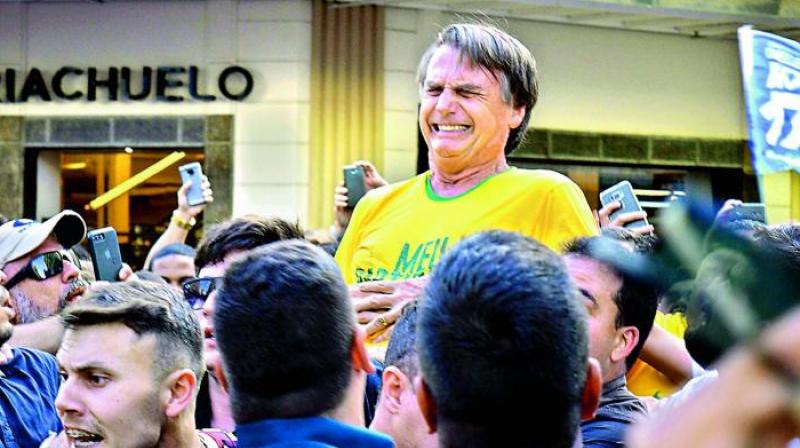 Next Sunday’s second round of the presidential election in Brazil is more or less guaranteed to ensconce in power an extraordinarily odious figure from the far right.

Brazil, by far the biggest country in South America, is the world’s fourth largest democracy. There is a serious risk that it may not much longer qualify for that status, given Jair Bolsonaro’s unequivocal adoration for military dictatorship. But for the moment at least, votes do count, and he appears destined to grab most of them.

In fact, he came close to winning outright in the first round earlier this month, when more than 46 per cent of the ballots were cast in his favour. Fernando Haddad of the Workers Party (PT) came a distant second on 29 per cent.

Bolsonaro’s openly expressed views frame him as a misogynist, a homophobe and a racist; he is an inveterate foe of environmentalism and is inclined to encourage deforestation of the Amazon; he is keen to put a gun in every household; and he has veered sharply towards neoliberal economics, with his Chicago-school adviser holding out the prospect of entirely privatising Brazil’s public sector. Inevitably, the nation’s industrial elite has rallied to his cause.

None of that satisfactorily explains his popular appeal. Among those willing to vote for him, there are many who decry his rhetoric but are counting on his worst instincts being constrained by the reality of power. They shouldn’t hold their breath.

There are obvious parallels with Donald Trump, but whereas America’s system of checks and balances may be inadequate, at least it functions. Little hope on that front can be held out for Brazil, which began transforming into a democracy only in the 1980s, following two decades of brutal military rule under a succession of US-backed generals whose iron fist extended from the domestic milieu to collaboration with like-minded regimes throughout the continent, not least Chile under Augusto Pinochet.

The 1964 military coup in Chile was directed against a President perceived by the far right as being too far to the left. The ascendancy four decades later of the PT’s Luiz Inácio Lula da Silva must have felt like a resounding slap across the face to those who idealised the fascist past — including Bolsanaro, a former Army captain who left the Army under a cloud but was until recently a figure of ridicule on the far-right fringes of the Brazilian political spectrum.

Although Lula was appropriately considered a part of the pink tide that began sweeping across Latin America in the wake of Hugo Chavez’s ascension to power in Venezuela, his reformism was fairly mild in comparison with Chavez’s initiatives, earning Lula the disdain of the left-wing intelligentsia. All the same, he broadly pursued redistributive goals that assisted those most in need. And when he handed over to his successor, the PT’s Dilma Rousseff, after completing the constitutionally allowed two terms, his approval rating stood at an unprecedented 84 per cent — a figure that prompted envious amazement from Barack Obama.

After Rousseff was impeached in 2016 on the basis of budgetary technicalities rather than any personal corruption (when Bolsanaro spoke in Parliament on the motion, he dedicated his speech to the most infamous of the military regime’s torturers, whose victims had included Rousseff), the still popular Lula re-emerged as a possible presidential candidate, and opinion polls suggested he would win easily.

He was denied that opportunity after corruption charges led to his imprisonment earlier this year. The veracity of the charges — the main one being that he received a free apartment in return for favours to a construction firm, hardly in the same league as the revelations of the Panama Papers — remains to be determined beyond reasonable doubt. Once the courts disqualified Lula as a candidate, the PT put forward his running mate, former São Paulo mayor Fernando Haddad.

It is not hard to understand why voters might be reluctant to transfer their enthusiasm from Lula to Haddad, who lacks the former’s charisma and record. It is more difficult to grasp the appeal of a proto-fascist whose ascendancy may well consign Brazil to the same international category as the Philippines under Rodrigo Duterte.

There are, of course, several other parallels, as Bolsonaro backer Stephen Bannon — formerly of the Trump White House and Breitbart Media, who has lately been devoting most of his energies to promoting the resurrection of fascism in Europe — well knows.

Perhaps the more pertinent question is why the majority of Brazilians are willing, in their desperation to be rid of criminal violence and long-standing political corruption, to endorse a figure who panders to the worst instincts in human nature.

Of course, they are not the first voters to have been persuaded to go down this road, and sadly they won’t be the last. But there will be no dearth of opportunities for profound regret in the years ahead.