On August 7, 2020, the SII, the country’s largest private vaccine manufacturer, signed an agreement with the global vaccine alliance GAVI 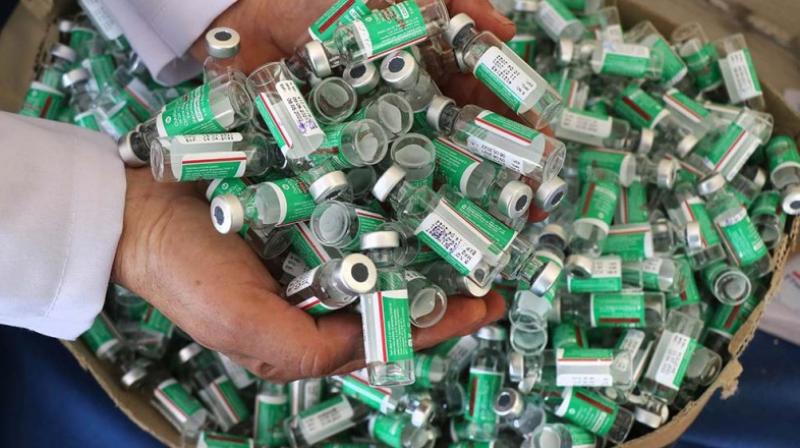 Till February 2021, India had ordered only 11 crore doses while it required 200 crore doses for the eligible population, or 270 crore doses for all Indians, including those under 14, assuming there was no wastage. Representational Image. (PTI)

India has administered one billion, or 100 crore, doses of the Covid-19 vaccines, and this is a fine achievement. Where did these 100 crore doses come from and what was the role of the Indian government in procuring them? This needs to be properly understood.

On August 7, 2020, the Serum Institute of India (SII), the country’s largest private vaccine manufacturer, signed an agreement with the global vaccine alliance GAVI and the Bill and Melinda Gates Foundation to supply vaccines to 92 poor countries by the first half of 2021. The total number of vaccines the SII would produce in 2021 of Covishield, that is a version of the Oxford AstraZeneca vaccine first developed in Britain, would be 100 crores (or 1 billion) doses. This would be distributed among the 92 nations with a total population of four billion.

The alliance said that: “A founding principle of Covax (Covid Vaccine Global Access) is that the access will be equitable. That doesn’t just mean ensuring that all countries get fair access to Covid-19 vaccines, it also means having an allocation mechanism, driven by the World Health Organisation (WHO), to guide how vaccines are distributed within countries and territories.” The GAVI alliance would also sell the vaccine produced by SII to rich nations, and use that money given upfront to ramp up production in India.

On September 26, 2020, Prime Minister Narendra Modi told the United Nations General Assembly that India would deliver vaccines to the world: “As the largest manufacturer of vaccines in the world, I want to assure the world that India’s vaccine production and delivery capacity will be put to help pull out all of humanity from this calamity. India would also help other nations with cold chain and storage facilities.” After this speech the media called Mr Modi the world’s “Vaccine Guru”.

By September 30, 2020, SII had been given $300 million (a little more than Rs 2,500 crore) by GAVI to set up the infrastructure to deliver these doses. The same week, SII’s owner, Adar Poonawalla, tweeted to Prime Minister Modi: “Quick question; will the Government of India have Rs 80,000 crore available, over the next one year? Because that’s what @MoHFW_INDIA (the health ministry) needs, to buy and distribute the vaccine to everyone in India. This is the next concerning challenge we need to tackle. @PMOIndia”. He then added: “I ask this question, because we need to plan and guide, vaccine manufacturers both in India and overseas to service the needs of our country in terms of procurement and distribution.” If India wanted to vaccinate its entire population in 2021, it would need to procure the vaccines from somewhere. The government did not do anything.

Till February 2021, India had ordered only 11 crore doses while it required 200 crore doses for the eligible population, or 270 crore doses for all Indians, including those under 14, assuming there was no wastage. Compare India’s 11 crore to the numbers ordered and paid for by Canada (33 crore), the US (120 crore), UK (45 crore), Brazil (23 crore), African Union (67 crore), Indonesia (19 crore) and the European Union (180 crore). India ordered fewer doses than even Australia (12 crore), which has a population smaller than India’s National Capital Region. At the end of March 2021, as the second wave began, India unofficially blocked SII from exporting vaccines to GAVI that had already been paid for, and grabbed them. Soon after, SII owner Adar Poonawalla fled to London because of threats from India’s “most powerful” people.

In May, the Wall Street Journal summed it up: “Most of the world’s poorest nations were left highly dependent on a single vaccine, produced by a single manufacturer in a single country. In a cruel twist, that supplier — the Serum Institute of India — ended up engulfed by the world’s worst Covid-19 outbreak.” Because of this, GAVI, which had already paid upfront for the vaccines, did not get its deliveries. In a letter to 92 developing nations, GAVI’s head wrote: “Dear Participant, we regret to inform you that, given the heightened Covid-19 crisis in India, Covax no longer expects deliveries …” When asked whether the strategy to depend on India was flawed, he said: “We hear a lot of criticism, and the truth is, we’ve tried to do something that we think is the right thing. Hindsight’s 20:20.

Should we have not invested in India? Well, that was the fastest way to get there.” Not only was it not the fastest way, it turned out to have sabotaged the global fight because of the mess India was in by April. SII was due to ship 14 crore doses by this time but was stopped by the government after it had sent fewer than two crore. Far from being the Vaccine Guru and saving the world, India disrupted what others had planned for, paid for and organised. This month, the government said it would now allow SII to resume exports.

This is then the story of the 100 crore vaccines. We should be relieved that we got the doses but we must also know where they came from and who was and who was not responsible for this achievement.