For terrorists, there is never a need for penetration of the coastline or borders if reliable sleeper agents exist. 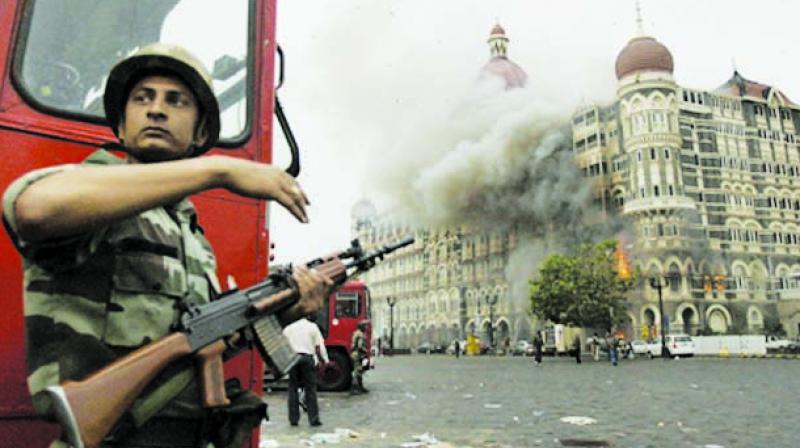 The Taj Mahal Palace Hotel was one of the buidlings targeted on 26/11.

For the Pakistan-based terrorists and their sponsors, 26/11 succeeded in all the defined elements of what a terrorist act is meant to achieve. It created anguish and turbulence in the target territory, effected out-of-proportion casualties, rocked the local and international community, caused a major response dilemma for the victim state and gave much publicity about the terrorist capability to hit at will: India’s financial capital and symbol of good life was brought to its knees and permanent scars left on the psyche of its people. It was truly India’s 9/11. But soon afterwards, like America after 9/11, India too got its act together on homeland security. It’s a credit not often given by Indian analysts. After 26/11, mass casualty terror attacks in Indian cities have been rarer, many have been prevented, although efforts by terror groups to target us have been rife. If anyone can claim credit for that, it is our intelligence agencies, who have found some “method in the madness” in the high-risk game of intelligence gathering and foiling attacks. So while Pakistan refuses to change its stance on supporting terror and people get worried by nascent signs of revival of terrorism in Punjab, how secure is India 10 years after the event that caused collective anguish to all Indians?

We must remember a truism about terrorism. A determined set of terrorists hell-bent on self-destruction and causing the maximum mayhem can defeat the strongest protective systems. Whatever the State’s security set-up does to prevent or deter a terror act, the reality is that it also focuses on how to ensure damage control, to minimise the effect and respond adequately. With time, international borders have become far more permeable for the movement of human resources and war-making material, while modern networks enable effective command and control, finances and communication; all ingredients for an effective terror act. The movement of 40,000 trans-national fighters to join the Islamic State (ISIS, also known as Daesh) is a case in point.

The appointment of a prime ministerial special envoy on counter-terrorism has helped coordinate internationally and ensure a better understanding of the threats at the strategic level. India’s long borders and coastline adjoin 10 or more countries. Therefore, the complete sealing of illegal movements is unrealistic. The LTTE could effectively fight as a terror movement in an island state while getting much of its logistics from overseas, reinforcing this argument. However, what is difficult for terror groups to achieve is the coordination to execute the act, mostly requiring recce, safe houses, finances, transportation and communication. 26/11 proved that modern technology and an element of innovative risk can give the terrorists an even chance. The 10-man Lashkar-e-Tayyaba squad braved the move through the ocean in a dinghy; it struck the same evening, thus offsetting the need for safe houses; effectively used satellite communication; hijacked cabs and other vehicles at will; and there was no need for physical recce, having been briefed profusely on modern digital maps while depending on GPS for navigation to the selected targets. What India has done is to tighten surveillance, although a repeat of the sea route to another significant target through means of deception always remains live. In terms of response mechanisms, we have come a fair distance from the situation where the NSG team from Manesar was stuck in traffic on the national highway near Delhi and delayed in reaching Mumbai on 26/11. The creation of NSG nodes has definitely reduced response time, while the envisaged use of local resources like Army “ghatak platoons” and police commandos offers a means for the initial containment of damage and setting the stage for the NSG to act. However, not too many coordination exercises at the local level are being done to ensure that continuity is maintained in a system where frequent turnover of personnel is common.

For terrorists, there is never a need for penetration of the coastline or borders if reliable sleeper agents exist. To be effective through this front, terror groups have to get the better of police networks — from the beat policeman to the local station house officer (SHO). In India, this appears a weakness with local community involvement and awareness yet to reach the desired level of effectiveness. An alert community, including house-owners, shopkeepers and vendors, can act as a deterrence and also provide quality intelligence inputs through local alarm schemes.

What should worry us as a nation are the continuing divisive acts which alienate one set of people, create hatred and provide a cause for terror groups to exploit. Seething and alienated segments of society are more dangerous than international terrorists, and always open to seeding for larger exploitation by those awaiting such an opportunity. While India may have improved its internal security capability in terms of intelligence and response times, South Asia’s strategic environment doesn’t inspire much confidence. Kashmir continues to fester without full stabilisation anywhere on the horizon. Having overcome the awkwardness of 1980s’ Punjab, we have failed to ensure societal stability allowing one of our most progressive states to be exploited by an adversary through as unconventional a route as narcotics. It has opened a window to trigger the re-emergence of instability. Terror seeks such opportunities and is never in a hurry as investment in societal and social tension is always long-term.

Visiting developed smart cities like Singapore or Paris at two ends of the globe always gives me reason to compare and welcome our security and intelligence communities. With persistent threats, these cities remain vulnerable from the angle of physical security measures. Airports, malls and other key points may have smart surveillance systems but are still vulnerable and inspire in me less confidence than India’s comparatively more visible means of such security. That doesn’t mean India has turned the corner as in the murky world of trans-national terror, the means to predict the nature and location of the next attack remains highly suspect. Counter-terrorism security is always about being ahead in the information loop, but that is seldom possible because mass casualty terror acts are something in which hostile nations and groups always invest sufficient time, resources and patience. The only action a vulnerable nation like India has to take is better societal stability, deterrence, high-quality intelligence, damage control and suitable response.