The politics of beard-keeping demands a book 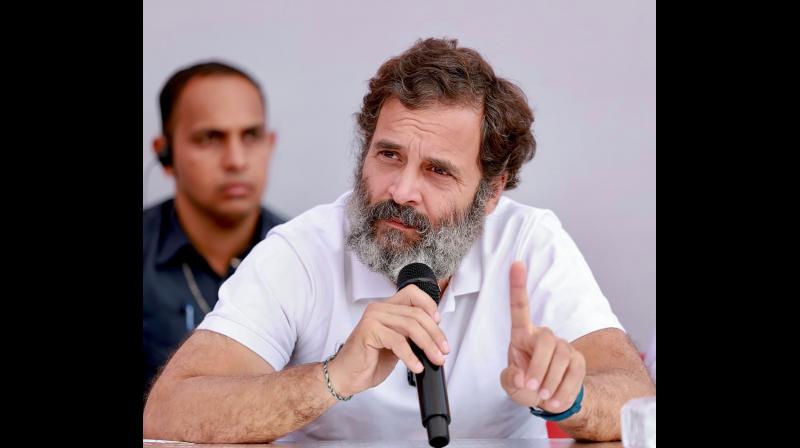 Rahul Baba baiters want to know more about his “weird beard” -- a question only Rahul and his barber can respond to. (Photo: PTI)

It’s Thanksgiving weekend in America, and thousands of overstuffed turkeys are already finite. Americans cheer each year for the one special turkey that doesn’t get roasted and consumed. Which one will Benevolent Biden spare with a presidential pardon? Symbolically speaking, the turkey pardon makes a great photo-op as Americans dig into their own fattened birds and give thanks for all the blessings of the past year. Nobody misses the irony. So many countries around the world want to be that turkey! In Europe, the mood is less euphoric: Winter is coming! And there are zero signs of an economic reprieve. My youngest daughter, Anandita, reports from Italy that most hotels have switched off air-conditioning, citing the Ukraine war and spiralling fuel prices. There’s gloom but so far, no doom. All is not finished just yet. It’s off-season, and the only tourists wandering around Rome, Florence and Venice are Americans, who often confuse Maple with Naples, and ask questions that are so remarkably daft, one wonders about their education. Ignorance or arrogance? I’m opting for the latter. For the Ugly Americans strutting around the square are busy throwing their weight, and dollars, around. The Italians hang on to their fiery tempers and put up with crass remarks because they need those greenbacks! But when, after a whizz-through Roman tour to the Vatican, a local tourist guide was asked “Why would anyone waste so much stone and money building all these monuments?”, the poor man was stumped for a suitable answer, as he laughed uneasily and resorted to a tired cliché (“Rome was not built in a day…”). In a sad aside, he muttered something about North Italy being as “prosperous’’ as Germany.

Closer to home, but still on all things Italian -- Rahul Baba baiters want to know more about his “weird beard” -- a question only Rahul and his barber can respond to. “Why hide such a handsome face?” a lady commented. The politics of beard-keeping demands a book. Cricketers, politicos, smugglers, murderers, movie stars -- all of them make personal statements through the fuzz on their faces. The shape and styling are the key. I remember the reams written on NaMo’s flowing, sage-like beard during the Covid-19 pandemic -- was he keeping a mannat? Or was his regular barber/groomer in lockdown mode? Vicky Kaushal is being urged by fans to grow back his beard, while in Maharashtra, Devendra Fadnavis stands out because he’s one of the few with a smooth chin -- the rest have opted for heavy facial hair, rendering them indistinguishable.

Himanta Biswas Sarma, Assam’s CM, has weighed in with his comments on Rahul Baba’s fuzz: “I just saw his looks have changed… why is your face turning into Saddam Hussein?” Huh? Matlab? Got it! He wants Rahul Baba to be equated with the Iraqi despot. Sarma advised Rahul to resemble “Sardar Vallabhbhai Patel or even Jawaharlal Nehru” instead. He added: “It’s better to look like Gandhiji…” Strange. The next Assam Assembly elections are between March and April 2026. Relax… why go into overdrive over the Opposition’s hirsute choices abhi se? By the time 2026 comes around, a lot could change, beards included.

The other mocking/talking point involves Rahul Baba’s penchant for walking hand-in-hand with assorted female fans during the Bharat Jodo Yatra. Don’t they know? Ciao Bella is a charming Italian greeting for signorinas and signoras of all shapes, sizes and age brackets. Every woman feels chuffed on hearing “Çiao Bella!” Rahul is being gallant. A quality unknown to most netas. Never mind that all this hand-holding and beard-keeping is unlikely to translate into anything of substance. Even a veteran loyalist like Shashidhar Reddy has put in his papers and informed mamacita he’s done with the corruption in the Congress. That is stating the obvious. Tell us something new, Reddyji! He has named names… which is rare. And in a letter to Sonia Gandhi he has lamented the decline of the Congress in Telangana: “It is impossible to believe that money has not been the driving force…” Errrrrr… Is that a revelation? Yawwwwn… Reddy has joined the BJP. I’m sure he has done so with the purest of motives, and is convinced “m,oney is not the driving frorce” in the “saints-only” party. It will be interesting if, during the Gujarat polls (two phases – on December 1 and 5), Rahul Baba is greeted with lusty cries of “Kem Chho…” And he responds: “Majaa ma”.

It’s lovely to watch the political landscape as it dons fall colours… so many dry leaves and useless twigs strewn on the ground, getting trampled under chappals and sneakers. Fair-weather friends brazenly hopping from one party to the next, hoping for a more lucrative tomorrow. Just like cops who ask for postings to specific police stations where the bribing system has been converted into a science. Reddy has grandly stated: “For me, it’s Telangana first right now….” Hello! What was it earlier: Second? Third? Last?

The mausam in Delhi is pretty damn wonderful right now… shawls and knives are both out. So are hacksaws, hammers and nails. After the non-stop, breathless coverage of Nirbhaya’s gruesome gangrape-murder in 2012, which came six years after Noida’s Nithari killings of 11 innocent children and five women, it’s back to grisly reportage of another horrific case, this one involving a 28-year-old killer, Aaftab Amin Poonawalla. At the moment, the cold-blooded murderer who has confessed to chopping up Shraddha Walker, his girlfriend, into 35 pieces, is five steps ahead of the investigators. This is one case that’s going to keep journos engaged and busy for the next few weeks. Just like the Chintan Upadhyay case (2015), which is still baffling agencies. That goes for the Sheena Bora ongoing trial, which is taking a few highly unexpected turns. Prime accused Indrani Mukerjea had amassed jewellery (“ancestral and self-acquired’’) valued at a staggering Rs 25 crores, according to reports. Hefty money transfers of Rs 70 crores have been tracked from bank accounts in New Zealand, India and the UK. But, like the above-mentioned cases -- there is no irrefutable evidence to nail the killers (except for Moninder Singh Pandher’s employee Surinder Koli). Without that, our cops are going to run around like headless chickens in search of ‘’proof’’. No problem. We’re used to justice crawling along at a pace that would give a self-respecting snail a complex. But with Dhananjaya Y. Chandrachud, our dynamic new CJI, taking control, there’s hope for all of us… kanoon in India has just received a booster shot. The pandemic of pending cases is on the wane. Jai ho!