Karan Thapar | Christmas, like Diwali, is a special day in India 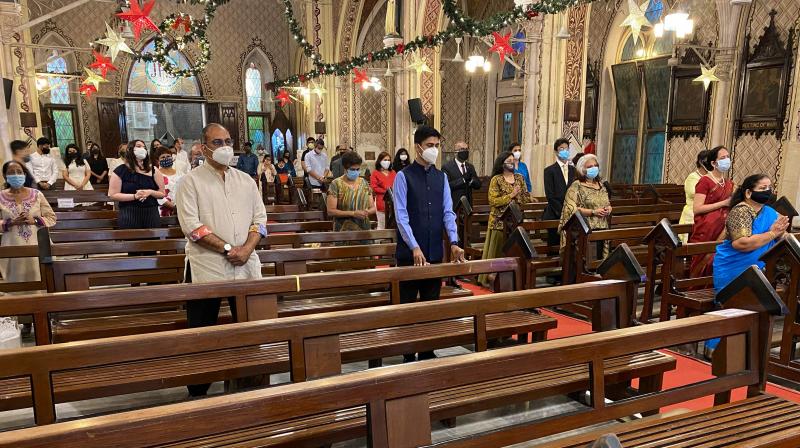 Christian devotees take part in a mass service on the eve of Christmas, in Mumbai on December 24, 2020. (Punit PARANJPE / AFP)

Something I have always been proud of is the fact that India celebrates Diwali, Christmas as well as Id. Regardless of our faith, we keenly anticipate each occasion and participate with enthusiasm. There aren’t many countries that can make a similar boast.

The Gymkhana, Rotary and Lions Clubs across the country hold special Christmas tea parties for their members’ children. There is always a Santa Claus, dressed in red, with a straggly white beard and a discordant ho-ho-ho! Most of us can sing Jingle bells and many can hum Silent Night. And no matter how many they make, our bakeries always run out of Christmas cake. The truth is that Christmas in India may be different but it’s also special. Christmas is as much our festival as it is that of the majority Christian world. Unfortunately, however, the Narendra Modi government neither understands this nor respects it.

If a report put out by the ANI news agency and published by a number of leading newspapers turns out to be correct, “the Bharatiya Janata Party is planning to dedicate December 25, the birth anniversary of former PM Atal Behari Vajpayee, to farmers”. The report suggests that the Prime Minister will make this announcement on Christmas Day itself when he will also speak on the controversial issue of the new farm laws.

Frankly, this would be terrible. It would be reprehensible and deplorable. It amounts to a blatant and unforgiveable breach of India’s valued tradition of respecting every religion. Worst of all, it ignores the fact that Christmas is as important a festival in India as it is for the countries of Europe and America.

Unfortunately, this will not be the first time that the Modi government has denigrated Christmas Day by trying to convert it into something else. Narendra Modi had barely been in power for six months when in December 2014 he decided to designate Christmas as Good Governance Day. That, too, was done in memory of Atal Behari Vajpayee. Because December 25 is Vajpayee’s birthday the Modi government feels it can designate the day in any way it wants. The fact that it is Christmas Day is either secondary or irrelevant.

This logic is not just bizarre, it’s offensive. December 25 is Christmas Day, first and foremost. Vajpayee’s birth on that date was a coincidence. It cannot take priority or prominence over the birth of Jesus Christ. Nor can India’s farmers, who are the purported excuse for the new dedication this year.

If you disagree with me, just ask yourself a simple question -- would Narendra Modi dare to designate Diwali or Holi as Good Governance Day or dedicate it to India’s protesting farmers? Even the thought of it would not occur to him. Why? Because, as a Hindu, he knows too well that this would deeply upset his co-religionists.

Why then as the Prime Minister of a secular country does he feel free to proclaim Christmas as Good Governance Day? Or, as ANI suggests, dedicate December the 25 to India’s farmers? Nothing could hurt our Christian brothers and sisters more. Our Prime Minister should be protecting and defending their emotions and sentiments, not wilfully and repeatedly disregarding them.

In 2014 the Archbishop of Bengaluru publicly questioned why Christmas had been chosen as Good Governance Day. The government’s response was that it happens to be Atal Behari Vajpayee’s birthday. What the government did not address was the obvious next question -- is that a sufficient reason for redesignating the holiest day in the calendar for Christians? The same question will occur again if today is dedicated to India’s farmers. And I’m pretty sure we’ll probably get the same hurtfully dismissive reply.

The irony is that were he alive Atal Behari Vajpayee would be as upset as I am. He would not applaud the government. Instead, he would lacerate it with his stinging criticism. He was, after all, a secular man with great respect for Christians. He would hate to be the excuse for this affront to them. And although I have not checked with her, I do not believe this would please Vajpayee’s daughter Namita either.

Let me make one further point. This year the attempt to redesignate Christmas is likely to be more hurtful to India’s Christians than the 2014 redesignation as Good Governance Day. This is because fear of the virus has already changed the character of this special day. We may not be locked indoors as the British are, but we are equally fearful of congregating in churches or celebrating in large family gatherings. For many Christmas is likely to be spent “home alone”. Redesignating Christmas Day will only increase the sense of loss.

Again, this is something that Mr Modi’s government should readily understand. Diwali was no different for India’s Hindus. The virus ruined it for tens, if not hundreds of millions. But on that occasion the government was only too aware of the need to lift spirits. Why is that not the case now?

I know mine is not a lone lament. Millions -- indeed the vast majority --of my countrymen are likely to echo my concern. For them, the sanctity of a day of God is beyond questioning. Then why are our politicians silent? If I recall correctly, in 2014 I did not hear a clear protest or even criticism from the Congress Party. I suspect this year too its voice will be silent. But why? I really want to know.

If there is a politician in India who understands the importance of Christmas and what it means to Christians, it has to be Sonia Gandhi, who was born a Catholic. Yet she said nothing in 2014 and I fear that could be the case again.

Today, I wait to see if the India I am so proud of is changing for the worse. I so much want to be proven wrong. In fact, I would really like the day to end with readers of this column proclaiming that I was terribly mistaken. This is one occasion when I sincerely want to be totally incorrect… well, we’ll soon know.

Finally, and if it’s not too late, Merry Christmas.