Opinion   Columnists  26 Feb 2021  Farrukh Dhondy | Life on Zoom: You learn a lot about yourself, and others too
Opinion, Columnists

Farrukh Dhondy | Life on Zoom: You learn a lot about yourself, and others too

If Indians had invented the ethereal conversation device and needed an onomatopoeic name for it, they would probably have called it Dhishoom 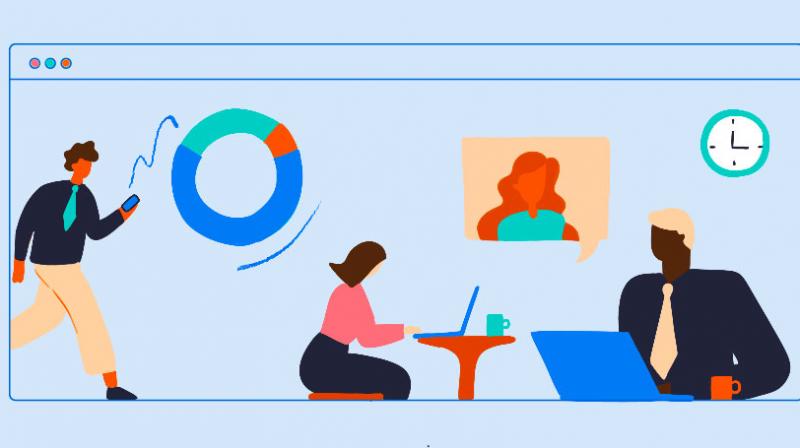 My constant, even daily, use of Zoom has given me several useless insights into human behaviour, perhaps not new ones, but ones that confirm what we do and are. (Representational Image: Twitter: @zoom_us)

To “zoom”, a dictionary will tell you, is to travel fast or rise quickly and perhaps noisily. It must have been, I thought with some irony, that the principal instrument I seem to use to confer with anyone in the lockdowns of the plague year was called Zoom. One goes nowhere.

If it is, as I suspect, not a Chinese but an American device, there was probably no ironic intent in naming it. After all, 74 million Americans don’t care whether a person is a self-obsessed habitual liar, misogynist, racist, fraudster, rabble-rousing insurrectionist, anti-democrat and fantasist, they still want to make him President. Not very high on the irony scale, then.

But one must admit that Americans are good on the onomatopoeic front. It was their popular and renowned form of literature, the comic, which gave us words for violence. I suppose “bang bang” may have preceded Amerigo Vespucci’s discovery of Trumpistan and may have been imported, perhaps from Ireland, but adding “Chitty Chitty” to it was a stroke of genius attributed to the USA. But I digress.

What I meant was that the comics gave us words for fisticuffs such as “sock” and “pow”. Who can’t see in their mind’s eye the spiked splatter of a powerful punch from Superman or Batperson landing on the villain’s skull as this nasty individual tilts away from the vertical? The words inside the spiked bubbles or splashes, giving visual form to the impact of fists, aren’t exactly onomatopoeic, as a punch sounds more like “phut” --but “pow” packs imaginative power.

So, gentle reader, Zoom, as the name of a device by which you connect to anyone (who has an appropriate electronic device, of course) anywhere in the world, may be a word that is supposed to and successfully conveys the speed of contact between stationary persons -- two or a full screen of them.

If Indians had invented the ethereal conversation device and needed an onomatopoeic name for it, they would probably have called it “Dhishoom”, because as far as I know it’s the only sound word that we have invented. It is of course Bollywood for the sound of a gun going off, and there are always two shots fired so it becomes “Dhishoom! Dhishoom!” The precedent is the Western “bang bang” -- because if it’s just the one word, it could merely stand for the slamming of a door. I venture to speculate that we would have called our communication device “Dhishoom” because having invented the word, we use it as the name of a chain of very good British restaurants. That’s not supposed to represent the explosion of your stomach when you eat there.

My constant, even daily, use of Zoom has given me several useless insights into human behaviour, perhaps not new ones, but ones that confirm what we do and are. It has also reinforced my self-consciousness in a not terribly positive way.

You see, Zoom forces you to see yourself as you speak to others and, depending on the strength of echo in your device, you can even hear yourself speak and, like me, be rather surprised at your lamentable accent, the slight lisp you hadn’t noticed before and the stupid fumbles and pauses you thought others made but which your fluency was free of.

And then there’s appearances, of course. Before a Zoom call, I check my hair and brush it this way and that. My creeping baldness (a family inheritance which, as they say, looking on the bright side, allows more space for rude tattoos) and the fact that I haven’t had a haircut since the lockdown began does funny things, in my self-conscious perception, to my appearance. The hair in the centre of my head insists on standing upright, as though I was auditioning for the role of TinTin from the French comics.

I used to despise the self-deceivers who brushed their hair forwards to hide their baldness, but now find myself wondering, comb in hand at the mirror, whether it’s a good strategy. It’s not.

Gentle reader, in my job as a teacher, and then in my short and happy life as an agitator and pamphleteer, I have addressed countless classes, assemblies and audiences. I never began with the old opening: “unaccustomed as I am to public speaking”, but perhaps should have.

Zoom has demonstrated to me that any conceit I cultivate about my ability to present an argument is precisely that. I have now taken a vow during the Christian Lent to begin speaking on Zoom with that precise and modest caveat. Watch that screen!

Zoom gives one an insight into the rooms that your “zoomists” work or speak from. The convention is to have a bookshelf or some dignified piece of art behind you, but that may only be true of the people I associate with or speak to or watch on a televised Zoom. I wonder if others have dirty pictures or washing hanging up behind them as they interlocute.

Tags: zoom calls, farrukh dhondy, life on zoom :you learn a lot about yourself, and others too