By acting in unison, we can cut the chain of transmission and take the sting out of the disease 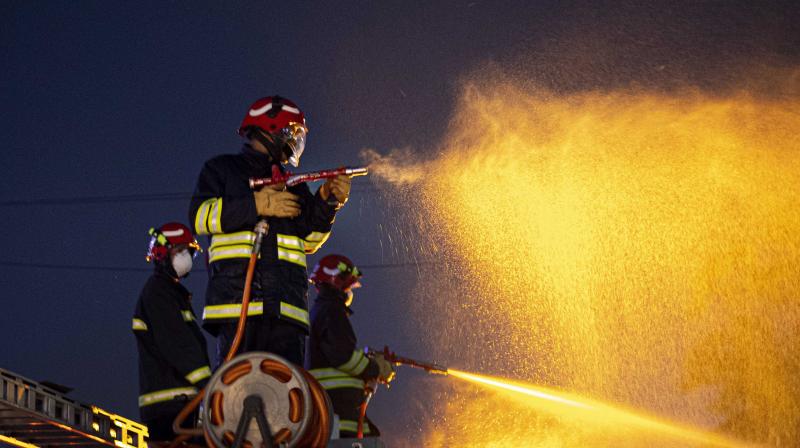 Firefighters spray disinfectant to contain the new coronavirus Covid-19 on a street in Guwahati on March 25, 2020. (AP)

As the number of coronavirus (also called Covid-19) cases rises in India, we’re conjuring up two very different scenarios: one in which India becomes the next epicentre of the outbreak with dreadful consequences of unimaginable proportion; and the second in which India is successfully able to prevent any major outbreak and earn for itself big applause.

Which of two these scenarios will actually unfold depends on how swiftly the country -- which includes the government, the people and establishments -- is able to deal with the emerging situation.

Now that prime minister Narendra Modi has placed the entire country under a three-week lockdown, there is a high chance that we may get away from Covid-19 relatively lightly. Through this lockdown, the government hopes to achieve universal social distancing, which is seen as vital in cutting the chain of disease transmission.

This extreme decision doesn’t appear to be a knee-jerk reaction. Sunday’s 'janata curfew' seems to have been a prelude to preparing the public for the total lockdown, which was in the making as there were some hints to it in Modi’s first public address on the coronavirus Thursday evening.

The lockdown has brought the entire country to a complete standstill. Except for the production, movement/distribution and sale of certain essential goods and services, there is a total ban on all other activities, including on the outdoor movement of people. There are no national or international commercial flights, all passenger trains have halted, and passage of people through immigration checkposts has been discouraged. The government has issued detailed guidelines on strict enforcement of the lockdown.

Undoubtedly, the lockdown will impose short-term hardships on people at large but it’s well worth it. Although the lockdown is for three weeks as of now, one doesn’t really know for how long it will need to last.  We are living in uncertain times.

The novel coronavirus disease has taken the world by storm. Covid-19 is barely three months old and has already infected over 425,000 persons and caused over 19,000 deaths worldwide. While the disease in China (where it started), South Korea and Taiwan has crossed the peak, the infection elsewhere is yet to. We don’t know where the situation may land us.

In the spread of this infection, one surprise element has been the relatively low number of Covid-19 cases and deaths in India thus far: India has reported 606 cases so far, including 13 deaths. Even Iceland, with a population of only 370,000, has reported a higher number of cases!

Experts are divided in their views. Some attribute the low numbers in India to the early introduction of border restrictions (even before any positive case was reported), the imposition of quarantine rules, and active tracing of contacts. Further, the alert and a responsive administration began imposing stricter measures as the situation started to unfold.

However, there are other experts who disagree. They believe the actual number of cases is probably much higher than the reported numbers. The low numbers reported by India may be the result of its testing protocol, which is limiting, and they believe that India will see a surge in cases over the next few days and weeks. In their view, India should be testing many more cases and prepare for the worst.

Indeed, the Indian Council of Medical Research (ICMR), the apex official body involved in biomedical research in the country, has been revising its testing protocols based on the learning that is coming from within the country and other high-risk nations. The ICMR has ramped up testing capacity by activating over 100 government laboratories with the combined capacity to conduct over 10,000 tests a day. Additionally, it has added substantial capacity by designating private labs and fixed a price ceiling for tests conducted in private labs.

Regardless of the difference of opinion, all experts agree on one thing: given India’s fragile healthcare system, disease prevention is its only weapon. A delay in the onset of Covid-19 and its relatively slow progression in the country has given the administration a golden opportunity to not only ramp up its testing capacity but also prepare for any possible outbreak.

The administration has ramped up quarantine facilities and kept isolation wards ready, constituted rapid response teams, deputed additional secretaries/joint secretaries for a coordinated response at the state level, and has not shied away from partnering with the private sector in preparing for any eventuality. As we’ve not had any major outbreak so far, our level of preparedness has not been tested yet.

While the administration at all levels has an important role to play, the role of the public in complying with the lockdown simply can’t be overemphasised. As with the public, so with business establishments. They need to rise above their narrow commercial interests and try to help the country in this hour of need. These are extraordinary times. Now is the time to do charity and philanthropy. And there are a number of ways to do it depending on their line of business.

Almost all experts agree that Covid-19 is yet to peak in India. But no one is quite sure in what form or shape it will do so. It all depends on how seriously we all take the lockdown. By acting in unison, we can cut the chain of transmission and take the sting out of the disease. Together, we can defeat Covid-19, which we must.

But fighting Covid-19 is only one of the battles that lie ahead. Shoring up the Indian economy, badly bruised by Covid-19, is another battle that has to be fought later. This will probably last much longer and require a far more concerted effort together with the rest of the world.