India-Bangladesh relations get impacted by the BJP’s divisive and majoritarian politics, over illegal immigrants and citizenship 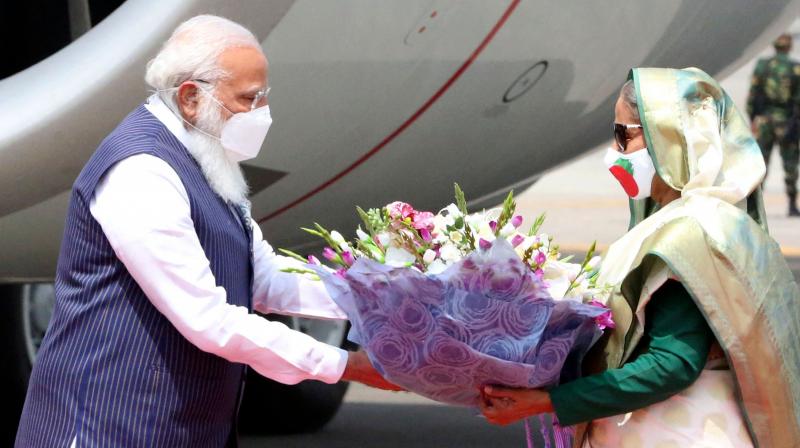 Whether people and voters will see through the BJP’s cynical use of diplomacy for electoral gain or lap it up as realpolitik will be known only on May 2. (Photo: AFP)

After an entire year marred by the Covid-19 pandemic, Indian diplomacy appears to be back in high gear. The “Quad” leadership-level summit of Australia, India, Japan and the United States was hosted by freshly inaugurated US President Joe Biden. It crystallised a fresh paradigm for relations among the democracies of the Indo-Pacific, driven by the China challenge. But India’s attention was drawn by its immediate neighbourhood. And, unsurprisingly, the interplay between diplomacy and domestic politics has commenced.

The de-escalation with Pakistan and the revived ceasefire at the Line of Control has begun the episodic thawing of bilateral relations. The Indus Water Commission met. Pakistan’s Chief of Army Staff Gen. Qamar Javed Bajwa continued to publicly advocate better India-Pakistan relations, albeit simultaneously insisting on the centrality of the Kashmir dispute. The process is still a work in progress. In any case, the BJP’s Pakistan bashing carries no benefit in the Assembly polls now underway. The BJP is fixated on winning West Bengal and retaining Assam. Tamil Nadu is also critical, as the BJP sheltered the politically orphaned AIADMK following founder J. Jayalalithaa’s death. It would want its ally to retain power in a major southern state.

But the interplay between domestic politics and foreign relations can be best traced in India-Sri Lanka and India-Bangladesh relations. Indian Tamil public opinion is sensitive to the ill-treatment of Tamils across the Palk Strait.

Similarly, India-Bangladesh relations get impacted by the BJP’s divisive and majoritarian politics, over illegal immigrants and citizenship, in Assam and West Bengal. While no Prime Minister can afford to put diplomacy on hold while crucial state elections are underway, it is an altogether different matter when the Election Commission announces an election schedule which ties in rather conveniently with BJP’s poll strategy. On the other hand, international developments involving Sri Lanka are working to the BJP’s disadvantage.

Take the case of Bangladesh. The fiftieth anniversary of its liberation fell on March 26, for which Prime Minister Narendra Modi was the chief guest. The leaders of the other Saarc nations were also invited other than those of Pakistan, for obvious reasons, and Afghanistan, perhaps due to its preoccupation with the intra-Afghan talks. But Mr Modi is sharing the main stage with Bangladesh PM Sheikh Hasina. This is to recognise the critical role of Indian military intervention in ejecting the Pakistani Army that had committed genocide to retain control of Pakistan’s eastern wing. India did not then realise that US President Richard Nixon was using Pakistan for his historic opening to China. In fact, as India prepared for war in 1971, after the rainy season, President Nixon’s then national security adviser Henry Kissinger secretly flew to China in July via Pakistan. India, meanwhile, stymied any possible US intervention by signing a 20-year Treaty of Peace, Friendship and Cooperation with the Soviet Union.

In Bangladesh, this weekend, Prime Minister Modi’s programmes have been choreographed to play well in West Bengal as polling begins there on March 27, when he would visit temples, including one at Orakandi, the birthplace of Harichand Thakur, the founder of the Matua sect, numbering 1.8 crore. They may affect the outcome in about 50 Assembly seats, that were critical to the BJP’s success in the 2019 Lok Sabha polls, where it stunned everyone by winning 18 of West Bengal’s 42 seats. It is difficult to believe that the election dates have not been tailored to the PM’s needs. For the golden jubilee celebrations on Day 1, a different point arises. Should not the Prime Minister have gone with an all-party delegation, especially representatives of the Congress, as the 1971 victory was the culmination of a national endeavour led by Prime Minister Indira Gandhi. That way the visit could have been insulated from the charge of gross partisanship and misuse of diplomacy for domestic electoral benefit.

The Bangladesh visit also brings the focus on the controversial Citizenship Amendment Act, that has raised disparate concerns in Assam and West Bengal due to its discriminatory criteria. In Assam, the BJP is downplaying the law as local groups resent the cut-off date getting moved from 1971, as laid down in the Assam Accords, to December 31, 2014. In West Bengal, it is being paraded with enthusiasm as relief to Hindu immigrants who fled Bangladesh, and are a sought-after vote bank, especially the Matua community. In any case, Mr Modi’s visit has provoked right-wing groups ranging from the Opposition BNP and de-registered Jamaat-e-Islami to totally radical groups like the Hefazet-e-Islam and Khilafat-e-Majlis.

Bangladesh PM Sheikh Hasina has been a pillar of moderate Islam, putting down radical elements with a heavy hand. Attacks on Hindu villages are an ongoing issue. In 2017, before her India visit, the BJP’s West Bengal unit held a function where her failure to protect Hindus was decried. She can influence public opinion in West Bengal by a more forthright denunciation or even action during Mr Modi’s visit. This would be a classic case, if it happens, of a foreign role in India’s domestic politics. Prime Minister Modi, of course, has no inhibitions about electioneering from any platform, in India or abroad.

On the other hand, India’s abstention during a vote on a resolution at the UN Human Rights Council on Sri Lankan accountability for human rights abuses against Tamils is resonating in the Tamil Nadu polls. Bangladesh, Pakistan and China opposed the resolution, which seeks “to ensure prompt, thorough and impartial investigation, and if warranted, prosecution of all alleged crimes relating to human rights violations and serious violations of human rights law”. The Tamil National Alliance (TNA), a grouping of Sri Lankan Tamils, hoped before the vote that India would vote for it. India on the other hand had said it would balance the rights of Tamils and territorial integrity of Sri Lanka. This reasoning is flawed as giving closure to Tamils by punishing the guilty would actually begin the healing and open the path to reconciliation. Making it murkier is Sri Lanka suddenly handing a port terminal development project in Colombo to the Adani Group. It could be seen as Sri Lanka balancing Indian and Chinese interests. It could equally be considered as cynical subterfuge by India to not openly offend Sri Lanka by supporting the resolution, knowing it was likely to be passed anyway.

Whether people and voters will see through the BJP’s cynical use of diplomacy for electoral gain or lap it up as realpolitik will be known only on May 2. But national interests suffer when politics and diplomacy are mixed.