UK paid a heavy price for being late on coronavirus response

While parts of India are now being opened up, very tentatively, in the UK there is confusion and debate on how long the lockdown would last 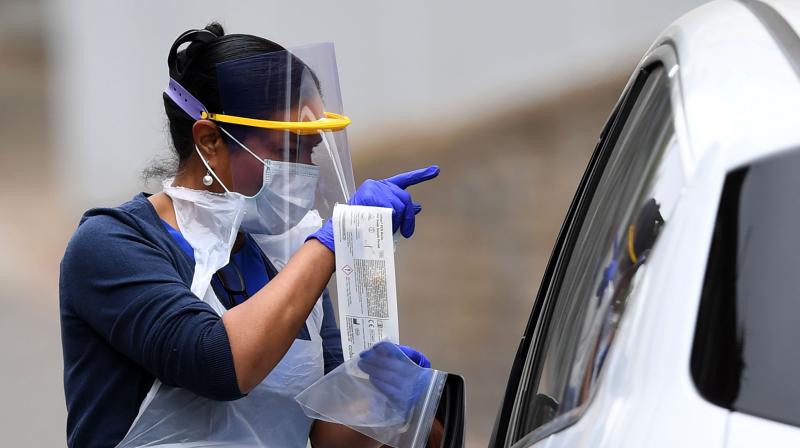 A key worker hands back a swab to a medical worker at a drive-in testing facility for the novel coronavirus COVID-19, in east London. AFP Photo

As the deaths from coronavirus reach 20,000 in the UK, it is a really sad moment for so many. Ironically, this is around the same number of total detected cases in India. The main difference in approach has been that the lockdown was announced in India early enough to slow the spread of the virus, which did not happen in the UK. Being a much smaller country, UK missed a very good chance of saving people’s lives.

While parts of India are now being opened up, very tentatively, in the UK there is still confusion and debate on how long the lockdown would last. One problem is that while people are still dying in large numbers — it is impossible to keep people indoors especially if it’s a sunny day. I think the world has now been divided into two categories: one category comprises of those with white collar jobs in offices, which are still functioning , as well as those who are used to working from the house such as writers (like me ) who are quite content to work from the house — as their work carries on. They are all the “insiders” , who stay at home or inside offices. And the another category is of the large numbers of unemployed workers who either are in the gig economy, or those who work in the high street and pubs etc, which are all shut. They are usually the “outsiders” treating this lockdown like a holiday, and for them it might be safer to be back at work if shops are opened up, because in any case many are not staying in. It will also help generate some business. Some shops have opened, we now await the next steps.

Last Tuesday it was the 94th birthday of the Queen. For the first time it was not celebrated in view of the lockdown. At a time like this,  politicians never command full, unreserved respect. Hence it is easier to look up to the Royal Family. To the delight of his great grand mother, Harry and Meghan beamed their son Archie across online.

Oddly enough, it is the older, endangered species of homo sapiens that people continue to respect. The Queen already has spoken to the nation — with 27 million listening in.

Now even the Duke of Edinburgh, 98, who normally gets in headlines for putting his foot in his mouth, gave a timely tribute to the health workers  and volunteers. Despite being nearly 100, an old soldier Tom Moore has also raised £20 million by walking up and down in front of his house. He wanted to do 100 walks but now will continue till the money stops coming in.

That apart, many are turning more and more into virtual world zombies: with online cocktail parties, home lessons for school children,watching plays streamed by the National Theatre or going through the British Museum galleries. There is no telling whether we will ever look again at a live play except streamed down, or get into community exercise regimes and cooking experiments when it is all over. The air is cleaner and there is no noise. So will we all work from home? Why not?

The story on Boris Johnson gets more and more absurd daily but given that this is Boris it is more believable. We used to criticise David Cameron (remember him?) for being chillaxed. But Boris is super-insouciant, refusing to believe that he cannot solve every problem he faces. He even thought, we learn, that he was immune from any infection that normal people (those who did not go to Eton) may catch. He caused a huge emergency and bagged an ICU for two full days and no doubt denied other patients the attention they needed. Then he has gone off on a long rest cure to his prime ministerial retreat. They may say “We are all in this together” but they do not mean it. As far as Boris is concerned, people are worried that he means “You are all together in this , but count me out.”

The latest excuse is that the government can only follow the science. At the daily press conference ministers take turn to preside flanked by two scientists or health officials. We are shown the same set of graphs each day updated with the expert adding to the confusion about when the lockdown will end. They say Boris comes back from his furlough today! We cannot wait, at least the entertainment value of the daily briefings will shoot up!

Another chapter in Vijay Mallya’s saga was enacted last week. He has lost the case for extradition. He has only been dodging his pursuers for four years. British human rights legislation protects each and every one threatened with a trial anywhere around the world. Now he has one more chance — the Supreme Court. That should take another year or so. While the lockdown lasts he is free and unlocked. It is doubtful that he will go to India before the pandemic ends. And that’s anyone’s guess!