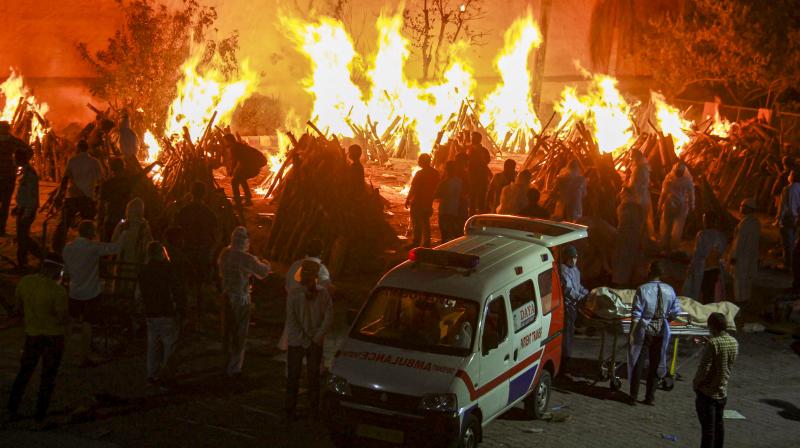 On March 12, US President Joe Biden convened the inaugural summit of the “Quad” countries, comprising Australia, India, Japan and the United States, held in a virtual format. Their joint statement headlined “The Spirit of the Quad” emphasised the combating of Covid-19. In the last paragraph, they committed to combining medical, financing, manufacturing and delivery as well as development capabilities to address the “historic crisis”. India was seen as the hub of vaccine manufacture and the vanguard in this battle.

Covid-19’s second wave hit India soon afterwards, with India’s leadership preoccupied with crucial state elections, the Kumbh Mela and cricket. The mutant virus had begun wreaking havoc in Britain. Unmindful of this, India was exporting AstraZeneca (Covishield) vaccines to friendly developing countries and fulfilling its Covax commitments. The cases began spiking, first in Maharashtra and Punjab, and finally in the nation’s capital, Delhi. Two virus variants, the British B.1.1.7 and a local double mutant B.1.617, may have accelerated the spread. The Quad spirit of cooperation ran into vaccine nationalism when India’s pleas to the US for assistance were rudely rejected.

The public discourse started getting toxic, especially in the social media, with escalating criticism of Prime Minister Narendra Modi and his deputy, home minister Amit Shah, for campaigning without masks and amidst mammoth crowds. The Election Commission too irresponsibly conceded the BJP’s desire for the eight-phase, month-long polls in West Bengal.

Alongside, the lackadaisical vaccination programme started, with frontline workers and then the older, more vulnerable population. But as the vaccination was stepped up, the demand began outpacing the supply. Instead of being the “Vishwa Guru” and global factory for vaccines, India now blocked exports. The Serum Institute of India, producing the AstraZeneca vaccine Covishield, and Bharat Biotech, producing Covaxin, fell behind their production targets. The European Union sued SII for breach of commitments. In turn, it complained its production was being hampered by US restrictions on raw material exports.

India-US relations came under strain as public opinion in India soured. Both sides failed to communicate their respective concerns properly. In America, newly elected President Joe Biden assumed office, promising to undo the harm done by the unscientific and populist approach of his predecessor Donald Trump. He invoked the old Defence Production Act (DPA), within two weeks of assuming office, to marshal all resources. His target of 200 million shots in the first 100 days was achieved before time. The US also started building up a strategic reserve of vaccines, now amounting to over 300 million surplus shots. But the DPA constrains the export of vaccines. Consequently, the four million doses given to Mexico and Canada were called a loan.

The US had other considerations for not sharing its vaccines. Both Pfizer and Modena have obtained liability protection from the US government for civil or criminal liability for any untoward health episode post-vaccination. If exported, they would seek similar protection from the importing nations.

Only about one-third of the US population has been fully vaccinated so far and thus a fresh surge of cases was troubling. The new spike is driven by mutated versions, the efficacy of vaccines against which is still unclear. The British mutant B.1.1.7 is believed to be 60 per cent more contagious and 67 per cent deadlier. As per the Centres for Disease Control (CDC) data, adults in their 20s to 50s are getting hospitalised in the Midwest, South and Northwest. The New York Times said: “From Minnesota to New Jersey to North Carolina, younger people are making up a growing share of hospitalisations”. Currently, 45,000 persons are hospitalised in the US.

Thus, an India unprepared for the second surge ignored US concerns when publicly seeking relaxations of DPA restrictions on the export of vaccine production raw material and a possible loan of unused AstraZeneca vaccines, so far unapproved for emergency use. The initial rejection was taken as a snub and allowed to play in public. China’s glee was palpable as its English mouthpiece Global Times chided India for depending on the US and not seeking Beijing’s help. Russia also rushed to supply oxygen, etc.

When India’s mishandling and the fresh surge became lead news in the US media, and after mass cremation pictures appeared on the front pages of its major newspapers, the Democrats and the Biden administration finally woke up. The liberal wing of the Democratic Party, which the Indian government and especially external affairs minister S. Jaishankar chided over their criticism of India’s Kashmir policy, now came to India’s rescue. US national security adviser Jake Sullivan tweeted on April 25 that after he talked to India’s NSA Ajit Doval the US agreed to “deploying more supplies and resources” to aid India as both nations had the greatest number of cases globally. Among this would be raw materials, protection kits, therapeutics, rapid diagnostic kits, ventilators, etc.

The US Development Finance Corporation will aid the expansion of vaccine manufacture by Hyderabad-based Biological E Ltd, which has finished its Phases 1 and 2 trials. Baylor Medical College has provided the proven and simpler yeast-based expression technology. The company is to produce one billion doses by the end of 2022 at an affordable price. This is the magic bullet for the developing and underdeveloped world, now without access to a vaccine. Africa doesn’t have even a vaccine producer now. Globally, the developed nations, with 16 per cent of the world population, have cornered 52 per cent of vaccines. But the US has still not cleared the export of unused AstraZeneca vaccines. President Joe Biden said the US was helping India in its hour of need as India it them in the past, but the focus is on capacity building.

How does India return to being seen as the world’s vaccine hub rather than a troubled victim? Political mismanagement, electoral partisanship, religious pandering and the lack of foresight have damaged India’s image. It has left China smirking, though on the positive side Pakistan’s political comments and public opinion have been empathetic. The current electoral cycle ends on April 29 in West Bengal, but immediately another begins as the Uttar Pradesh Assembly election is due in February 2022. Has the government learnt the lesson that public health and safety must remain above politics?

Also, US help will come laced with unsaid conditions. For one, majoritarianism and the democracy deficit may invite more forceful US intervention. India’s Kashmir, Pakistan and Afghanistan policies will also see closer US monitoring. The mismanaged pandemic at home will diminish the government’s political space both at home and abroad.

A delay that violates the basic rights of children