But if growing up is getting to fifty then it isn’t miles away, and with my two left feet, dancing’s not on my bucket list 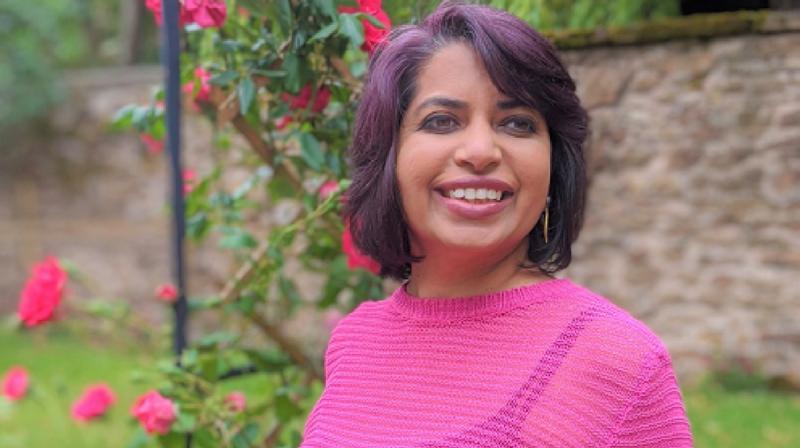 The author in her garden, showing off her purple streaks.

Watching The Masked Dancer UK with my children last weekend, I was struck by the age, élan, and agility of two of the three finalists, both in their mid-fifties. When I grow up, I said to myself, that’s how I want to be. But if growing up is getting to fifty then it isn’t miles away, and with my two left feet, dancing’s not on my bucket list.

Of course it’s not about dancing at all, which is clearly just an extension of these fifty-somethings’ love for life and who-gives-an-eff-about-convention stance. It’s a metaphor for the verve with which they’ve waltzed into aging.

Convention, you see, would want us to age in a particular way. When they talk about aging gracefully, they don’t mean you should enter a televised dance contest with competitors half your age. Or wear body-hugging outfits, or get in society’s face. They mean you should disappear.

Disappear in a manner however, that suits society; hovering obsequiously on its periphery. You still need to turn up and be counted at funerals. At family functions that are any fun, you are lumped with children to look after; eliminating you from the action. In fact, wherever there’s a thankless job, without recognition or reward, you’re the one it’s pegged for. Because, after all, as the scriptures confirm, you’re at that stage of life — Sanyas — when you must renounce it all. Even far-sighted Shakespeare wrote about the “spectacles on nose and pouch on side (colostomy bag?), shrunk shank, and childish treble” of the post-fifty brigade. But he died at 52, without ever having experienced this stage, so what did he know?

I know that if I’m to toddle back to my childhood again, I will cherry pick, like a child might, the bits I want to swallow, spitting the rest out like unpalatable pips. Like the youngest kids, we are undoubtedly more vulnerable to diseases (as this pandemic has proved). Like them as well, we are not at the peak of our physical strength; not as robust as folks in their teens, twenties, or early thirties. We’ve been there, got the t-shirt, fallen over inelegantly onto the other, twilit side, and got it badly besmirched. But there are oh-so-many advantages to being weather-beaten and worldly-wise.

I know this before I’ve got to fifty because this locked-down pandemic has been an enforced aging. My stay-at-home-cooking-baking-pottering-in-the-garden avatar has descended on me ten years ahead of time. So have the array of diseases it has accelerated, which, had I been allowed to remain active and less anxiety-ridden, I may have sidestepped nimbly for another decade. But you could also look at this imposed maturation as early acquisition of wisdom; a bringing into sharp focus of all that really matters in life.

Yet, because growing old is so reviled by popular culture, and strikes such terror in the human heart, I too was a bit iffy about entering my thirties, but it turned out infinitely better than the decade before that. Arguably, my forties have been even more rewarding (though it does help to have a failing memory; lifting each decade I’m living through to the top). The fifties might be the best yet. Limbering up for it as I have been through this speed-aging pandemic, I feel ready. I feel almost Zen.

Isn’t that a lot like Sanyas? Disappearing with ‘dignity’ aka. not making a fuss? No, because vanishing only as much as we want to, from society’s bleeping radar, is a whole other trip called freedom.

I’ve never known more liberty than now; a couple of years, plus a couple of months, away from my half-century. As we grow, conventions bind us and social expectations pin us down, till one day we discover we’ve been put out to pasture. With society’s gaze irrevocably averted in this so-called second childhood, we can be ourselves again like carefree kids.

Not one for superficial chatter, lockdown’s one boon has been its cessation, and I’ll never again feel compelled. Yet, I’m deeply interested in the welfare of those I love, as well as the world at large. But both these concerns require in-depth conversation and not trivial natter.

Nor will I wear anything ever again that makes me squirm. Not high heels, except when in the mood. And even less often — bras! Both socially imposed, they’re uncomfortable, if not injurious to health. And do they really make us more presentable? To whom exactly? Those who care will want us to be comfy, and to everyone else I have this to say: go find something sensible to rant about instead!

Strenuously discouraged from dyeing my hair purple recently, on the grounds that it was unbecoming for my age, I went ahead. It caused a few jaws to drop undoubtedly, but well-wishers and my mirror loved it.

So, come and see me by all means, wild-haired in my flats and ganjee, looking more like my Dadu than ever, and as unwilling to indulge in frivolities.

This freedom goes way beyond the trappings of course, though not having to toe the line with even these are considerable victories. Age is then an invisibility cloak, but one that confers a powerful forcefield, allowing us to be ourselves, even as it embargoes the narrow-minded and the nasty.

Growing older and less decorous, like children but in reverse, because we know better now and our bodies won’t conform anymore anyhow; society begins to give us a wide berth, not just from disinterest but fear! No longer hounded to deliver on this hide-bound expectation or that, there’s peace at last.

Age is indeed more than just a number; it’s a wondrous new world.