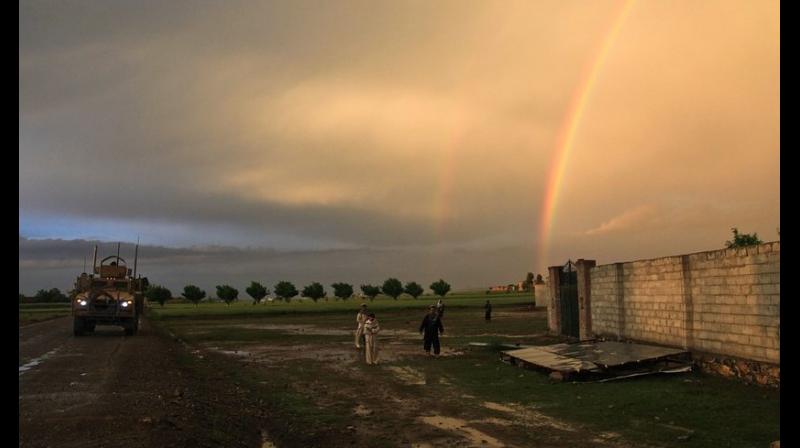 Nations can have long memories and diplomacy can become the victim of its past actions. Representational Image. (Twitter)

Much analysis has app-eared both in print and on television and the electronic and online media on the rapid territorial gains made by the Taliban in Afghanistan after the sudden American troop withdrawal, well in advance of the August 31 deadline. Opinions have differed widely on whether this is a replay of the tragedy of the 1990s when the Taliban rose rapidly to fill the power vacuum in Afghanistan and capture much of the country and eventually its capital Kabul in 1996? Or that the China-Russia-Pakistan axis will force a peace deal if the Taliban are unable to overthrow the Abdul Ghani government in Kabul by force quickly. The latter conclusion is based on the assumption that none of the regional powers really want a protracted civil war and the attendant instability in the neighbourhood.

India is caught in a peculiar dilemma. Indian foreign policy was adjusted by Prime Minister P.V. Narasimha Rao to the post-Cold War situation, then perceived as a unipolar order, in 1991. Since then, a consensus has existed amongst the two main national parties in India that the United States, the sole hegemon, needed handling and much closer engagement. The issue was how to balance this policy tweak against India’s long-standing policy of nonalignment for close to half a century, which was a tried and trusted paradigm for managing international relations in a polarised world.

Since 1991, Indian foreign policy had to manage these two desires — to draw closer to the United States and yet maintain the nation’s strategic independence. In a sense, the policy also rested on our domestic politics remaining secular and inclusive. When the Iran-Iraq war began in 1980, India continued to deal with both, despite even training Iraqi pilots. The reason was the need to maintain peace at home between the Shias and Sunnis. Similarly, the stress on foreign policy was handled despite the widespread disappointment in the Islamic world over the destruction of the Babri Masjid.

Prime Minister Atal Behari Vajpayee had to face the challenge of keeping domestic and foreign policies in sync after the 2002 Gujarat riots. But for Vajpayee the need was supreme to maintain the goodwill of Iran in order to counter the rise of the Pakistan-supported Taliban. After the United States intervened in Afghanistan in 2001, the geo-political environment mutated even further to reflect perceived US dominance of the region. Concomitantly, first Prime Minister Manmohan Singh and then Prime Minister Narendra Modi tailored India’s approach to the Islamic world to America’s priorities.

After the election of President Donald Trump in the US, the fissures got further exacerbated as he not only withdrew from his predecessor Barack Obama’s nuclear deal with Iran but backed the young de facto rulers of Saudi Arabia and the United Arab Emirates to create divides particularly amongst Gulf nations and generally in the Islamic world. The Indian government gambled on aligning much more closely with the Trumpian worldview, besides pandering to his ego at a personal and political level. The result has been that India is now working belatedly to restore lost options. External affairs minister Subrahmanyam Jaishankar made two quick visits to Qatar to both allay concerns about India being in the Saudi and Emirati corner and use the good offices of Qatar to reach out to the Taliban. The sudden need has arisen as new US President Joe Biden made his intent very clear to exit from Afghanistan whether or not the conditions were created for a peace deal between the Taliban and the Afghan government. That condition precedent to US troop withdrawal was implicit in the US-Taliban deal signed by the Trump administration in February 2020.

Strategically speaking, the Indian government faces the consequences of US hegemony giving way to neo-bipolarity, with an axis of China-Russia resurrecting a fresh challenge to the United States. This leaves India, seen as informally aligned with the US approach to the Islamic world, in a quandary.

Unlike in the late 1990s when the rise of the Taliban in Afghanistan was countered by the India-Iran-Russia axis, two of those powers have other priorities. A new Quad is emerging with the US, Afghanistan, Uzbekistan and Pakistan wanting to create regional connectivity. Russia has its own ideas about working with Pakistan, amply demonstrated by its foreign minister clubbing a visit to New Delhi with one to Islamabad. Iran may humour India by having its President-elect Ebrahim Raisi receive Mr Jaishankar, but it will have its own outreach to the Taliban. At the same time, however, Iran is keeping its options open by backing Ismail Khan and enabling him to resist the Taliban’s capture of Herat.

Against this background, the visit to New Delhi of Afghan Army chief Gen. Wali Mohammad Ahmadzai on July 27-30 assumes importance.
The rise of militias to supplement the defensive action of the Afghan Army reminds one of the chaos of the 1990s. The reality is that the Taliban have now apparently seized half of Afghanistan’s 419 districts, compared to just 81 last month.

Suddenly, US air support became available as the Taliban built up pressure on the fringes of the country’s second largest city, Kandahar. But it came with the caveat that this may not be available after August 31, the declared deadline for the US troop withdrawal. After that the US will have only 650 troops to protect the US embassy and Kabul airport.

Pakistan is both thrilled over the rapid Taliban gains but also somewhat concerned. It is keeping the Taliban appeased by publicly maintaining that it would not allow the US to have a base to conduct air operations in Afghanistan. At the same time, it is trying to extract a promise that the Taliban will purge all elements supporting terror attacks in Pakistan, like the Tehreek-e-Taliban Pakistan (TTP).

The moral of all this is that many years of assuming that US hegemony was permanent and that closer alignment with the US was a desirable if not necessary choice is today leaving India with diminished options. The majoritarian domestic politics of the BJP allowed more leeway to play favourites in the Islamic world or distance themselves, say, from Iran if it pleased the US. After the US withdrawal, many of those “undesirable” entities are holding crucial cards that India needs. Nations can have long memories and diplomacy can become the victim of its past actions. South Block has its work cut out in the rapidly degrading environment to India’s west.