Merkel is often billed as the world’s most powerful woman. 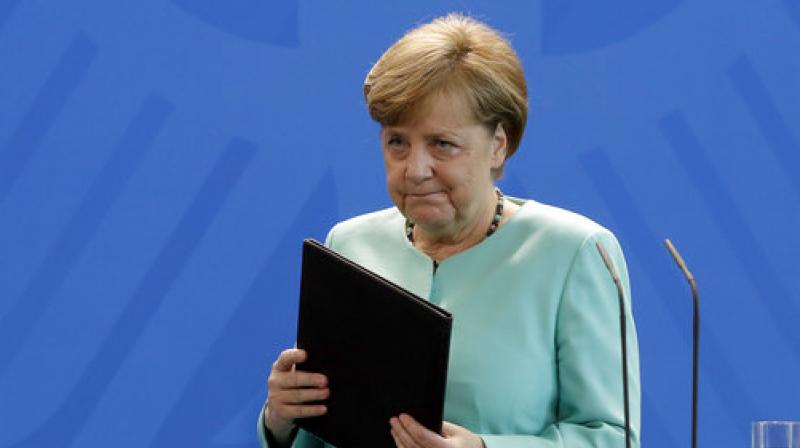 With Angela Merkel winning her fourth term as German Chancellor in Sunday’s general election, the voters have spoken. It is a mandate for continuity and a feeling of being comfortable with a leader who is cautious as well as skilled in protecting her country’s interests and prosperity. At the same time, voters have punished her for her refugee policy by reducing her party’s margin and swinging to the far-right.

There was a time not long ago that Ms Merkel was fighting against majority sentiments by welcoming more than a million largely Muslim refugees from the Syrian and Iraqi conflicts. But she deflected criticism and did a dubious financial deal with Turkey to drastically stem the flow.

Germany has changed, and is still changing. For one thing, the far-right Alternative for Germany (AfD) has entered Parliament for the first time since the Second World War. It has been feeding on anti-migrant sentiments, is sceptical of the European Union and is said to shelter neo-Nazis. AfD is set to become the third-largest party in Parliament, which is likely to fragment the political landscape.

After ruling the country for 12 years, this will be Ms Merkel’s most portentous term after she crosses the hurdle of forming an uneasy three-way coalition with the Free Democrats and Greens, a necessity stemming from its system of proportional representation. The Social Democrats, her last coalition partner, did poorly under the leadership of Martin Schultz, but the liberal Free Democrats, once the CDU’s favoured partner, are back in the Bundestag after a four-year gap.

Ms Merkel’s personal relations with US President Donald Trump are decidedly cool, and she has made a point of suggesting that Europe must rethink its security policies. The White House has been driving the point that all members of the North Atlantic Treaty Organisation (Nato) must pay two per cent of their GDP, a target Germany and many other members are yet to achieve.

But Ms Merkel’s success in her new term will, in substance, depend upon how well she can form a coalition with France’s new President, Emmanuel Macron, who is seeking to reform his country’s economy. This is specially true in view of Britain’s impending departure from the European Union. Besides, she has to rework her tight money policy, which has made her country rich but left fellow EU members disgruntled.

Ms Merkel is often billed as the world’s most powerful woman. With an unpredictable President in the United States, her responsibilities as a world leader have increased. At the same time, Germany’s past continues to haunt its citizens and rulers alike and there is an inevitable hesitation in claiming a leadership role, particularly where military might is involved. Cautious by nature and having grown up in Communist East Germany, Ms Merkel is wary of Moscow even though she knows its ways and speaks Russian.

Mr Macron has ambitious plans for France and the EU, particularly in promoting integration. But unlike his meteoric rise, his popularity has been ebbing and his capacity to fulfil his ambitions is in doubt. Ms Merkel can take European integration forward only as far as French circumstances permit. Especially with Brexit, the French-German engine is the vanguard in shaping the continent.

First, Ms Merkel has to get her coalition arithmetic and politics right. Next, she needs to evolve a broader role for her country in a Europe frustrated with President Trump and some former Communist EU members signalling illiberal tendencies with Hungary’s Viktor Urban officially seeking an “illiberal” system and Poland blatantly politicising its judicial administration.

Germany needs to come to terms with today’s and tomorrow’s world. It has paid for its unspeakable conduct during the Nazi era in reparations and otherwise. A nation cannot always live in the dark period of its past although there are any number of leaders using the Nazi epithet to bully the country. And “neo-Nazi” has now become another ism to add to the list of the modern world’s bewildering spate of beliefs.

Britain was decidedly uncomfortable with the collective leadership idea of the European Union because it never got over the loss of its own impressive colonial empire. It is now discovering the cost of leaving the EU as the painful process drags on, seeking a two-year grace period after it leaves the group. Others are defying the EU in more subtle ways, such as the former Communist members’ refusal to take in any Muslim refugees.

Ms Merkel’s first task therefore is to discipline the erring EU members and to drive home the point that they have no option but to observe the rules of the club in an age in an uncertain age with the US shedding its world responsibilities, with giving an opening to China. If Europe cannot take its own defence seriously, it cannot complain about American vacillations.

The German Chancellor must recognise that she has not merely to cope with an assertive China that is seeking to bring its Road and Belt Initiative to the heart of Europe but a Russia that wants to be counted. Apart from the charge of Moscow’s interference in European elections, Ukraine is a major stumbling block to improving relations. Ms Merkel has already played a part in seeking peace in Ukraine’s east with its Russian-speaking pro-Moscow population, but the agreements have not worked.

The West imposed sanctions on Russia after its appropriation of the Crimean peninsula, later to be followed up by intervention in eastern Ukraine. The mistake by Ms Merkel, and by Europe’s and America, is that they have converted the country into a trophy won in the Soviet Union’s defeat in the Cold War. Looking at Ukraine with its substantial area and proximity to Russia and its very close religious links with Russian culture and civilisation, no Russian leader would accept Ukraine being hijacked by the West. Crimea, we may recall, was given away by Nikita Khrushchev to Ukraine in an era when the latter was a part of the Soviet Union.