Will the BJP use Nitish to get own CM in Patna? 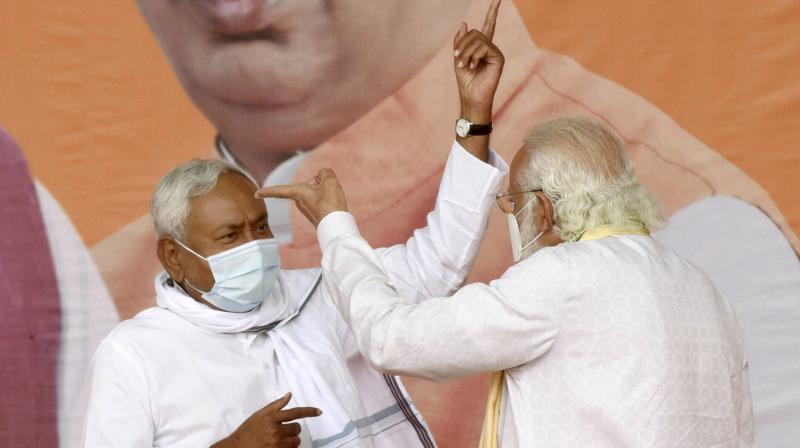 There are two somewhat related perspectives to keep in mind with regard to the coming Bihar Assembly elections, where the first votes are to be cast on Wednesday, October 28. These have been largely overlooked in the media and in the facile opinion polls, which appear to have partly relied on the 2015 polling data on caste arithmetic as if this was the sacred gayatri mantra itself, besides strongly hinting that the presumed magic of Prime Minister Narendra Modi could safely take the ruling alliance home.

As we’ll see below, at least some crystal-gazers may be rather hoping that it will be just one part of the NDA — namely the BJP — that will reach the dry shores, no matter what the overt optics.

The first consideration stares us in the face, though we have been oblivious. It is quite simply the fact that the failure of the three-time chief minister Nitish Kumar’s government in coping with the dreaded Covid-19 pandemic, besides the mass return home of the poor from the country’s major cities regarded by Bihar’s massive pool of the labour force as the nation’s employment capitals in the absence of any worthwhile prospects at home, and the recent floods that played havoc with people’s already wretched lives, are stark truths that frame the real narrative for this election.

Without ambiguity these point to the Nitish government’s casual disregard of the suffering of some of the poorest people that there are in the country. This can be seen in leaders of the ruling alliance speaking without pause about roads repaired or built more than 10 years ago, and their breathlessly recalling the serious uptick in crime that was relevant two decades ago, before the new generation of voters was born.

Parroting pre-history is part of an untidy and scarcely convincing strategm of the JD(U) and BJP to hide policy failures and executive inaction, and meant to help them smoothly glide over the wretchedness they have presided over for most of their 15 years in office — in other words, to trick voters.

Does the trick work? Among some sections, yes — defined in the main by class. The bulk of these are the state’s upper caste and upper crust, not that anyone’s vote can still be thought of as being immutable.

But ordinary folk have not forgotten the humiliation and the hurt caused by the CM urging them not to come trudging back to the state though, with the national lockdown suddenly announced by the Prime Minister in March, it was clear that they had no money to pay rents in metropolitan cities and no money to eat. They also calculated that, if the disease took them, it was better to die in their unpretentious homes in the village than on the uncaring roads of the big cities. Mr Kumar’s self-serving statements are being recalled at election time.

With the aim of building a strong caste support base of the poorest sections in his favour, Mr Kumar’s self-serving administrative decisions divided and sub-divided big chunks of the OBCs and the SCs into super-fine strips till they could not be sliced up any further and gave them some benefits in the early part of his tenure to secure their undying loyalty.

However, if the wildly cheering, pressing, crowds at the poll rallies of young RJD leader Tejashwi Yadav, the CM candidate of the Mahagathbandhan — the alliance of the RJD, Congress, and all shades of the Left in Bihar, which are ranged against the ruling NDA — are any indication, then attempts to chisel the caste arithmetic may prove to be of little avail for the chief minister.

And the reason for this is plain enough. Mr Yadav speaks only of the crushing burden of unemployment, which has made even the upper castes reel, as he promises a million jobs on arrival (as CM — replacing Mr Kumar). It is this which makes the sentiment for “badlao” (change) in Bihar palpable, although elections are notoriously hard to call. The media, except in the past few days, and the opinion polls, missed this, though it was out there, large as a football.

So gobsmacked is the ruling alliance that the BJP is now promising the Covid vaccine free (only) for Bihar, such is the desperation. In the event of an anti-climax, it is the EVM factor that is likely to be blamed, and people are watching keenly. The political timbre and makeup of Bihar is different from next-door Uttar Pradesh, although both are Hindi-speaking. Bihar can be volatile across the board. This is where Jayaprakash Narayan’s all-encompassing movement was bred, and also Communists of every hue.

The second factor to watch out for, mentioned above — relating to JD(U) leader and CM Nitish Kumar’s unravelling — is the ambition nursed in the BJP’s bosom to have its own chief minister in Bihar for the first time, even if as part of an alliance. Other than Punjab and J&K (now, alas, only a UT), Bihar is the only state in North India where there has never been a CM from the BJP. That is Bihar’s uniqueness among the Hindi-speaking states.

If this is understood, then the side-court play — the Chirag Paswan phenomenon and the rushing of key RSS people to get the election nomination of Mr Paswan’s LJP, otherwise no great shakes as a political force — does not remain obscure. It is not clear how it will pan out, but one thing is clear — Mr Kumar may get to rue that he let the BJP ride the waves stepping on his shoulders even as he fooled himself that he stood for secular politics and secular values while canoodling with the BJP-RSS.