Indian military officials just confirmed that the PLA has sent 50,000 troops to the India-Tibet border 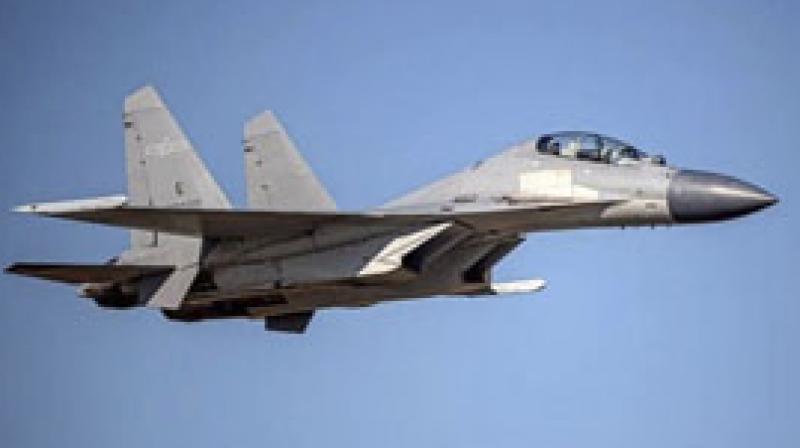 Ihoto released by the Taiwan Ministry of Defense, a Chinese PLA J-16 fighter jet flies in an undisclosed location. (AP)

On October 17, the Financial Times reported that in August 2021, the Chinese People’s Liberation Army (PLA) launched a supersonic nuclear capable missile which encircled the globe, to the shock of the American military. Days later the news leaked that the Chinese had in fact tested two hypersonic missiles. White House press secretary Jan Psaki downplayed the threat, saying: “We welcome stiff competition, but we do not want that competition to veer into conflict.”

The Asian media was not so sanguine about China’s wanton display of force. In an article entitled “China can now nuke any nation from space: guess who empowered them: Bill Clinton”, Indian journalist Vikrant Thardak recounts the sordid history of President Clinton’s secretary of commerce Ron Brown’s trip to China in 1994 to broker the sales of US nuclear technology to the Communist Party of China (CPC). “The brazen stupidity on Clinton’s part explains why the Chinese do not take diplomacy seriously with the USA. The US elites have no spine left to stand up to Chinese aggression.”

The CPC’s mouthpiece Global Times declared: “The West, led by the United States, will hype and smear China’s breakthrough as militarisation … This mindset serves only Western-dominated hegemony.” New Delhi’s XTV News reported: “China’s hypersonic missile test was a warning to the US not to interfere with an invasion of Taiwan and India. After Biden’s disastrous retreat from Afghanistan, China sees weakness, so Xi Jinping will seize the opportunity to push the US out of the Pacific region.”

On October 2, one day after the People’s Republic of China marked its 72nd National Day with a massive military parade in Beijing, dozens of PLA bomber jets flew across Taiwanese airspace. Chinese engineers were photographed touring the Bagram airbase in Afghanistan, 400 miles from Xinjiang, where the Uyghurs are being slaughtered. Indian military officials just confirmed that the PLA has sent 50,000 troops to the India-Tibet border — at 2,167 miles, it is the longest militarised zone on the Asian landmass — and equipped with barracks, helipads, surface to air missiles. In an interview with India’s News X, Gen. K.K. Sinha said: “China would not install so many troops on our northern border without intending to strike India. And to strike soon.”

Another little told story of great import is the CCP’s domination of the United Nations and its agencies (despite the fact that the United States is the largest UN donor and host to the UN headquarters in New York City). China, the only Asian nation with a permanent seat on the Security Council, forbids any discussion of the Uyghur genocide. In September 2021, China hosted UN peacekeeping forces for “anti-terrorism drills” at a PLA base in Queshan, China. Codenamed “Shared Destiny 2021”, the troops from China, Mongolia, Pakistan and Thailand, practised security patrols, construction of temporary bases, flying drones with loudspeakers to spot bombs which were disposed of by robots. This story received scant coverage in the West, but all across Asia it was seen as a further confirmation of China’s master plan for global domination.

If a US company wishes to enter the Chinese market, there is to be no discussion of the “Thee Ts” — Tibet, Turkestan and Taiwan. The Western powers have meekly complied; not one officially recognises Taiwan’s sovereignty. In 2009 President Barack Obama declined to meet the Dalai Lama, giving the CPC what it craved — a mortal blow to the Tibet movement; the lone activist group that for decades has exposed the CPC’s crimes against humanity. The CPC has killed all discussion of their control of the vast Tibetan plateau, but to ignore Tibet is to misread how the Chinese occupation contributes to economic and military instability in Asia.

When India gained its independence from Britain in 1947, it lost a lot of territory with the partition of Punjab and Bengal and the creation of East and West Pakistan. After declaring victory over Chiang Kai-shek’s Nationalists in 1949, Chairman Mao invaded Xinjiang in 1950 and Tibet in 1951, thereby doubling the CPC’s landmass. Tibet and Xinjiang, the so-called “Western Treasure Houses,” are lands filled with riches in minerals, timber, water, and are vital to China’s control of Asia. In 2000, China launched “Xi Bu Dai Fa” — the Opening and Development of the Western Regions — which was the pilot project for its global Belt and Road Initiative. Twenty years hence, Beijing now has crisp new railway and road links across Xinjiang and Tibet, which can swiftly deploy troops and weaponry all the way to Central Asia and the Indian border. Genghis Khan had once said: “He who controls Tibet controls the world.”

With global supply chains collapsing, the globalist narrative of “China’s Peaceful Rise” is being sorely tested. Was it prudent to have moved 80 per cent of American manufacturing to Communist Chinese factories which are now running short of power? Should the United States continue to fund the Chinese military with US pension funds? Will the Western powers sit on their hands and blush if the PLA strikes Taiwan? What if Afghanistan’s Taliban rulers, now equipped with US weaponry, align with the Chinese troops deployed in Tibet, in a bid to slice off Jammu and Kashmir from India?

A diplomat posted from New Delhi: “If Taiwan falls, all democracies in Asia are at risk. If India’s democracy falls, the whole world is at risk.” President Biden, it’s now time to decide — which side are you on?